Iraq held elections May 12th.  There has been a strong effort to destroy the legitimacy of them.

Kirkuknow‏ @Kirkuknow_DT 3h3 hours ago
The head of the United Nations Mission in Iraq #JanKubiš, has demanded a recount in a number of areas including Kirkuk. @Kirkuknow_DT 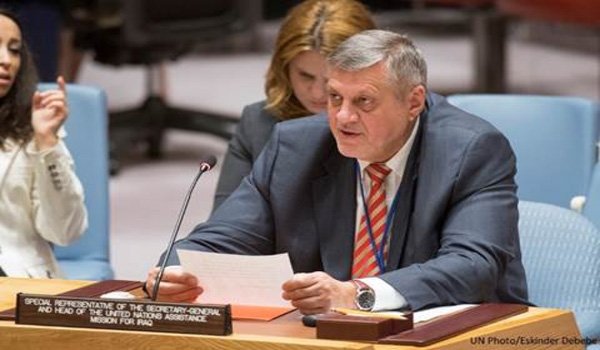 
Jan Kubis demanded a recount?  Really?  Because "demand" is a pretty strong word.

And Jan appeared before the United Nations Security Council yesterday to brief them on Iraq.

On 12 May 2018 – within the constitutional time-frame- Iraq held elections to its national parliament, the Council of Representatives. Prime Minister Haider al-Abadi, after the close of the polls, noted that τhe country held the elections on time, that people were able to cast their votes and select their representatives freely and safely and that the liberated areas witnessed a free voting process for the first time after the victory of the Iraqi forces and the defeat of [the Islamic State].
The Secretary-General on 13 May congratulated the people of Iraq on the holding of parliamentary elections and stated that following the military defeat of [the Islamic State], the elections represent further progress in building a stronger Iraqi democracy. He saluted the tireless efforts of electoral officials, party agents and the security forces in making the elections largely peaceful and orderly.
Following the elections, international partners, including the governments of Kuwait, Qatar, Iran, Turkey, United Arab Emirates, United States of America, United Kingdom, and European Union also congratulated the Iraqi people.
Madame President,
The elections held in a generally calm and stable environment were marked by a low voter turnout: the Independent High Electoral Commission (IHEC) informed about the participation of 44.52%, just 10.8 million out of 24.3 million eligible voters, a significant decrease in comparison with previous national elections in Iraq after 2003. The new parliament will also witness a massive turn-over - according to the preliminary results less than 100 of the over 300 incumbent MPs have secured their place in the new Council of Representatives (CoR). The decision by more than half of the voting population not to exercise their democratic right sends a strong signal to the elites ruling the country since 2003. I urge the Iraqi political elites to draw the necessary conclusions on the need for improved representation, justice for all, democratic accountability and good governance void of corruption, sectarian quota system, nepotism and patronage.
I also urge political leaders to ensure the full participation of women in negotiations on the formation of the next ruling coalition and the government, and their representation at the highest levels in Iraq’s political and decision-making structures in the parliament and the government as pledged by many political leaders in the election campaign.
Madame President,
Following the closure of the polls and the announcement of the preliminary results, many Iraqi political leaders publicly endorsed the electoral process including the Prime Minister and the President. They continue to urge a timely conduct and conclusion of the complaint process, certification and acceptance of the results, and speeding-up of the formation of the new government, within the constitutional timeline and in accordance with relevant legal procedures. Some other political forces and leaders have raised concerns over some of the technical shortfalls encountered with the electronic vote tabulation devices, as well as reports of fraud and vote rigging, active intimidation of voters including by some armed formations, and political interference. They have demanded the recount of votes in some governorates, the annulment of results of out of country voting and voting of the IDPs, and even fresh elections. Amidst questions about the legality of their decisions, including from the IHEC, on 28 May the Council of Representatives voted to request the IHEC to undertake the manual counting of 10 per cent of the ballot boxes that could trigger the manual counting of all the ballots in case of a discrepancy of 25 percent and above. It also requested cancellation of the Out of Country and IDP voting.
On 24 May, the Council of Ministers (CoM) decided to form a High Commission to investigate reports and documents pertaining to the elections. The High Commission already referred the IHEC to the Integrity Commission, a move rejected by the IHEC as an interference in its independence.
Six Kurdistani parties have questioned the credibility of the electoral process in the Kurdistan region and have been calling for a recount of the votes in the Kurdistan governorates, and even for the re-run of the elections. On the other hand, the Kurdistan Democratic Party and Patriotic Union of Kurdistan have announced their satisfaction with the outcome of the elections and their intention to start dialogue on coalition building with political parties in Baghdad.
In Kirkuk governorate – one of several hotspots of complaints - the situation remains volatile, with Turkmen and Arab parties, demanding manual recounting of the election results while the IHEC has complained that they have obstructed their work.
On 17 May, I called on the Electoral Commission to act expeditiously and seriously to address all complaints including, as necessary, the conduct of a partial manual recount in selected locations, notably in Kirkuk. I stressed the importance of undertaking such measures in full transparency, witnessed by stakeholders, to strengthen confidence in the process. I also called on all political actors to uphold the peace and to remain committed to resolving any electoral disputes through the established legal channels.
We urge the independent electoral management bodies to adjudicate all appeals properly, fully and in time, to enable corrections of the problems, justice and the timely certification of the final election results. I also wish to highlight the readiness and availability of United Nations electoral advice and expertise, in support of any activities and measures that may be required to retain confidence in the process, also in the light of the forthcoming Provincial Council elections across Iraq on 22 December and Kurdistan Regional elections on 30 September this year.
Given the controversies around the CoR elections, the regional Kurdistan High Electoral and Referendum Commission has decided not to use electronic vote tabulation machines. UNAMI stands ready to advise and support that electoral process.

I'm sorry, where in the above does he call for a recount -- let alone "demand" one?  He doesn't.


Nor does UNAMI imply he does.

The United Nations -- with or without Jan -- does not demand recounts.  Why is that so difficult for KIRKUKNOW to grasp?  Or is it that they do grasp it but figure most people will read their Tweet, see the photo and have no idea this was a regular update to the UN Security Council?

The efforts to discredit the results of the elections is troubling many.  The current prime minister Hayder al-Abadi has insisted -- as have many Iraqi legal experts -- that any questioning of the elections must take place in court because Parliament has no jurisdiction over the results.  The Constitution requires Parliament to pass an election law.  That is it for them the election.  After the election is over, they are supposed to seat and name a president and then a prime minister designate is named who has 30 days to form a Cabinet (that's nominate each Cabinet member and have each approved by the Parliament in thirty days).

Displeasure with the results does not allow for rewriting the country's Constitution. 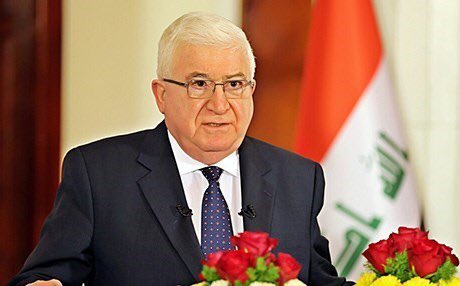 The results are the results and politicians should focus on forming a government.  It's May 31st.  How long are they planning to take?  In 2010, it took over eight months to form a government.


When people lie about what the UN did or did not say, it's obvious that more than a few believe they can fool others.  "I can live without you," Tina Turner sings on "When The Heartache Is Over" and that's certainly true of the Iraqi people who've seen politicians put forward their own interests while ignoring the Iraqi people.

Barzan Sadiq‏Verified account @BarzanSadiq May 28
#US congress designating Asa'ib Ahl al-Haq militias as a terrorist group, but i wonder if #US is aware of that Asa'ib got 15 seats in #Iraqi elections? US policy is worth to worry about in #Iraq.
3 replies17 retweets30 likes

The US media has done very little but cover the "shock" over Shi'ite cleric and movement leader Moqtada al-Sadr's victory.  Even that coverage has been vastly limited.  Americans who know anything about the elections are most likely to know about Moqtada's victory but most probably are unaware that elections even took place earlier this month.  It was not a 'big' story in the media.

That's why we need licensing for all channels.  This was almost an issue on Laura Flanders' AIR AMERICA radio show last decade.  A listener had a question regarding the cable channels and what could be done in terms of bringing them to the same terms as broadcast.  But the FCC Commissioner (one we applauded on the left) was such an idiot he couldn't get the question and instead went off on 'decency standards.'

But there does need to be some overseeing body.  Not for 'decency' or other nonsense.

The US is at war.  There are US troops in Iraq.  Tons of dollars -- taxpayer dollars -- have been sent to Iraq.  But the media doesn't feel Iraq is a story to cover?  In what world?

Licensing of some form could force, for example, MSNBC talk shows to address the topic of Iraq.  That might not be a good thing considering the output on MSNBC but at least the average American would be aware that US troops remain in Iraq.


In terms of the Congressional delegation, Bryant Harris (AL-MONITOR) reports:


The House of Representatives unanimously voted last week on legislation requiring President Donald Trump to sanction “persons that are officials, agents, affiliates of or owned and controlled by” two prominent Iran-backed militias that operate in Iraq and Syria. The amendment from Rep. Ted Poe, R-Texas, to a must-pass annual defense authorization bill targets Asaib Ahl al-Haq and Harakat Hezbollah al-Nujaba, both of which are part of the Shiite-led Popular Mobilization Units battling the Islamic State.
Both militias joined with other Iran-backed military forces as part of the Fatah, or Conquest, political coalition, which came in second in the May 12 elections with 47 out of 329 parliamentary seats. Asaib Ahl al-Haq won 14 of those 47 seats, according to Iraq analyst Kirk Sowell, while Harakat Hezbollah al-Nujaba did not field any candidates.
“The US Department of Treasury will ultimately determine if the political wing constitutes an affiliate or entity controlled by” Asaib Ahl al-Haq, a Poe aide told Al-Monitor. “Congressman Poe believes [Asaib Ahl al-Haq] will likely be subject to these penalties unless it completely breaks all ties with the armed wing, renounces violence and acts solely as [an] Iraqi political party with no backing from Iran.”
“Political parties are about engaging in peaceful civil discourse, not about representing armed thugs who commit violent atrocities to achieve political ends,” the aide added.
The AL-MONITOR article leaves some questionable impressions -- intentionally or not.  First, this, at present, has nothing to do with Donald Trump (president of the US).  This has nothing to do with the Senate at present.  The House of Representatives unanimously voted -- that's pretty clear.  If anyone's confused, that means every member of the House present voted for it -- regardless of party identification.

The article also talks about (some of the) past history of Asaib Ahl al-Haq.

November 25th, six months ago, Asaib Ahl al-Haq made clear that they saw US troops in Iraq as the enemy and that, with ISIS defeated, US troops should leave and those who did not were worthy targets.