Kat:  44/876 came out a few weeks back which was a mistake, it's the ultimate summer album.  Sting and Shaggy team up bringing talent, experience and fan bases with them. 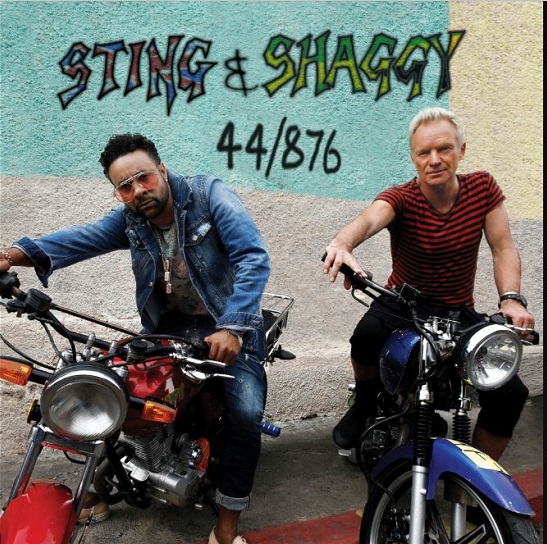 Shaggy's top ten hits in this country include "In The Summertime," "Bombastic," "It Wasn't Me" and "Angel."  He's also collaborated with, among others, Janet Jackson, Ryan Adams, Ben Harper, Sean Paul, Bonnie Raitt and The Roots.  Sting?

His hits include "If You Love Somebody Set Them Free," "Fortress Around Your Heart," "Russians," "We'll Be Together," "All This Time," "If I Ever Lose My Faith In You," "Fields of Gold" and "When We Dance."  Sting's collaborated with Cheb Mami ("Desert Rose"), Bryan Adams and Rod Stewart ("All For Love") and Eric Clapton ("It's Probably Me").  And, of course, before any of that, he was a member of The Police (lead vocalist and bassist) and their hits included "Roxanne," "Don't Stand So Close To Me," "De Do Do Do, De Da Da Da," "Every Little Thing She Does Is Magic," "Spirits In The Material World," "Every Breath You Take," "Wrapped Around Your Finger," "Synchronicity II" and "King Of Pain."

Teaming up brings out the best in each artist and 44/876 ranks as one of their liveliest albums.  You hear, for example, "Don't Make Me Wait" just once and you're humming it for days after.

"Morning Is Coming" stresses, "Wake up, it's a beautiful day" and it certainly is a beautiful song.  Sting and Shaggy bring a renewed energy to these tracks.  Especially with "Sad Trombone" which may be my favorite track on the album.


This is the strongest album Shaggy or Sting has released in years.  For both artists, a sameness was setting in and the albums appeared to be done by rote.  The life in these 12 tracks will surprise many.
44/876 is the perfect summer album -- perfect for blasting while laying out in the blazing sun, perfect for driving around, perfect for relaxing with in the shade.

I would love for Sting and Shaggy to reteam for a follow up but, even more than that, I'd love to see the energy and spontaneity found here show up on their next solo albums.