Kat's Korner: Another classic from Mavis and also check out Middle Kids

Kat: Just a few months ago, Mavis Staples released another classic album and this one was a live album, LIVE IN LONDON, in fact.  Three months later, she's got a new studio album, WE GET BY. 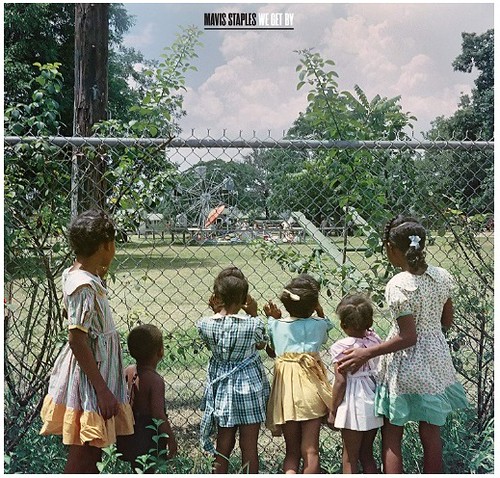 "Change" is a strong opener.  It's the sort of song so many of us wish Tina Turner would have followed up PRIVATE DANCER with -- gutsy and bluesy.  (It would have fit in on Tina's FOREIGN AFFAIRS or, for that matter, on TINA LIVE IN EUROPE.)

It's followed, however, by an even stronger song, "Anytime."

Yes, Mavis delivers the lyrics and then some.


But also making the song so great is this little stuttering musical figure that shows up at the end of every line.  It's a song with a highly skilled arrangement.  Have a listen.

"We Get By" finds Ben Harper joining her for vocals and it's probably the best Ben Harper duet since "With My Own Two Hands" (he and Jack Johnson on the soundtrack to CURIOUS GEORGE) and CHILDHOOD HOME -- the album he did with his mother Ellen Harper.


Ben's voice fits in so smoothly with Mavis' voice, that you wonder why the two don't do a duet album?

The bass really sings on "We Get By" but it completely takes over on "Brothers And Sisters."  By the time "Heavy On My Mind" rolls out, with Mavis really taking the time to slowly bring out this song and the emotions involved, you realize that the hot streak she kicked off in 2007 with WE'LL NEVER TURN BACK continues.

That makes WE GET BY Mavis' sixth classic studio album in a row.  And she's also had two classic live albums -- this year's LIVE IN LONDON and 2008's HOPE AT THE HIDEOUT.  That's eight classics in a row.

Joni Mitchell did nine in a row -- the studio albums LADIES OF THE CANYON through MINGUS (the next album after MINGUS, WILD THINGS RUN FAST was too spotty to be a classic so she ended that streak with eight) and the live album MILES OF AISLES.  She would then do five in a row -- DOG EAT DOG through TAMING THE TIGER.  But nine is her record.

So she's right behind Joni.  But there's Aretha.  Aretha Franklin has nine studio classics in a row -- I NEVER LOVED A MAN THE WAY I LOVED YOU through YOUNG, GIFTED AND BLACK -- and two live albums that are classics during this period (LIVE AT THE FILMORE WEST and AMAZING GRACE).  If we leave out ARETHA IN PARIS -- and we should, it might as well have been ARETHA IN VEGAS -- from 1968, that's 11 in a row.  If we're honest, it breaks Aretha's streak so we have to start over with SOUL '69 through AMAZING GRACE -- which is a streak of six albums.  (And I'm not counting the SOFT AND BEAUTIFUL because it was released by COLUMBIA five years after Aretha had recorded it and three years after she'd left the label to join ATLANTIC and become Lady Ree, The Queen of Soul).

So we can argue that Mavis has surpassed Aretha's record.  And she's only one album behind Joni.

"Take a chance on me," she sings on the ninth track.  And why not, she keeps delivering after all.


Out pour tears
Miss you dears
Late night calls of longing
Pressing play
On Marvin Gaye
Trying to right the wrongings Softly reaching over
For your touch upon my sleeve
It's always hard, so hard to leave
Just got in
How've you been?
You haven't aged a day
Look at us now
Remember when
We've come a long, long way
We tell ourselves stories
Only we can believe
It's always hard
So hard to leave

It's eleven tracks, eleven solid tracks, that make a cohesive statement.  It's a classic album.  If you're streaming or playing CDs, you can play the album all the way through.  If you're getting it on vinyl, yes, you will have got get up and flip over to side B.

Mavis has always been a talented singer.  She's always been an expressive one.  But a singer needs solid songs.  On WE GET BY, the amazing Ben Harper has provided her with eleven solid songs and she takes them and delivers.


Meanwhile, there is the Middle Kids. This is an alternative band out of Australia and the primary members are Hannah Joy, Tim Fitz and Harry Day.  Day is the drummer.  Hannah and Tim are a couple

NEW SONGS FOR OLD PROBLEMS is the new album and it's an EP (extended play), six tracks.

Friday night
Drank a Cab Sav
At your stupid party
No-one danced
T-shirts
Obsolete DVDs
All these novels
I bet you'll never read
Seemed fine
All this time, we believed we were living
Joy rides, splitting sides, getting thinner
We were so tired, baby we got salt eyes
Swallowed hard
Squeezed tight
I lost my car keys
Overnight
Almost did
Chickened out
Everything between us
Is different now


"At your stupid party, no one danced."  Hannah Joy sings with just the sort of detached cool that it should call to mind Debbie Harry (Blondie) on songs like "Rip Her To Shreds."  But, for me, what NEW SONGS FOR OLD PROBLEMS really does is draw a line from The Motels through Concrete Blonde all the way to the Middle Kids.


They're on tour in the US currently (DC tonight and tomorrow, Brooklyn Thursday and Friday, Raleigh on the 10th, Atlanta on the 11th, San Antonio on the 13th, Dallas on the 14th,  Austin on the 15th . . .)  You should catch them live if they're in your area.  All six tracks are alt-rock perfection but I really think "Call Me Snowflake" is the one that will grab the most ears.


If the music speaks to you, please seek out Middle Kids -- live and on their new album NEW SONGS FOR OLD PROBLEMS.