Kat's Korner: Give Judy her due

Kat: Saturday, I saw an interesting article about Judy Garland at BILLBOARD by Rob LeDonne.  It opened:


Under the bright New York City summer sun and among the abundant flowers at the Flatiron rooftop eatery Serra by Bierra, Lorna Luft is nursing an iced tea and talking about the legacy of her famous mother. “She really championed everybody,” she says of Judy Garland in between sips. “She championed the message of decency and hope. I mean, she recorded ‘Somewhere Over the Rainbow,’ the song of the century about hope that’s become an anthem for so many people.”
It was exactly 50 years ago this past June 22 when Garland, just 47, died in London and sent a shockwave through global culture. She was a pillar of entertainment since her teenage years as a star of films and musicals (among them, of course, the iconic The Wizard of Oz and A Star is Born), and in her later years was regarded as the consummate performer of her generation (she was the first woman to win the album of the year Grammy for Judy at Carnegie Hall, a performance widely regarded as one of the most iconic in show business history). Then, a mere week after Garland’s untimely death, a community she’d been irrevocably linked to experienced their own shockwave.
It was only a mile from where Luft speaks to Billboard in Manhattan where the Stonewall Uprising occurred on June 28, 1969, serving as a flashpoint in the fight for LGBTQ rights that arguably kicked off the modern movement and changed the face of the community forever. “I’ve seen so much chatter on social media and in news articles talking about Stonewall, and often they dismiss the Judy Garland connection,” says John Fricke, an expert on Garland’s legend and author of multiple books on her (including 2011’s Judy: A Legendary Film Career) as well as the Oz film itself. “What that proves to me is that they know a lot about sociology, but they don’t know a damn thing about Judy Garland’s audiences.”

Like many, I know "Over The Rainbow" and "The Man That Got Away" -- classic songs Judy introduced in films.  I know all of her films, having watched them over and over since I was a child.  As someone who loves Gene Kelly, my favorites (after THE WIZARD OF OZ) were the three films she made with Gene: SUMMERSTOCK (featuring the iconic "Get Happy"), FOR ME AND MY GAL and THE PIRATE.  I also loved her in the drama THE CLOCK and the musicals MEET ME IN ST. LOUIS (featuring the classic "Have Yourself A Merry Little Christmas" as well as "The Trolley Song"), THE HARVEY GIRLS (featuring "On the Atchison, Topeka and the Santa Fe"), EASTER PARADE (featuring "We're A Couple Of Swells"), IN THE GOOD OLD SUMMERTIME, her eight films with Mickey Rooney and so many others.

Judy was an incredible (and Academy Award nominated) actress.  If you knew her films, you knew she could sing.  Judy was one of the greatest singers of the 20th century, in fact. 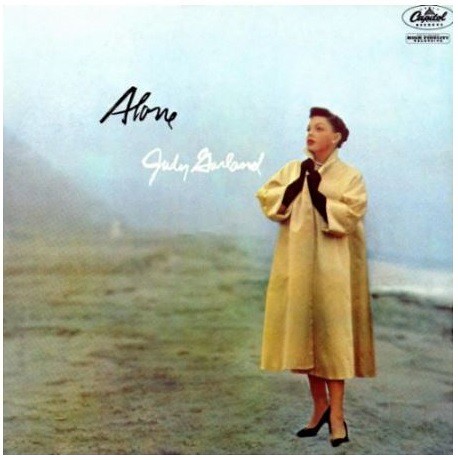 Recently, I've fallen in love with her album ALONE and, in the process, discovered two shocking things.

First off, Judy's album career?  It really only begins in the fifties and is really only six studio albums (I don't count THE GARLAND TOUCH since that's an assembly of previously recorded songs put together to make an album as opposed to Judy going into the studio to record an album.)

How could one of the greatest singers only have six studio albums?

Well, the soundtrack singing were released on soundtracks, not Judy studio albums.

The small output shocked me but when I went looking online for reviews of the May 1957 album ALONE, I was shocked to find that Judy's studio albums -- few though they may be -- were almost nonexistent online in terms of reviews.  I found a half-assed 'review' at ALL MUSIC (which gave the album only three stars, by the way).  At THE JUDY ROOM, I found a solid summary of the album:


Orchestrated and conducted by Gordon Jenkins, "Alone" was Judy's first and best "conceptual" album. All of the songs reflect the album's title of being "alone". As does the artwork.
This album is quite a departure for Judy, who shows her versatility as a vocalist by performing very bluesy and jazz infused numbers. If you ever want to show people that Judy Garland sang more than just "show tunes", this is the album to play.


"I'll go," Judy sings three times before adding "my way by myself."  That's how she kicks off the track "By Myself" as well as the album. And the drums are amazing, by the way.  And while I'm "by-ing the way," am I the only one who listens to the arrangement (not the melody) and hears echoes of Barbra Streisand's later "Gotta' Move"?


Ten tracks will follow (I'm working from the original vinyl release -- there are eleven tracks on some editions).  Each will be a standout vocally.  Her brava on "Me And My Shadow," her delicate touch on "Among My Souvenirs."  But they will also be a standout in terms of arrangements.  Gordon Jenkins highlights Judy's voice.  The music does not belabor the melody or a countermelody.  Judy's voice carries the melody and Gordon uses the arrangements to set off the mood.

I love everything about the album.  I have listened to it repeatedly since picking it up.  In fact, my regret about vinyl is that I have to flip it over as opposed to sitting my lazy butt down and listening to all ten tracks in a row.  (I've ordered the album on CD from AMAZON.)

I don't know how to praise this album because you can only use "amazing" so many times but that would be the one word review for ALONE.  Before I picked up this album, I knew Judy was one of our premiere vocalists, one of the ten best of the 20th century but, even knowing that, I was blown away by ALONE.  Strongly recommended and this is a five star album -- don't believe the fool at ALL MUSIC.