Kat: Drake's released another piece of crap album.  Why?

In ten years, no one will be listening to him.  Pioneers of the field, whether it's Jay-Z, Public Enemy, Wu Tang Clan or whomever, wrote songs/raps about things that mattered.  Even Eminem can point to a song here or there about his daughter.

Drak writes like a gay man desperately in the closet using every bit of strength he has to convince you that he's not gay.  After awhile, you just want to pat him on the shoulder and tell him it's okay and he doesn't have to hide anymore.

"Trust Issues" suggest he might be able to have a singing career -- with strong material because that voice is not going to sell it. 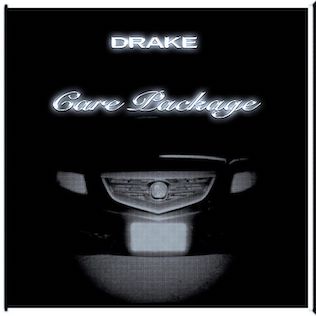 CARE PACKAGE, his latest release, really questions how he's going to sell it.

For whatever reason -- maybe the fact that so much of the rap audience is made  up of spoiled, White suburban kids -- Canadian born and raised Drake who came to fame via DEGRASSI HIGH has been able to pretend he's a tough thug for several years now.

He's just a giddy teen girl off to the mall, if we're really honest.  His 'songs' and 'raps' could be tracks for the rom-com CONFESSIONS OF A SHOPAHOLIC.

Some 'bitch' is always doing him wrong and he gives you a line -- two at most -- about that and then goes back to talking about what he bought.  He's Tiffany in the eighties.

From KIDS IN THE HALL?

In fairness, Tammy's rap skills are a little stronger than Drake's; however, the two do come off like the stereotype of a Jewish princess.  For Drake, he gets that from his mother's side of the family.  For Tammy, I have no idea.

James Bay.  Possibly a gifted singer but shouldn't a gifted singer know the material.  I ask that because the Grammy nominated artist has just released a track exclusive to AMAZON.  It's a Carole King cover.  So that should be good, right?

It's "Will You Love Me Tomorrow?" -- the old sixties hit Carole and her then-writing partner and then-husband Gerry Goffin wrote for the Shirelles who'd already announced "Tonight's The Night" -- meaning the deed would be done.  Sex.  Now the question, as the moment approached, was would this guy still love the gal after she put out?  It became the group's biggest hit.

Later on, it was recorded by many other artists -- Carole on her TAPESTRY album, Roberta Flack, Laura Branigan, Cher, Linda Ronstadt, Jackie DeShannon, Melanie and many others -- Joni Mitchell even quotes from the song in her classic "Chinese Cafe."  And along the way it's had "still" added to it, "Will You Still Love Me Tomorrow?"

It's a question that many women over the years have asked in their own lives.  Which doesn't mean men haven't recorded it -- Andy Gibb infamously recorded it.  It's not one of his better tracks.

How could it be?

It's not how we see men.  You're about to plunge your cock inside us and you're worrying that we may not love you tomorrow?  That's really not been the male experience -- not even in the field of Emo.  So James Bay hits some wonderful notes in the song, gets the lyrics right but still leaves you confounded with why he's recorded it in the first place?

Who is really going to relate to his version of the song?

And who's going to relate to Drake?  This album is just Drake's latest attempt to cash in by compiling tracks he's done over the last nine or so years that never ended up on albums proper.  Tracks, not songs.  There's nothing here that will stand the test of time.

Drake's too shallow and, honestly, too ignorant.

Having lived on a diet of reality TV, he's left with the false impression that Calabasas is the height of sophistication and wealth -- it's not.  Hint to Drake, actual wealthy spots don't let you tape reality shows there.  They're too classy for that crass and vulgar genre.  Drake misses so much which leads to many comical portrayals -- sadly, though, the laughs he provides are all unintended.

For example, "My summer diet is just Rose and calamari," he declares at one point, sounding like he's getting ready to put on an apron and join Ina Garten in the kitchen.

Some are saying that CARE PACKAGE is nothing but an attempt by Drake to cash in.  If so, I say: Good.  He needs to cash in now while he can make some money.  He's done nothing that will last.  His tracks do not remind you of your life or speak to your experiences and perhaps it's that high, soft voice -- so free of bass -- that makes his boasts sound even more ridiculous.  If he can make money off this poorly mixed collection of leftovers, more power to him.  Nas will be remembered and celebrated for years, Drake is Fabian -- a boy of the moment, one soon to be quickly forgotten.  As Janis once advised, "Get it while you can.  Get. It. While. You. Can."