Monday, November 25, 2019.  Protests continue in Iraq amid rumors of a coup while, in the US, Joe Biden's campaign continues to struggle.


Starting in the United States where the race for the Democratic Party's presidential nomination continues.  Nate Poole (MAINE CAMPUS) observes:

The fifth installment of the Democratic debate series took place on Wednesday, Nov. 2, in Atlanta, and Joe Biden was recorded on stage with his foot more firmly secured in his mouth than Americans have yet seen this election cycle. As disheartening as it is to admit it, image is vital in politics, and Biden appears to be hell-bent on constructing himself as befuddled and out of touch with his own party. The most recent debate seemed to make one thing very clear; Biden is not sharp enough to compete on the debate stage. The fact of the matter is that the former vice president may simply be too old to keep up.
Throughout the majority of the previous debates, Biden has been the preferred target of nearly all the other candidates as he has been leading in many polls since launching his campaign. One might think that two previous runs at the presidency in 1988 and 2008, along with decades of experience in politics, might have prepared Biden for these attacks, but unfortunately, his greatest challenge on the debate stage is himself. Biden’s first major stumble occurred when he was discussing how to prevent sexual assault and violence against women from happening on college campuses by repeating “we’re gonna keep punching at it,” resulting in audible scoffs from the audience.


Joe was the press favorite.  They excused him, they ignored and minimized his mistakes.  They thought they could carry him over the finish line.  That was then.  Carl Golden (THE TRIBUNE DEMOCRAT) notes how Joe's abilities are being questioned:


The establishment nervousness is two-fold:
• Despite his lead, Biden is in danger of losing the nomination to either Sen. Elizabeth Warren of Massachusetts or Sen. Bernie Sanders of Vermont, both of whom share far left fringe positions which will doom their chances of defeating President Donald Trump.
• Even if Biden secures the nomination, his campaign has been marked by gaffes and stumbles, raising serious doubts about his ability to compete with Trump. Lurking in the background is the alleged conflict of interest posed by his son’s accepting a $50,000 per month position on the board of directors of Burisma, a Ukraine energy company, while his father served in the White House.

As former Vice President and current Presidential candidate Joe Biden left his car in the pouring rain to enter the East Side Providence home of Sally Lapides and Arthur Solomon for an exclusive fundraiser, he was approached by climate activist Michael Kearney. At first Biden seemed to welcome Kearney, but when Kearney, a 22 year old Providence resident, brought up the subject of climate change, Biden brushed him off.
“Why are you putting the fossil fuel industry over us?” yelled Kearney, as Biden left reporters and protesters alike outside in the rain. “You said you wouldn’t take Super PAC money and now you take Super PAC money!”
“I’m really scared for my family who’re in California and suffering the worst effects of wild fires,” said Kearney to reporters. “Every day I am afraid for their lives and their homes. I’m scared for those of us in Rhode Island, because we’re facing the worsening effects of more severe weather events.


People across the country have been sharing the video of your action last night. Can you explain why you decided to challenge Joe Biden?
CR
There’s a presidential election unfolding right now where immigration has received a lot of attention.
And the immigration crisis is felt deeply by many people, not only immigrants. We’ve seen record numbers of allies mobilize to express their outrage about children in cages, family separation, and deaths at the border. Hundreds of thousands took to the streets when Trump declared his “zero tolerance” policy.
But sometimes it feels like the American public thinks Trump started this crisis. So we wanted to take this opportunity to remind voters that even under the Obama administration — with Biden as VP — we had a daily immigration crisis, with an average of over a thousand deportations every single day, 3 million in total.
And yesterday was not first time Biden has been asked about this. It’s really concerning to me that Biden continues to embrace Obama as someone who was supposedly a friend of immigrants. I’m terrified when I hear presidential candidates talk only about rolling back Trump’s policies. Just going back to the Obama status quo is completely unacceptable; it would be a betrayal of the immigrant community.

EB
One of the things Silvia Morreno told Biden was that, given Obama’s broken promises, “it is hard for me to trust you.” Can you speak more about this distrust?


CR
Yes, as I mentioned last night, I had been a volunteer for Obama in 2008. I remember hearing Obama sit down with Jorge Ramos from Univision and promise to legalize the undocumented. And I bought into that — it gave me hope. I believed. A lot of people did.
You know, Obama in 2008, and 2012, depended on immigrant voters — Latino, Asian, African — to win. We carried him to victory in states like Florida, Wisconsin, and Michigan. And one of the reasons we did that is because he promised to pass immigration reform.
But the rest is history; Obama didn’t meet his promises. Not only did he never prioritize immigration, he ended up deporting 3 million of the same people he had promised to help.
We’ve been down this road before. We’re used to presidential candidates adopting positive rhetoric on immigration only when it’s convenient for them. We’ve experienced broken promises leading to family separations. That’s why we’re really focused on this demand that all presidential candidates pledge on day one of taking office to pass a moratorium on deportations through executive order.
Given the magnitude of the crisis, this is the minimum. The mistrust is deep; many immigrants right now are skeptical that either party could be a vehicle for change. Clearly Trump is terrible and he has scapegoated us, but the Obama legacy is still strong. It was not long ago; immigrants remember what happened. So supporting an immediate moratorium on deportations is a critical litmus test — it will take that level of commitment to even begin to restore trust.
We know that Congress is the only body that can pass full legalization, but it would leave candidates off the hook if we only called for a pathway to citizenship. We can’t rely only on Congress. Presidents have executive power to protect immigrants — and they need to use it.

Joe Biden is a nightmare who voted for the Iraq War.  The destruction in Iraq continues.  Brian Bienkowski (ENVIRONMENTAL HEALTH NEWS) reports:

Iraqi children living near a U.S. army base have elevated levels of dangerous metals in their bodies and are more likely to suffer from birth defects, according to a new study.
These disorders at birth can be severe and debilitating — including deformed limbs, congenital heart defects, and brain defects such as spina bifida.
The study, though small, adds to growing evidence that toxics from war — dispensed bombs, bullets, detonation of chemical and conventional weapons, and burn-pit emissions—pollute the environment and local people long after the battles are over, leaving a toxic legacy from U.S. occupation.
"The past decade of war in the Middle East evinces that overwhelming amounts of toxic metals have been injected into the Iraqi environment through thousands of bombings and millions of expended bullets," the authors wrote in the study published today in Environmental Pollution.
The researchers went to Bint Al-Huda Maternal and Child Teaching Hospital in the Nasiriyah region of Iraq and examined 19 children lived near a U.S. Army Base— Tallil Air Base—and 10 children who lived away from the base, comparing the kids' contaminant levels and health problems. The U.S. targeted Nasiriyah both in the early 1990s and 2003, and, according to the Department of Defense, open air burn pits have been used at Tallil Air Base starting in 2003.
"The U.S. maintains stockpiles of radioactive material at bases, and also stockpiles ammunition that has these things in it," lead author, Mozhgan Savabieasfahani, an independent environmental toxicologist based in Ann Arbor, Michigan, told EHN.
They found that the most severe birth defects and the highest levels of thorium—a radioactive byproduct of depleted uranium—were found in children living closest to the United States' Tallil Air Base.

A total of 11 protesters have been killed and 289 others injured from Nov. 21 to 24 in the protests in Iraq http://xhne.ws/nREQa 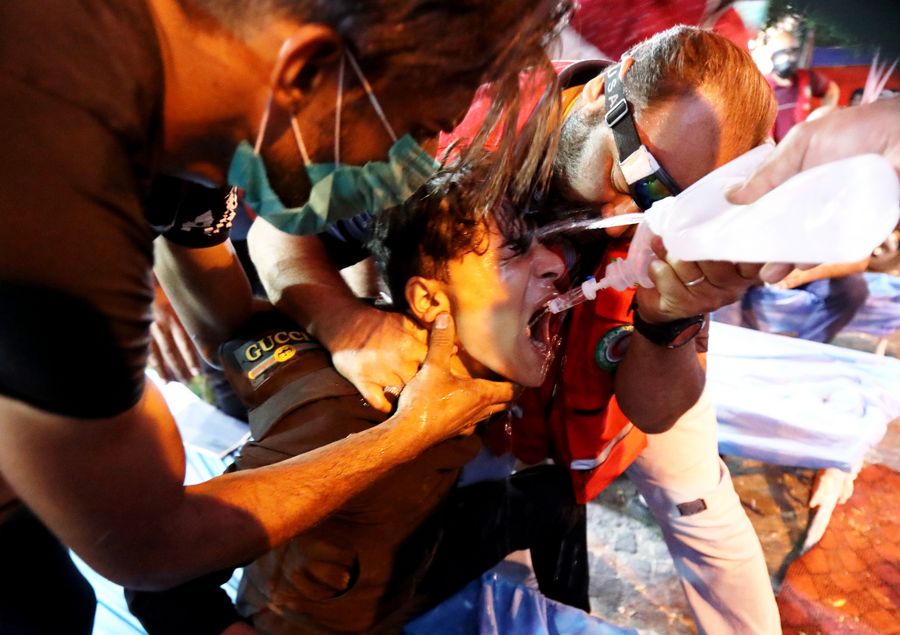 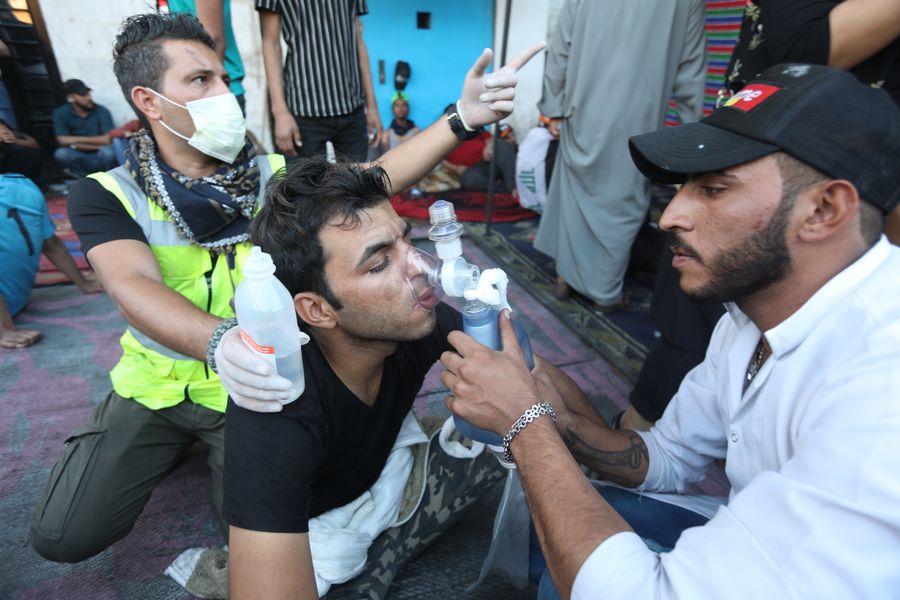 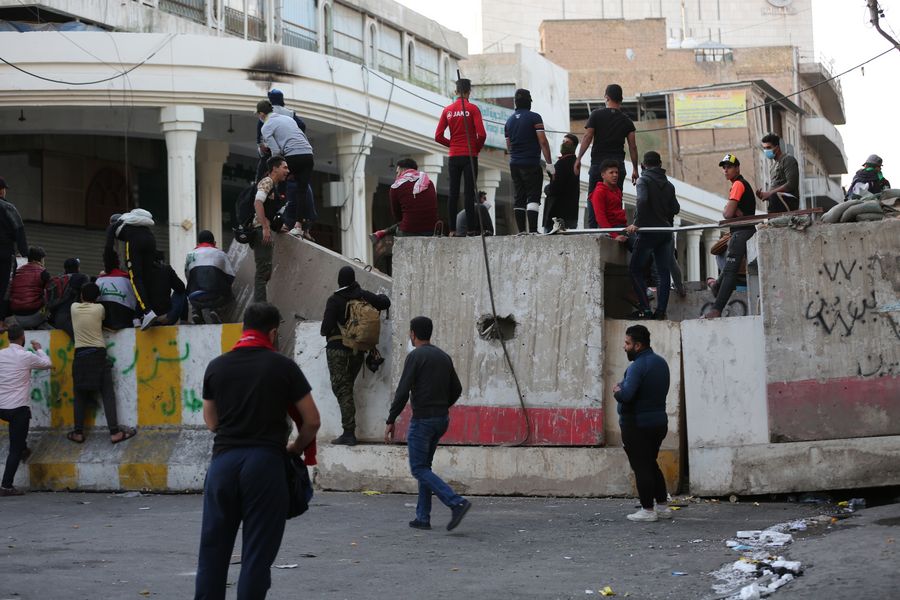 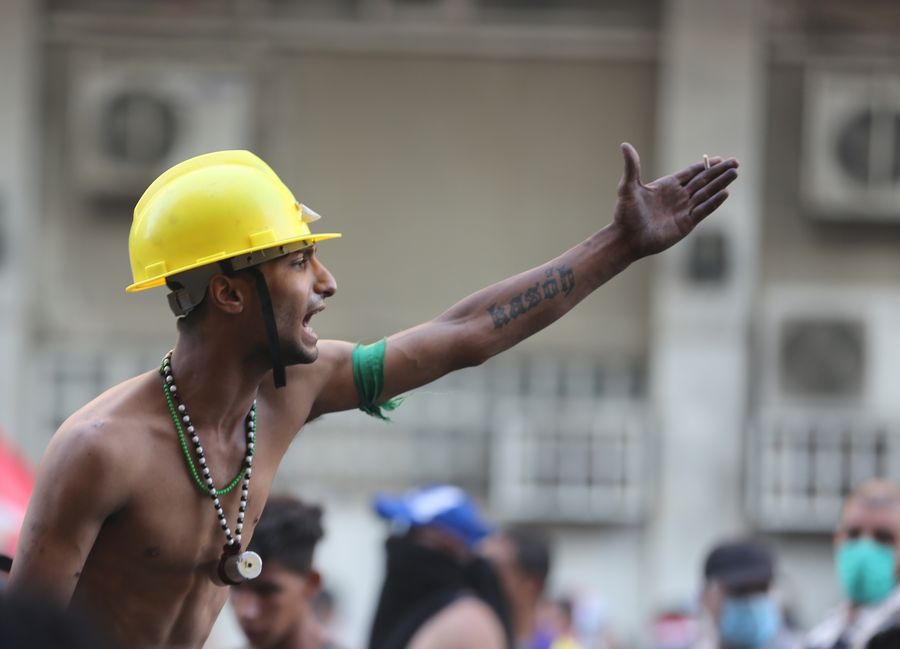 At least 13 anti-government protesters were killed Sunday by Iraqi security forces in one of the “worst” days of violence in the country's south amid widespread ongoing demonstrations against corruption, officials said.
Since the anti-government protests broke out in early October, at least 342 people have been killed and thousands more wounded in Baghdad and various southern provinces.
Demonstrators have taken to the streets by the tens of thousands over what they’ve called widespread corruption, a lack of job opportunities and poor basic services, despite the country’s oil wealth.

REUTERS notes, "A Reuters tally of the dead as given by security and medical sources shows at least 339 people have been killed."  DEUTSCHE WELLE explains, "Despite Iraq's possessing one of the world's largest oil reserves, many Iraqis live in poverty, without adequate access to education, health care and well-paid jobs. The country is the 12th most corrupt in the world, according to Transparency International."