Wednesday, December 4, 2019.  Oh, look, they've pulled their favorite board game off the shelf yet again.

Starting in the US where the race for the Democratic Party's presidential nomination continues.  And maybe it's time for some people to take a good hard look at themselves.  I'm not talking about the candidates right now, I'm talking about people covering the race.

Maybe if your name is Michael Tracey, and Margaret Kimberley has already called you out for your limited vision on race, maybe then you take a look at yourself before going to town on Kamala Harris?

Senator Kamala Harris dropped out of the race yesterday.  There's a sort of glee over this among sexists -- that does include you, Michael, and don't pretend you can hide behind Tulsi -- and it's interesting because she dropped out yesterday and Steve Bullock dropped out Monday.  But his announcement hasn't been the source of mirth and glee that Kamala's announcement has been greeted with.

And you can see the Michael Traceys pile on.  They try to drag in their token (Tulsi Gabbard) and they even lie for Tulsi, but they've been lying for Tulsi forever.  Michael beating off to the thought that Tulsi vanquished Kamala in the second debate -- he needs that girl on girl action.  That didn't happen.  And if you're going to go back to that debate you better get honest that Tulsi chose to go after Kamala who was not the front runner.  She took a pass on War Hawk Joe.  Even after Jake Tapper came back with a second chance for Tulsi to speak on Iraq.  Tulsi took a pass.  This is supposed to be her signature issue.  Joe Biden was the only one on stage who voted for the Iraq War.   He oversaw it for eight years as Vice President.  He overturned the 2010 election and stripped the Iraqi people of their voice via The Erbil Agreement.  There are so many things that he did and the big anti-war candidate Tulsi took a pass on him.  Big brave Tulsi didn't say boo.

Instead, she went after a second tier candidate and the Michael Traceys jizzed in their pants.

Michael knows nothing about race but he wants to tell you that being from Berkeley and this or that is what hurt Kamala with African-American voters (presumably in South Carolina).  And how she thought she could be "Black" like Barack.

First off, Michael, Kamala and Barack are actually bi-racial.  Second, Kamala has a mother who practices what religion?  It's not Christianity.  It's Hindu.

That's what Tulsi practices.  It's what some have used to stigmatize Tulsi as The Other so Michael should be aware of that prejudice.  Kamala could more easily be made The Other.  That really didn't take place with Barack.  Joe Biden's racist remarks about Barack represented the way Barack was seen by the establishment.  A woman -- whether it's Tulsi or Kamala -- was never going to have it as easy as Barack did.

And Michael's feeding into that now with all his non-stop attacks on Kamala.

I wasn't going to vote for Kamala.  I was clear about that here.  I noted that a friend, Willie Brown, stated I was way too hard on Kamala.  But she was never the worst one on the stage by any measurement.

In terms of direct threat to human life, for example, the most dangerous one has been -- and remains -- Joe Biden.  His record is shameful and blood soaked.  Again, Tulsi was given two chances to go after him -- and he was the front runner -- in the July debate and she took a pass.  She also spent her days after -- the media loves a cat fight -- defending Joe and, honestly, lying for Joe.  That's why I have no respect for Tulsi.

I knew she was a fake when I laid eyes on her.  Another Dennis Kucinich who would inspire a tiny number of people only to betray them over and over.  That's Tulsi.

Kamala has her own faults.

But the glee that has gone on in the last 24 hours is something people need to look at.  She was another centrist, corporatist Democrat.  I don't really get the obsessive glee.  And a lot of people have dropped out of this ongoing race without any of this glee.

If Joe dropped out tomorrow?  You'd see huge glee here.  Because our focus is Iraq and Joe Biden supported the Iraq War, cheerleaded it, demonized those opposed to it, repeatedly tried to split Iraq into three regions with no concern or care over what Iraqis felt about that, in 2010 when Iraqis voted for national unity (that's what Iraqiya represented) we saw Joe lead the effort to overturn that election . . . I could go and on.  And let's not forget that in overturning the election, he was giving his support to thug Nouri al-Maliki who Joe noted was not a real ruler (or a decent person) in an April 2008 Senate hearing on Iraq.  But two years later, he was backing Nouri.  Nouri, of course, birthed ISIS in Iraq with his targeting of the Sunni population.

That's a lot Joe has to answer for.

So we would be gleeful.

I'm not getting Kamala's long history here where people around the world have suffered.

She was a prosecutor and that wasn't helpful to her campaign.  (Barack was not, as Michael claims, a Civil Rights attorney.)

As a candidate, she had some strong moments.  Maybe she'll run again?  If she does, maybe she'll spend the time between now and then learning a little more about the groups who felt misrepresented by her.

Her departure does not immediately improve the race.

Let's do The Hideous Ranking for those left seeking the nomination.

1) Joe Biden.  Clearly Joe Biden.  Blood on his hands due to Iraq alone.  Attacked Anita Hill behind her back and failed to stand up for her publicly.  The list of his wrongful actions is lenghty.

2) Mike Bloomberg.  An enemy to people of color, a free press and pretty much anything that we supposedly value in this country.

4) Tiny Pete.  It's takes a big ego to think you should be President of the United States before you are even forty.  He'll be 38 when the 2020 election takes place.  Tiny Pete has no real accomplishments.  But he feels that entitles him to be president, apparently.  A huge ego, a tiny record -- it's a template for massive conflict.

5) Amy Klobuchar.  There's no GOP talking point she won't run with.  There's no one on a stage she won't attack.  Like Joe Biden, she longs for a day in the past when you could speak about the environment but never actually do anything to stop climate change.


Let's close this discussion with numbers.

That's the number of Tweets Michael Tracey has done about Kamala Harris since the news broke that she was dropping out of the race.

That's the number of Tweets Michael Tracey did about Steve Bullock since the news broke that he was dropping out of the race.

For some of the left, though not all, that's at the root of their pursuit of Couric. It's the gift of impunity that allows them to operate in a fact-free environment as they compose the charges against Couric. But those who hear such a statement and nod agreeably are also engaged in the national pastime of bash-the-bitch.
Bash the bitch is as American as apple pie and rush to judgement, so who are we to complain? If it makes us "America haters" to say "Just a minute now" then so be it. Let all the ones partaking in bash-the-bitch wrap themselves in Old Glory, we'll call it the way we see it.
Here's what we see. A woman's trashed. For what she did?
Oh cookie, please, it's for being a woman. Read the commentaries. "Cheerleader" is a trumped up charge -- as usual, the true crime is gender.


Michael Tracey and a lot of others need to look at their actions in the last 24 hours.  There's a lot of latent sexism bubbling up.

Former Vice President Joe Biden on Monday said he didn’t need Barack Obama’s endorsement in the Democratic primary, even if the field were down to three people.


He also scoffed at the notion that Sen. Elizabeth Warren is building enthusiasm and accused Mayor Pete Buttigieg of stealing his plans.


Joe's campaign theme should be "Floundering."  And you know it's bad when the spouse gets involved.  Someone needs to buy a clue, if you're well liked because you're seen as non-political and you're the spouse, stay that way.  You will see your likeables droop and drop if you don't.


Branko Marcetic (IN THESE TIMES) explains:

By the close of the 1970s, Biden began calling himself a fiscal conservative and introduced what he called his “spending control legislation”: a bill requiring all federal programs to be reauthorized every four years or automatically expire. He also voted for a large but unsuccessful tax cut introduced by Sen. William Roth, his Republican counterpart.
Ronald Reagan took office in 1981, pioneering the economic program of generosity to the rich and stinginess to the poor that became known as Reaganomics. Biden was right there with him.
Biden, Reagan and other conservatives pushed the flawed idea that the government is like a household and must take drastic measures to pay off debt to stay solvent. Six months into Reagan’s first term, Biden called the reduction of deficit spending “the single most important” path toward “an economically sound future.”

To curtail government spending, Reagan severely scaled back or eliminated federal programs—even as he slashed tax rates for the rich. Biden voted for both (including an updated version of Roth’s failed tax cut). When the president proposed a budget freeze in 1983—to cut the enormous deficits that, ironically, his tax cut helped produce—Biden one-upped him, working with two Republican senators to propose an even more aggressive budget freeze doing away with scheduled cost-of-living increases for Medicare and Social Security. 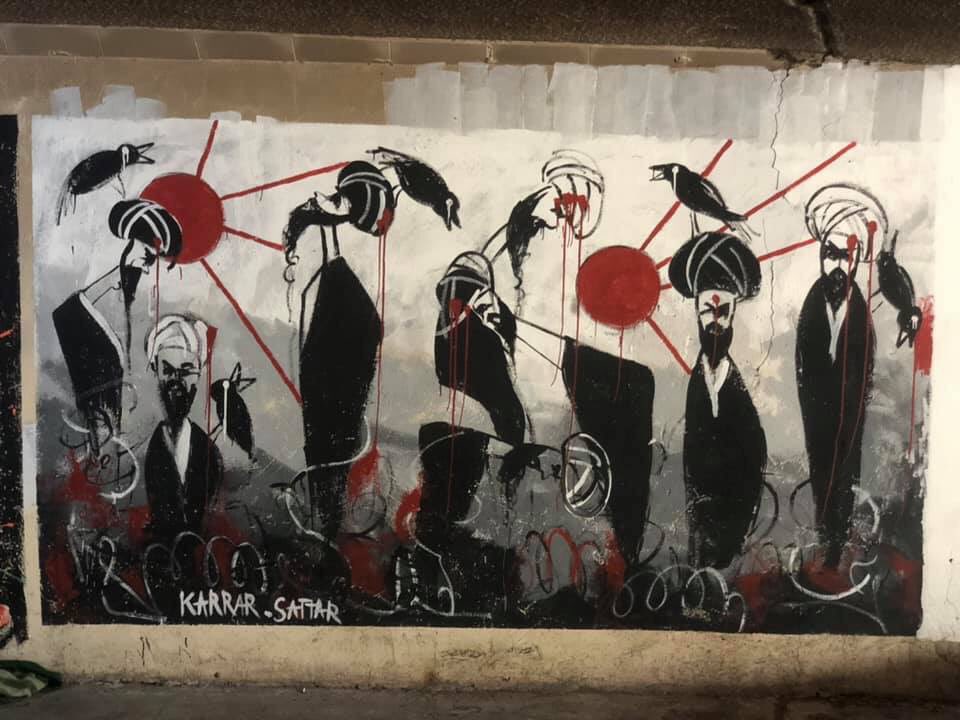 In Iraq, the protests continue.

Senseless that hundreds of young people have been killed in protests calling for reforms in Iraq. The ruling elite do not realise that either they initiate change or change will be forced upon them. Fear is no longer effective and events since 1 October prove that 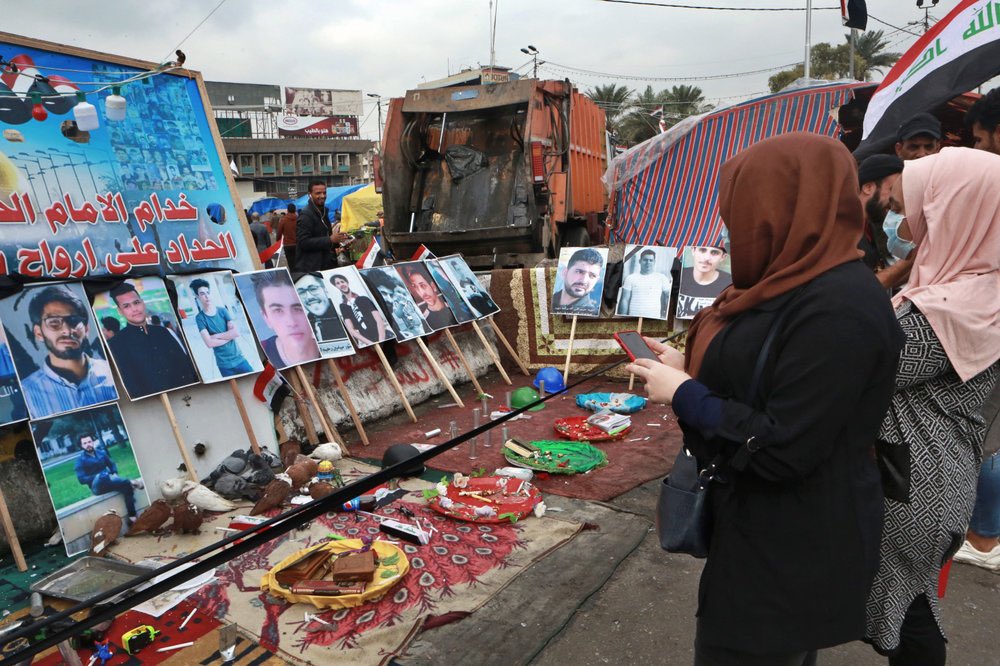 
Again, the protests continue in Iraq.  But the press allows Joe Biden to ignore that topic.  He can talk about his leg hair (and does), bouncing children on his lap, anything at all except Iraq, right?  Oh, he won't talk about his dead beat dad son Hunter Biden who -- even after DNA tests -- is still tangling up the court system instead of meeting his parental responsibilities.  Hey, I guess that's "as a Biden" too, right?