Friday, February 28, 2020.  The corporate press is not a truth telling press (no wonder they refuse to support Julian Assange).

In the United States, the race for the Democratic Party's presidential nomination continues.  FAIR's Jim Naureckas observes at IN THESE TIMES:

Remember when the big winner of New Hampshire was third-place finisher Amy Klobuchar?
“Bernie Sanders may have come first in New Hampshire, but Amy Klobuchar won,” Bloomberg declared (the media company, not the billionaire candidate who owns it). “I would almost argue that a third-place finish for Amy would be stronger and more important than a first-place finish for Bernie,” MSNBC commentator Adrienne Elrod asserted.
That’s not how it worked out, of course; since February 14, Bernie Sanders has gone from a 4-point lead to a 12-point lead over his closest rival, Joe Biden, in national polling averages, while Klobuchar remains in fifth place. In the Nevada caucuses held February 22, Sanders got twice as many final votes as No. 2 Biden, whom Sanders was trailing in the polls as recently as ten days earlier.

Caucus entrance polls found the Vermont senator was the top choice of both men and women, whites and Latinos (though not African-Americans, where he was second to Biden), all age groups except those 65 and older, Democrats and independents, union households and non-union households, and those with and without college degrees. He had the most support among those described as “very liberal” and “somewhat liberal,” and tied Biden among those labeled “moderate or conservative.”
o while there’s still some coverage that might be said to be stuck in the denial stage about Sanders—“Nevada Caucuses Win Would Make Bernie Sanders a Weak Front-Runner” was a late entry in that genre—for the most part corporate media have moved on to the next stage of grieving, which is anger.
MSNBC’s Chris Mattews notoriously compared Sanders’ victory in Nevada to the Nazi invasion of France:


I was reading last night about the fall of France in the summer of 1940. And the general, Reynaud, calls up Churchill and says, “It’s over.” And Churchill says, “How can that be? You’ve got the greatest army in Europe. How can it be over?” He said, “It’s over.”

(Sanders communication director Mike Casca responded: “Never thought part of my job would be pleading with a national news network to stop likening the campaign of a Jewish presidential candidate whose family was wiped out by the Nazis to the Third Reich. But here we are.”)
Former Bill Clinton advisor James Carville on MSNBC mocked the idea of winning elections by increasing voter turnout:


The entire theory that by expanding the electorate, increasing turnout, you can win an election is the equivalent of climate denier…. People say that, they’re as stupid to a political scientist as a climate denier is to an atmospheric scientist.

An actual political scientist might point out that turnout has varied over the last five presidential elections from a low of 50.3% in 2000 to a high of 58.2% in 2008—a difference of some 25 million votes, far more than the popular vote margin even in a relative landslide like 2008. Still, Deadline: White House host Nicolle Wallace was impressed: “You’re describing what sounds a lot like political suicide,” she replied. “I think we need a psychologist to understand that.”


Corporate media has made clear -- repeatedly -- their preference for anyone but Bernie Sanders.  Having made that clear over and over, who can ever again see them as fair, objective or trust worthy?  They are pitching a fit daily over the fact that a large number of people like Bernie Sanders and want him to be the president.  They have actively worked for months to derail Bernie's candidacy and this needs to be noted, this needs to be registered and the notion that they are there to deliver news needs to be forgotten.  They want to manipulate and they want to control.  It's out in the open.


They use anything they can to attack Bernie.  Meanwhile Joe Biden raised a Deadbeat Dad and that's not an issue anyone ever raises in a debate.


Hunter Biden left his wife and three kids to go shack up with his brother's widow.  Even then, he couldn't keep it in his pants and got another woman pregnant.  He spent over a year insisting the child wasn't hit, insisting he never had sex with the woman.  Lying.  As DNA demonstrated.  And now he refuses to supply the court with the documents they need in order to set the amount of child support he owes each month.  He's a Deadbeat Dad.  And Joe's not forced to answer about even though Joe pontificates constantly about families and protecting children and all this other stuff that's meaningless when your own family won't take care of a child.

That's a story, that's a real news story.  Instead of that, we get garbage like this from THE NEW YORK TIMES' Adam Popescu:

Dressed in Oxford boots, jeans and a long sleeve T-shirt, Hunter Biden ushered a reporter down a stone walkway, into a pool house-turned-art studio in the Hollywood Hills.
It was filled with colorful works of decorative abstraction — psychedelic florals and ethereal patterns that look like nature viewed through a microscope, leaning toward the surreal. There were nearly 100 of them, all by his own hand. Some were signed RH Biden, for Robert Hunter Biden, the 50-year-old son of the former vice president.
“What do you see?” he asked, shifting bottles of ink and a bamboo wok brush.
The more critical question might be: How does it look to the outside world?

As an undiscovered artist, he is better situated than most: living in a rented, 2,000-square-foot house in the Hollywood Hills off Mulholland Drive, with a Porsche Panamera in the driveway, plenty of natural light and a pool house he has transformed into an art studio.


From the edge of the sloping property — it was leased for $12,000 a month starting last June 15, according to the homeowner — he has a view onto the San Fernando Valley below: Burbank and Universal Studios to the east, the 405 freeway to the west.
“See that red barn?” He pointed at a farmhouse perched on the next mountain top — it belongs to the artist David Hockney, he said — then focused on four red-tailed hawks rising on pockets of hot air, a technique called thermal soaring. “Look at that,” he said, craning his neck. “I see them every day. I love watching them.”


At the very end of the article, we get this:


This past November, a paternity suit revealed he was the father of a toddler; he had met the child’s mother in Washington. On Wednesday, a judge ordered Mr. Biden to come to Arkansas, where the mother lives, for a March deposition. The mother’s lawyer said that, among other things, he wanted to know whether Mr. Biden was making money from his art.
Mr. Biden’s lawyer said his client could be available in April, but the judge, noting that Mr. Biden reported in court filings that he was unemployed, said, “I haven’t heard any good cause why he cannot make this a priority.”

And that's what THE NEW YORK TIMES pimps.

Right there is all that is wrong with the corporate press, right there.

They run an 'arts' story about a nobody.  He's accomplished nothing in the art world, he's not studied, he's not delivered.  He certainly hasn't suffered.  Real artists who could actually benefit from coverage in the paper are shoved aside so that nepotism can ensure Hunter gets attention.

And because he's the son of a former vice president and former senator, no harsh realities intrude.  It's all rah-rah for the circle jerk.

Front page news should be that he's refusing to turn over financial documents and for over 18 months refused any type of child support (the first payment took place this month but the judge has noted that she can't properly determine how much he should by paying since he won't turn documents over to the court).  He got a woman pregnant and then lied about having sex with her, denied the child and is now on a new marriage where that woman's pregnant (no, not his former sister-in-law).  This is disgusting.  This is beyond Peter Pan syndrome.

He is 50 years old and not providing for his child.

That should not earn you a fawning portrayal in the so-called paper of record.

We're in the days of Let Them Eat Cake.  That's the reality that's coming through loud and clear.

You have a media that refuses to do its job, that wants to be entertained even when it should be outraged.  And the only time they can bother to object is when someone runs a platform that might make the lives of most Americans a little bit better.  That's when they can get outraged.

Hunter is not a young man.  He is 50-years-old.  Middle aged.  Every opportunity he's been provided he has destroyed.

And the arts section wants to treat him like a contender.  He's a piece of human filth.  Only trash spends $12,000 on a rental while refusing to pay child support.

The purpose of such a direct commissioning program is for the US military to bring in specialists needed in times of crisis or emergency, such as doctors, chaplains and lawyers. I knew a couple of direct commission naval officers that were public and media relations people. The direct commissioning program is also a way for the politically well connected to become military officers without enduring the selection and hardship involved in officer training. The most famous of such a political cast is Hunter Biden, who lasted a month as a Navy officer before his drug test results were returned positive for illegal narcotics usage. I knew several direct commission officers who were such dilettantes, men who certainly understood the political prestige and potency of the US military uniform, especially a pretty one, like the Navy’s, but who saw no value in earning their rank.


As a Biden, Hunter makes clear how disgraceful and shameful that family truly is.  50-years-old and Hunter's 'finding himself' while he rents a sports car and rents a mini-mansion and refuses to support his child.  That's the Biden family.

There's nothing else you need to know.  Their only concern throughout this -- and it remains the concern today -- is that they delay Hunter turning over any information until after Super Tuesday.  That's all the Biden family cares about.  That this not impact support for Joe.


This is what outrages the corporate press:

Bernie Sanders‏Verified account @BernieSanders 18h18 hours ago
I stand with the 2,000 nurses at @MissionHealthNC fighting to form a union with @NationalNurses. I say to @HCAhealthcare, one of the most profitable hospital corporations in the country: treat your nurses with respect and dignity, and refrain from union busting.
/>
1:03
74.3K views


Fair wages, respect and dignity.  That's what the corporate press rails against.  Given them a crackhead Deadbeat Dad like Hunter and they love him.  He is part of the circle jerk and will be protected.  He will not be held accountable.  He will not be expected to show the maturity of even a man half his age.  The corporate press exists to defend and advance Hunter Biden.


Joe Biden pisses on the American people so the corporate press protects his son.


Joe fights for corporations, he fights for them to triumph over the American people.  And the corporate press treats his worthless son with kid gloves as a result.

The corporate press is biased and long ago chose sides.  They've made that abundantly clear this election cycle.

In Iraq, the protests continue.

The Baghdad Post‏ @BaghdadPostPlus 16m16 minutes ago
Activist: The parliament, which allegedly represents people, cannot continue to discuss the possibility of granting confidence to the government of a prime minister who is rejected by protesters. #Allawi's government should be abolished #BaghdadPost #IraqProtests 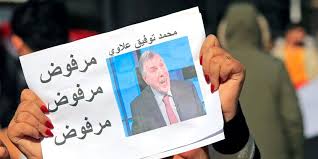