Thursday, July 29, 2021.  As the Iraq War continues, we take a break to note an important passing: an activist, journalist, theorist, fighter, inspiration and a very good person has died.

Glen Ford has passed away.

Journalist Glen Ford was a truth teller.  Many of us first became aware of his work from THE BLACK COMMENTATOR.  Being a truth teller meant that he had to leave TBC.  Tell the truth or just go along?  Tell the truth was Glen's decision.  He, Bruce Dixon and Margaret Kimberley all left TBC and founded BLACK AGENDA REPORT which quickly became the must read website online.  Along with the text reporting, Glen Ford co-hosted BLACK AGENDA RADIO.

I am sorry to inform you that Glen Ford, founder of Black Agenda Report, and my friend, comrade, and mentor has passed away. We will share more information as we receive it. May he rest in power.
@GlenFordBAR
@blkagendareport
9:34 AM · Jul 28, 2021

In replies to her Tweet, many note their surprise and sadness -- including Richard Medhurst, Fiorella Isabel, Kevin Gosztola and Glenn Greenwald.  Libby Liberal notes:

Whenever I attended the Left Forum in NYC, I ran down the list of presentations and marked all the panels containing #GlenFord to attend.
8:40 PM · Jul 28, 2021 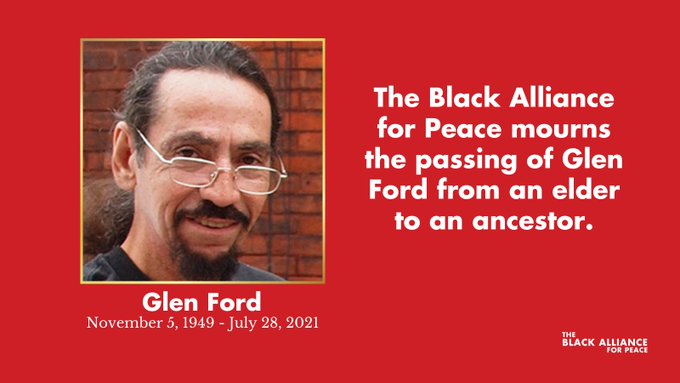 Minister of the Interior Tweets:

For some he was an expert political analyst, journalist, activist, and broadcaster. But he was my hilarious, fun-loving uncle too. Going to especially miss our countless 5-hour-long conversations, which were formative in making me the person (and writer) I am today. RIP Glen Ford 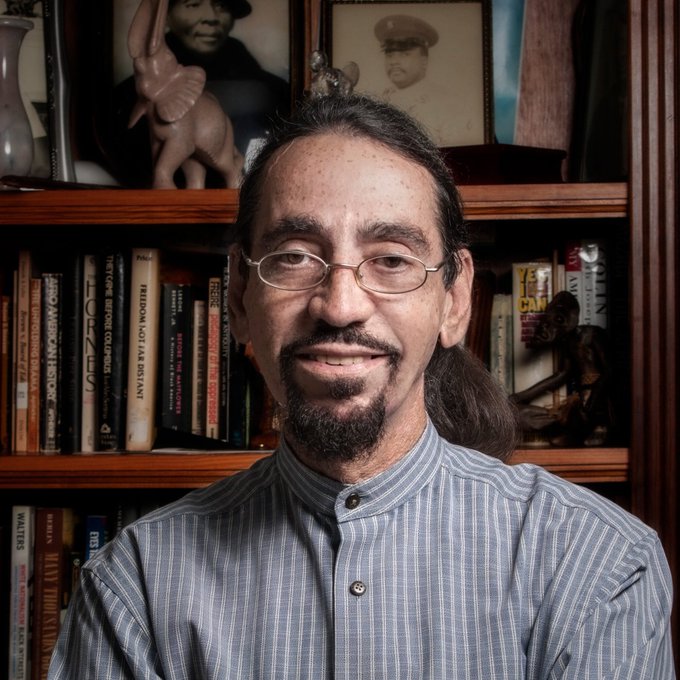 To call Ford a career journalist is a vast understatement. According to his bio on the Black Agenda Report website, Ford was reporting the news live on the radio as early as 11-years-old and went on to enjoy a career in journalism for more than 40 years that included working as a Washington bureau chief as well as a correspondent covering the White House, Capitol Hill and State Department.

After getting his start in news radio in Augusta, Georgia, Ford honed his skills at other local news stations and eventually created the “Black World Report,” a syndicated half-hour weekly news magazine that paved the way for the Black Agenda Report to be founded. Years later, in 1977, Ford helped launch, produce and host “America’s Black Forum,” the first nationally syndicated Black news interview program on commercial television.

That led to the creation of “Black Agenda Reports” two years later in a successful effort to focus his syndicated content in the areas of Black women, business, entertainment, history and sports.

About a decade later, Ford branched out into the then-burgeoning popularity of hip-hop culture with “Rap It Up,” the first syndicated hip-hop music show in American history.

After co-founding BlackCommentator.com in 2002, he and the rest of the website’s staff left to launch Black Agenda Report, which remains a popular source of information, news and analysis from a Black perspective.

In one of his final dispatches before his death, Ford, along with Kimberley, on July 21 addressed the jailing of former South Africa President Jacob Zuma, questioning on Black Agenda Report whether the resulting uprising there should be characterized as “riots” or an “insurrection.”

Born Glen Rutherford in Georgia in 1949, Ford famously has his surname shortened by James Brown, who owned the radio station where Ford got his start in Augusta, Georgia.

Dust James reflects on how Glen changed the conversation.

Below, he's discussing Barack Obama's legacy with Chris Hedges in 2017.

And here is Glen speaking on war, elections and more.

ABF made Black broadcast history. For the next four years, the program generated national and international headlines nearly every week. Never before – and never since – had a Black news entity commanded the weekly attention of the news services (AP, UPI, Reuters, Agence France-Presse – even Tass, the Soviet news agency) and the broadcast networks.

In 1987, Ford launched “Rap It Up,” the first nationally syndicated Hip Hop music show, broadcast on 65 radio stations. During its six years of operations, “Rap It Up” allowed Ford to play an important role in the maturation of a new African American musical genre. He organized three national rap music conventions, and wrote the Hip Hop column for Jack The Rapper’s Black radio trade magazine.

Ford co-founded BlackCommentator.com (BC) in 2002. The weekly journal quickly became the most influential Black political site on the Net. In October, 2006, Ford and the entire writing team left BC to launch BlackAgendaReport.com (BAR).

In addition to his broadcast and Internet experience, Glen Ford was national political columnist for Encore American & Worldwide News magazine; founded The Black Commentator and Africana Policies magazines; authored The Big Lie: An Analysis of U.S. Media Coverage of the Grenada Invasion (IOJ, 1985); voiced over 1000 radio commercials (half of which he also produced) and scores of television commercials; and served as reporter and editor for three newspapers (two daily, one weekly).

Many are noting that video on social media.  It's an example of Glen's truth telling and the priority he put on it.  He was dropped from DEMOCRACY NOW!'s guest list for refusing to sing from Amy Goodman's hymnal.  July 14th, Ava and I were noting in "TV: Truths -- partial and whole:"

Let's start with Aaron Mate. We've been very clear both here and at THE COMMON ILLS that Aaron has our sympathies and that the lies and attacks Ana Kasparian and others at THE POST-MENAPAUSAL TURKS have carried out are unseemly and reflect more on the attackers than they do on Aaron.

We've defended him and will again. But we speak to actual journalists -- not podcasters. And we're aware that they had great sympathy for Aaron. The sympathy has weakened. They're tired of him "making himself the story," exact words from two journalists -- print journalists. They're referring to his constant appearances on various programs including Jimmy Dore's where Aaron talks about . . . well, himself. We're not questioning his right to defend himself but we are noting that when he makes himself the story reporters lose interest. And so do viewers if we can judge by the stats at THE COMMON ILLS where various YOUTUBE videos get reposted and in e-mails to both that site and this one.

We see the point many are making. We have another point though. Glen Ford of BLACK AGENDA REPORT. He told truth when it was uncomfortable and did so on the laughable DEMOCRACY NOW! Amy Goodman was pimping the White House and the administration's talking points. Glen didn't play. The result? Glen got banned from the show. He hasn't been on since 2012.

What else hasn't he been on? Aaron Mate's THE GRAYZONE.

That's an issue to us. And as Aaron speaks of being wronged, while we agree with him, we're aware that others were wronged as well. And if you're not using your power to help others who were wronged it just comes off a little self-focused, a little self-centered -- honestly, a little vain.


for a while i'm speaking
you know how much you hate to be interrupted
maybe spend some time alone
to fill up your proverbial cup
so that it doesn't always have to be about you
-- "Front Row" written by Alanis Morissette, first appears on her SUPPOSED INFATUATION JUNKIE

Aaron is Jewish which is an ethnic minority. It's not really a minority in left media. Glen Ford is African-American. Sabby Sabs and Niko House raised an important issue in the video below last month.


Why aren't people stepping up? Why does Sabby have to make that video in 2021? Shouldn't inclusion -- at this late date -- not require reminders?

All women and men of color are grossly under-represented in our left media.

The news of Glen's passing will hit many hard.  And should, he was an important voice, someone who stood for a better world.  Last night, I learned of Glen's passing when I was in the e-mails and posted BLACK POWER MEDIA's video about it.  And I was sad -- which I still am -- and feeling something a little more than desperation.

Glen's voice was an important voice and we really needed it.  We needed his take on events, we needed his suggestion, we needed his guidance.  The world was a little better off with him in it.

I'm still very sad but I don't feel so desperate.  I've had time to think a little and Glen influenced so many of us -- in this country and around the world.  His actions influenced so many and so much that we may not even notice many of the ripples.  But when Sabby Sabs tells her truth with a risks-be-damned attitude, she's carrying on the work of Glen Ford.

He made his mark and he inspired.  He will be sorely missed and, while he was with us, he used his time in a way that mattered and registered.

Here he is speaking at The People's Tribunal on the Iraq War.