Hundreds of international observers are gearing up for the legislative elections in Iraq on Oct. 10 in an attempt to help Iraqis conduct transparent and fair elections https://al-monitor.com/originals/2021/08/international-observers-prepare-iraqs-elections… by
@SaadoonMustafa

Many obstacles remain to a fair election.  THE NEW ARAB reports:

Facebook is restricting advertisements for Iraqi political parties and candidates in the run-up to the country's parliamentary elections, an official has told The New Arab's Arabic-language sister site.

Iraq's judiciary council requested that Facebook take down posts that relied on "defamation" and "fuelled sectarianism", the official from the Media and Communications Commission, a state agency, told Al-Araby Al-Jadeed.

The United Nations mission in Iraq last week called on Iraqi election stakeholders and the media to avoid misinformation in the run-up to the vote, which takes place on 10 October.

Officials are hoping to avoid a repeat of the 2018 election, which faced widespread accusations of fraud.

2018 is not the election that needs to concern anyone.  2010 is the election that should trouble.  Back then, Joe Biden was the vice president of the United States.  The Iraqi people turned out in March of 2010 to vote.  They got a prime minister in . . . November.  Why the long delay?  Nouri al-Maliki was the incumbent.  They voted him out of office.  He refused to step down.  This brought things to a standstill and was known as the political stalemate.  It lasted for over eight months.  Instead of demanding that the vote be respected, the US government went around the voters.  They negotiated a contract known as The Erbil Agreement.  It overturned the results and gave Nouri al-Maliki a second term.  That's the election that should concern observers today.

But too many avoid the topic.  To this day, 'expert' Patrick Cockburn has never written of The Erbil Agreement -- despite the huge ramifications this had on Iraq which include -- but are not limited to -- the rise of ISIS in Iraq, fostering a mistrust of voting among the Iraqi people . . .

Nor did they express outrage over the person being given that second term -- a person known for torturing and for secret prisons.  Nouri was chosen by Bully Boy Bush originally in 2006 because it was thought that he would be easy to manipulate based upon his CIA assessment which rightly noted that he was extremely paranoid.  (We noted that finding here years before WIKILEAKS published the State Dept cables -- check the archives.)  His paranoia was what made him so dangerous to the Iraqi people but clearly that was never a concern to the US government -- the safety of the Iraqi people.

To this day, the ramifications of the US imposing Nouri for a second term are not dealt with or acknowledged by many.  A sort of xenophobia ('what do those kind of people deserve anyway!') cloaks what took place.  It's also minimized due to the large number of whores who lied.  Quil Lawrence is only one example of someone practicing something other than journalism -- as he took to NPR airwaves to declare Nouri the winner before ballots were even counted.  Lovely Quill still has his job -- for NPR, I mean.  Don't know if he was ever paid by the US government -- he might have just been donating his services.  Deborah Amos, by contrast, did do actual reporting.  She did an analysis, in fact, about the election.  Anyone paying attention and interested in honesty would have known Nouri was not cruising to an easy victory as so many in the US press were insisting in late 2009 and early 2010.

With elections eventually looming in Iraq, get ready for the "We started a million new projects" schtick suddenly by ruling parties.
6:47 AM · Sep 2, 2021

That's right.  The lead up to the elections are when politicians pretend to care.  I especially loved how, a month before the 2010 elections, Nouri brought large ice to a village without potable water -- had been that way all throughout his first term but when he needed votes, he brought them ice.

The western press is working overtime to re-elect Mustafa.  Mustafa is the White House's choice for prime minister so the western press has taken to portraying him as successful.  He was part of another do-nothing conference over the weekend and, like the one only months ago, it accomplished nothing but we're supposed to see it as his success and he's so powerful and he's so . . .  He's nothing.  He's accomplished nothing.  But the press is working overtime to pretend otherwise.  It's as though someone's cloned Quil Lawrence and we now have thousands of Quils.

I've never seen Slemani roads etc look as good as right before an election for example. It is the one time of the election cycle where some surface investments actually get made.
6:48 AM · Sep 2, 2021

The methane cloud, spotted by geoanalytics firm Kayrros SAS using European Space Agency satellite data, was halfway between Baghdad and Basra, an oil and gas hub in southern Iraq. The rate of release was about 130 tons per hour, which has approximately the same climate-warming impact as 6,500 U.K. cars running for a year.

Remember, no real regulation in Iraq -- that's why the hospital fires keep happening -- Mustafa has everyone on the honor system -- and the Iraqi people and the entire world pay the cost.

It seems the international community is trying as much as possible to help create a stable electoral atmosphere,paving the way for the formation of a new government and parliament capable of restoring the situation to what it was before the protests of Oct

Restore it to what it was before The October Revolution?  What it was before the protests began was a corrupt system?  I hope that Twitter's character limit explains that Tweet.  I hope that's not a fully formed thought being expressed but one narrowed due to character limits.  Yes, Mustafa al-Khadimi is an awful prime minister; however, dropping back to October of 2019 is not an improvement, that was just another disaster.

The upcoming elections have caused a lot of stress and a lot of tensions.  That's been apparent everywhere including in the KRG and in one of their political dynasties: The Talabanis.  Lorraine Mallinder (IRISH TIMES) reports:

It was a great story. Lahur Talabani was the south London boy who brought the fight to Islamic State in his native Kurdistan, playing a leading role in intelligence and counterterrorism. A staunch Kurdish nationalist, he called out the corrupt elites and stuck his neck out for his fellow Kurds in Syria and Turkey.

At least, that was the image. Lahur was feted by the rank and file of his Patriotic Union of Kurdistan (PUK), the party he led with Surrey-raised cousin Bafel Talabani. In the city of Sulaymaniyah, the PUK’s power base in eastern Kurdistan, he wielded this star power on social media. But it all fell apart when team Bafel started lobbing accusations of smuggling, extortion and spying at him – to name some of the milder claims.

Now Lahur’s home is surrounded by armed men, with checkpoints set up in the surrounding neighbourhood. His media outlets, apparently a must-have for all leading politicians here, have been shuttered. He “temporarily” handed all power to his cousin – to no avail. Under pressure to leave the country, he has sought recourse in the courts, professing a possibly misguided faith in the independence of Kurdistan’s judiciary on his Facebook page.

This unseemly bust-up in the filthy rich political clan, second in power only to the mighty Barzanis, who control the dominant Kurdistan Democratic Party (KDP), would have locals on the edge of their seats, were they not preoccupied with more pressing matters – such as rampant poverty, power outages and this summer’s acute water shortages. This, in a region pumping out about half a million barrels of oil a day.

With neighbouring Turkey and Iran taking an interest, there could be more to this than meets the eye. But the consensus seems to be that it’s merely a spat between two power-hungry cousins slugging it out for supremacy, following the death of party granddaddy Jalal Talabani – Lahur’s uncle and Bafel’s dad.

“The #KDP has nominated 17 women out of 52 candidates in the upcoming parliamentary #elections in #Iraq”: Dr. Viyan Suleyman, Secretary of #Kurdistan #Women’s Union. 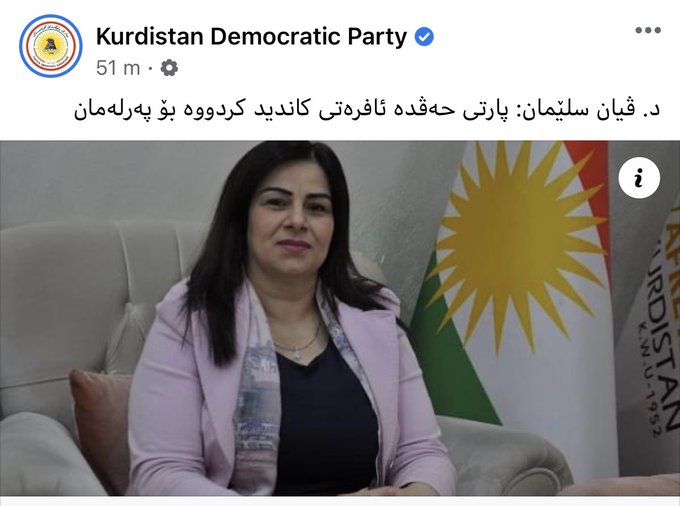 Iraq’s Shia controlled government faces more dangerous threats locally; internal corruption and Iranian efforts to turn Iraq into a client state or unofficial part of the Iranian Shia Islamic empire. The current situation is that you have about 90 percent of Iraqis opposed to corruption, many of them very opposed. Since 2015, there have been repeated public gatherings that evolved into large anti-corruption demonstrations that continue. Many of these demonstrations are anti-Iran as well. While corrupt Iraqi officials and pro-Iran Shias are on the defensive, they are still a major factor in Iraq and Iraqis in general don’t want this to degenerate into another civil war. They just want less corruption, an improved standard of living and a major reduction in Iranian efforts to control Iraq.

The religious dictatorship in Iran is now dominated by the extremists, or “radicals”. Most of the extremist attitudes come from the IRGC (Islamic Revolutionary Guard Corps) who suffered greatly from the return of economic sanctions in 2017. Because of these sanctions the IRGC Quds force, which handles foreign wars and terrorism, saw its budget cut by half since 2017, forcing major reductions in Quds activities in Iraq, Syria and Lebanon. The IRGC was created in the 1980s to protect the new religious dictatorship and suppress, with violence, if necessary, local opposition to the new religious overlords. The IRGC has become increasingly assertive in backing radical solutions to problems and that has created a growing number of nationalist clerics, including some eligible to be one of the twelve senior Shia clerics who run the Guardian Council. The senior clerics have become divided into mutually antagonistic factions. The “moderates” are those who want to put Iran’s interests first and concentrate on the economy and reducing the poverty that is visibly turning more Iranians against their government, Islam and all the foreign wars the radicals have dragged Iran into. These “realists” are also nationalists and often called “moderates” by foreigners. The IRGC believes force is the key to Iranian power and all Iranians must support that. Most Iranians do not support the IRGC and for over a decade have become increasingly open about that opposition. The IRGC has killed over a thousand of these protestors over the last few years. As a result of this the Guardian Council has blocked nearly all “nationalist” candidates from running in the latest national elections. This meant the new parliament and senior leaders were dominated by IRGC and Quds Force veterans, including several recognized as terrorists or guilty of war crimes.

No, Hillary's loss is not Susan Sarandon's fault. Shame on whores like Jill F who insist otherwise.  What we know about Jill is that while people were fasting for peace and Iraq was being ethnically cleansed, 'feminist' Jill was posting bikini selfies to her website as she took a much 'needed' vacation.

She's not to be taken seriously.  Susan Sarandon is a kind hearted person who puts her principles on the line.  Applause to Sue