Military officers, both Iraqi and American, said that insurgents had probably fled the area after news media reports that the sweep was to begin soon, though officials had been saying publicly that it would be likely to begin in early August.
To achieve some degree of surprise, orders to begin the operation came late Monday, catching even some military personnel off guard.

The above is from Campbell Robertson's "Iraqi Army Seeks Out Insurgents and Arms in Diyala, Backed by U.S. Forces" (New York Times) on what's being seen by some as the for-show action intended to prop up al-Maliki whose 'job' as puppet is in increasing danger as he continues to displease his puppet masters in DC. Alexandra Zavis' "Iraq army flexes its muscle in Diyala province" (Los Angeles Times) offers:

Iraqi soldiers and national police encountered no resistance as they knocked on doors in Baqubah and the town of Khan Bani Saad, about 15 miles south. But this is well-trod ground for the Iraqi forces and their U.S. counterparts, who have conducted repeated operations in the area since last year.

Independent Presidential Candidate Ralph Nader will be joined by former Salt Lake City Mayor Rocky Anderson at a Nader/Gonzalez campaign rally Thursday, July 31, 7:30 p.m. The rally will be held in the Libby Gardner Concert Hall, 1375 E President Circle, Salt Lake City. A suggested contribution of $10/ $5 students will be asked at the door.

Mr. Nader will speak about critical issues the major party candidates have taken "off the table," that the Nader/Gonzalez campaign has put on the table, including:


About the Nader/Gonzalez Campaign
According to a July 1 CNN poll, Ralph Nader is polling six-percent nationally, higher than his highest major poll numbers during the same time period in 2000 and approaching the ten-percent threshold required for eligibility to participate in "America's Presidential Debate in New Orleans", a non-Commission on Presidential Debates sponsored event scheduled for September 18. In the key swing state of Michigan -- whose voters were partially disenfranchised by the Democratic National Committee -- an EPIC-MRA poll found Nader at eight-percent.

About Ralph Nader
Celebrated attorney, author and consumer advocate Ralph Nader has been named by Time Magazine one of the "100 Most Influential Americans in the 20th Century". For more than four decades he has exposed problems and organized millions of citizens into more than 100 public interest groups advocating solutions. He led the movement to establish the Occupational Safety and Health Administration (OSHA), the Environmental Protection Agency (EPA), the Consumer Product Safety Commission, and enact the Safe Drinking Water Act, the Motor Vehicle Safety Act, the Freedom of Information Act (FOIA) and countless other pieces of important consumer legislation. Because of Ralph Nader we drive safer cars, eat healthier food, breath better air, drink cleaner water, and work in safer environments. Nader graduated from Princeton University and received a LLB from the Harvard School of Law.
For more information on the Nader/Gonzalez campaign, visit VoteNader.org.

And Brady notes this from Team Nader:

Join an invite-only call with Ralph and Matt 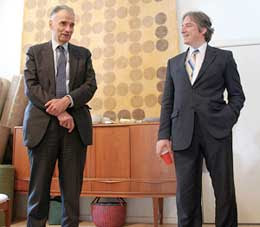 We've just finished another hectic day here in the D.C. office and I wanted to dash off a quick udpate about the "Dinner with Ralph" e-mail contest. The whole team (including Ralph, who came up with the idea!) is blown away to see so many people sign-up as contestants, and even more as participants and supporters.

Over the last five days, over 200 of our supporters have reached out to more than 10,000 of their friends -- clearly there's nothing like a little of the good ol' competitive spirit!

So -- quickly -- I want to remind you that it's not to late to participate in the contest. The contest doesn't end until August 7th, so there's lots of time left to win dinner with Ralph, or Matt, or to win one of the many other prizes that are available.

Reach out to friends. Win prizes. It's really that easy. And we make it even easier by providing a way for you to invite up to 30 friends at a time from your address book -- you can go back and invite more friends as often as you'd like.

The people who are currently in the lead -- Ramy Mousa of Baton Rouge, LA; Anna Chambers of Fort Payne, AL; Scott Keddy of Cambridge, MA -- all got there in just five days. Not only is there enough time to catch up, but with over 10 days left in the contest, there's time to be queen (of king) of the hill. (The contest leader board is one of the most popular pages on our site right now!)

We really need more people to get in on the competition. Why? Because this is our chance to reach out beyond "the choir" and to speak to the people you know who may not even be aware of the Nader/Gonzalez campaign. They may not realize that Nader/Gonzalez is ready to stand up for the issues that matter in this election; issues like single payer health care, reversal of U.S. policy in the Middle East, and military withdrawal from Iraq. These are issues that need to be on the table this year.

That's about it for today. Remember:

mark greenblatt
Posted by Common Ills at 5:10 AM