Dear Editor,
Tuesday, July 15th will go down as a black day in Canadian history. The first Iraqi War Resister from the American military was deported from Canada for refusing to fight in a war that Canada refused to get involved in, that the United Nations has called illegal, and that much of the world sees as an invasion of a sovereign country for oil resources.
Robin Long, 25, was one of hundreds of U.S. men and women who have struggled with the decision to risk life-long separation from their families, friends and their country to stay in Canada. If they return to the U.S. they can face arrest, court martial, prison sentences, deployment to Iraq and being blacklisted from employment and education opportunities for the rest of their lives. Many of these youth have been targeted by an 'economic draft', a US recruitment effort that targets the poor with offers of employment, health care for family members, higher education and more if they sign up. These promises are not always kept.
Our country has a history once known for peacekeeping, for the art of diplomatic negotiation, for refuge in times of war, for welcoming conscientious objectors like the Mennonites, the Quakers, the Doukhobors, and the Vietnam draft dodgers. These immigrants have made huge contributions to the life of their communities and to our country.
Prime Minister Harper's Conservative government chose to direct the deportation of Mr. Long DESPITE the June 3rd House of Commons vote in favour of a resolution introduced by my colleague, Olivia Chow, Federal NDP Immigration Critic. This motion called on our Government to cease any removal or deportation actions against conscientious objectors who have refused or left military service related to a war not sanctioned by the UN. It called for the government to immediately set up programs to allow their application for permanent residency status, so that they can remain in Canada.
Further, on June 27th Angus Reid released a poll showing that 64% of Canadians believe that US War Resisters should be allowed to stay in Canada, re-enforcing the fact that the vote in Parliament was reflecting the will of the Canadian people.
On July 4th the Federal Court of Canada acted, and ruled that war resister Joshua Key should have his denied refugee claim reviewed by the Refugee Board of Canada. The court found that someone who refuses to take part in military action which "systematically degrades, abuses or humiliates" combatants or non-combatants might qualify as a refugee.
On July 9th, the Federal Court further ruled that war resister Corey Glass's order for deportation the next day should be stayed for an indefinite period of time.
The Canadian people and the Parliament of Canada have spoken.
I call upon Minister Day, Minister Finley and Prime Minister Harper to respect the will of Parliament and the Canadian people and to stand up to President Bush to ensure that American soldiers who oppose that war receive a welcome in Canada.
Alex Atamanenko, MP BC Southern Interior

The above is a letter to the editor sent to Arrow Lakes News. Alex Atamanenko is an MP from the New Democratic Party. Why do people sign up? Some don't. Some sign up for the 'delayed entry program' while they are underage and that does not mean they have to go into the military. But the recruiters love to lie. Irving Gonzales and Eric Martinez (as well as their families) found that out. In "Caught on tape: Army recruiters threaten high school students" (text and video), KHOU's Mark Greenblatt reports on what happened to both Gonzales and Martinez when both decided, no, they weren't interested. Which they can do. The military cannot hold young adults to contracts signed as juveniles. (Stop-loss should be legally tested on the grounds of involuntary servitude and the bulk of service contracts for would not stand up in a court of law based on the court's historical standing regarding time of length and age of consent.) The delayed entry program is not enlistment. When Gonzalez decided to tell his recruiter he'd changed his mind and now planned to go to college instead, the lies started and never ended:

The reaction: Gonzalez said a recruiter told him if he did drop out, they would send him to jail.
Scared, Gonzales called Sgt. Glenn Marquette, a supervisor at the Greenspoint Recruiting Station.
Marquette told Gonzales there was no way out.
"You signed a binding contract," he said.
But that wasn't true.
Army recruiting regulations say delayed entry members can leave any time. They specifically mention "under no circumstances will any (recruiter) threaten, coerce, manipulate, or intimidate (future soldiers), nor may they obstruct separation requests."
Further, they state: "At no time will any (recruiter) tell a (Delayed Entry Program) member he or she must go in the Army or he or she will go to jail."
But when Gonzales asked Marquette what would happen if he just didn't show up for service, a phone recording captured this reply:
"Then guess what?" said Marquette. "You're AWOL. Absent without leave. You want to go to school? You will not get no loans, because all college loans are federal and government loans. So you'll be black barred from that. As soon as you get pulled over for a speeding ticket, they're gonna see you’re a deserter, they're going to apprehend you, take you to jail."
Marquette continued: "So guess what? All that lovey-dovey 'I wanna go to college' and all that? Guess what? You just threw it out the window, because you just screwed your life."

Glenn Marquette needs to be in prison. Not a slap on the wrist, he needs to be thrown in prison. He has a power and he has a trust -- he abused both. Exploitation of minors. Firing isn't good enough. They've been placed in a position of trust, they are deceiving and lying and people's lives are at risk. as KHOU points out, it keeps going on and on:

Three years ago in May of 2005, we found that another recruiter from that station, a Sgt. Thomas Kelt, had left this phone message to a high school student. This time the issue was simply keeping an appointment to talk:
"By federal law you got an appointment with me at two this afternoon at Greenspoint Mall," Kelt told him. "OK? You fail to appear and we'll have a warrant, OK? So give me a call back."
Our investigation into that call led to the Army announcing a national stand-down so all of its recruiters could re-examine their methods and regulations.
But just two months later, 11 News found that instead of punishing Sgt. Kelt, the Army had promoted him to the role of station commander at a neighboring recruiting station. That meant he would supervise and train other recruiters on how to do the job.
(And today? the Army confirms Sgt. Kelt still holds that supervisory position, but has since been transferred out of Texas.)

Again, the link has video and text.

In a news brief round up at the Toronto Sun, this item is included:

An American man wanted in the U.S. on desertion charges who had apparently been living for months in Brampton has been arrested while trying to cross the border back into the U.S. American customs officials apprehended Tyrone Pachauer, 23, at the Peace Bridge border crossing in Fort Erie on Monday.

To show your support for US war resisters in Canada, there are a number of actions you take. To pressure the Stephen Harper government to honor the House of Commons vote, Gerry Condon, War Resisters Support Campaign and Courage to Resist all encourage contacting the Diane Finley (Minister of Citizenship and Immigration -- 613.996.4974, phone; 613.996.9749, fax; e-mail finley.d@parl.gc.ca -- that's "finley.d" at "parl.gc.ca") and Stephen Harper (Prime Minister, 613.992.4211, phone; 613.941.6900, fax; e-mail pm@pm.gc.ca -- that's "pm" at "pm.gc.ca"). Courage to Resist collected more than 10,000 letters to send before the vote. Now they've started a new letter you can use online here. The War Resisters Support Campaign's petition can be found here. Long expulsion does not change the need for action and the War Resisters Support Campaign explains: "The War Resisters Support Campaign is calling on supporters across Canada to urgently continue to put pressure on the minority conservative government to immediately cease deportation proceedings against other US war resisters and to respect the will of Canadians and their elected representatives by implementing the motion adopted by Parliament on June 3rd. Please see the take action page for what you can do."

Amanda notes this from Team Nader: 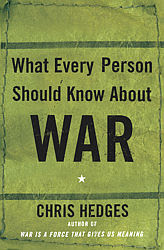 We were watching C-Span yesterday.

Lamb asked Hedges who he's going to vote for this year for President.

Hedges did not hesitate.

"I can't vote for anybody who doesn't call for an immediate end to the war in Iraq."

Hedges is a beacon of morality and courage in swamp of corruption, dishonesty and cowardliness.

And Hedges stands with Nader/Gonzalez -- the anti-war candidacy in 2008.

Hedges is just out with a new book, with Laila Al-Arian, titled Collateral Damage: America's War Against Iraqi Civilians. 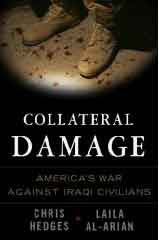 He's the author of two other anti-war classics:

What Every Person Should Know About War

War is a Force that Gives Us Meaning.

Luckily, we've come across a stash of all three.

And for a donation of $200 now to fund our current ballot access drive, we'll ship you all three books -- Collateral Damage, What Every Person Should Know About War, and War is a Force that Gives Us Meaning.

So hit the donate button now.

And these three anti-war classics will be yours.

This coming fall, the Nader/Gonzalez campaign is positioning itself to make the war in Iraq a central issue in the November campaign. 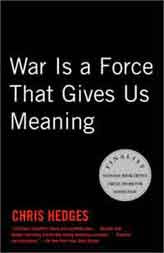 But first, as you know, we're in the middle of nationwide drive to put Nader/Gonzalez on 30 state ballots by August 10 -- on the way to 45 ballots by September 20.

So, donate $200 or more now, and we'll ship you the anti-war trilogy by Hedges.

This three book set makes a great gift for young and old alike during this campaign season.

(Only one set of three books per donation of $200 or more. If you would like two copies, please donate twice. Three copies, donate three times.)

And get a great set of books in return.

Together, we are making a difference.

PS: After you order your books, watch the two hour interview of Hedges by Brian Lamb here.

chris hedges
Posted by Common Ills at 5:25 AM