The silences on Iraq

Residents of New Baqubah woke up Wednesday to a sight they had never seen before: hundreds of Iraqi national police officers blanketing the neighborhood in a city that until last year was a center of the Sunni Arab-driven insurgency.
For many of them, it was not a comforting sight. Most of the upscale neighborhood's doctors, teachers and retired military officers are Sunni Muslims, and the force sent from Baghdad to protect them is overwhelmingly Shiite Muslim.

The above is from Alexandra Zavis' "Residents wary as Iraq police blanket Baqubah" (Los Angeles Times) who may be the only one reporting on the actions in Diyala Province (it's seen as a for-show action and not a real one). While that silence may be understandable, can someone explain the July 30 report? The Special Inspector General for Iraq Reconstuction issues a HUGE report yesterday and where's the coverage. (Zavis and other Iraqi based correspondents aren't sleeping on the job, this should have been covered by DC correspondents.) We noted it in the snapshot yesterday and if it was going to receive no attention we would have noted more on it. Joe Sterling and Adam Levine cover it for CNN ("Report: U.S. 'wasted' $560 million on Iraq repairs"):

The United States has "wasted" more than half a billion dollars in Iraq repairing facilities that were damaged because of poor security, the special inspector general for Iraq reconstruction says in a report released Wednesday.
Stuart Bowen's quarterly report arrived at a price tag of $560 million by tallying the results of more than 100 audits his office has conducted.
Further billions had to be diverted from reconstruction to security because the Bush administration did not adequately foresee how volatile Iraq would be when it began rebuilding the country, the report says.

Alissa J. Rubin and Steven Lee Myers take to the New York Times to offer "Deal on a Security Agreement Is Close, Iraqis Say" which tells us what they think might happen -- not what's happened. Whispers and gossip passed off as news. Below is the only named source section:

"The intention is to maintain full sovereignty for Iraq with close observation of the security situation, which will determine exactly when Iraq will no longer need American forces," said Jalaluddin al-Sagheer, a member of Parliament from the Islamic Supreme Council of Iraq who is close to the negotiations.

They note that Bully Boy will speak about Iraq this morning.

They don't quote him, but his remarks will include: "We remain a nation at war. Al Qaeda is on the run in Iraq -- but the terrorists remain dangerous, and they are determined to strike our country and our allies again. In this time of war, America is grateful to all the men and women who have stepped forward to defend us. They understand that we have no greater responsibility than to stop the terrorists before they launch another attack on our homeland. And every day they make great sacrifices to keep the American people safe here at home. We owe our thanks to all those who wear the uniform -- and their families who support them in their vital work. And the best way to honor them is to support their mission -- and bring them home with victory." In other words, more sop tossed out at the White House.


AP reports that journalist Ali al-Mashhadani is being held by the US military at Camp Cropper. al_Mashhadani works for Reuters, BBC and NPR. Dean Yates (Reuters) reports that (as usual) no charges have been brought against Ali and quotes David Schlesinger (Reuters Editor-in-Chief) explaining, "Any accusations against a journalist should be aired publicly and dealt with fairly and swiftly, with the journalist having the right to counsel and present a defense." 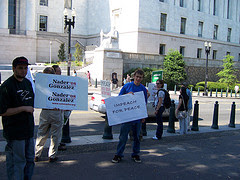 Last Friday on Capitol Hill, the House Judiciary Committee weighed in on “executive power and its constitutional limits” in an inconsequential discussion of King George’s imperial presidency.

There would be no vote on impeachment, no discussion of the dereliction of Congressional duty, and no Ralph Nader.

Ralph Nader, who has long championed the necessity of impeachment for W's repeated, defiant high crimes and misdemeanors, was not invited to testify at the Rayburn Building on Friday morning. Writer DC Larson summed the situation up, proclaiming that the “Democrat-led Congress are as unconcerned about political justice as is any neo-con in Rupert Murdoch's Rolodex."

The Nader campaign was there to observe, along with hundreds of other concerned citizens, but couldn’t crack the guest-list, despite a run-in with Ms. Kucinich . Only 16 individuals were granted admission into the hall to observe testimony from the following witnesses:

Elliott Adams
President of the Board
Veterans for Peace

Said Chairman John Conyers with regard to his committee’s inaction, "we are not done yet, and we do not intend to go away until we achieve the accountability that Congress is entitled to and the American people deserve."

Let's hold Congress to this.

joe sterling
Posted by Common Ills at 5:19 AM