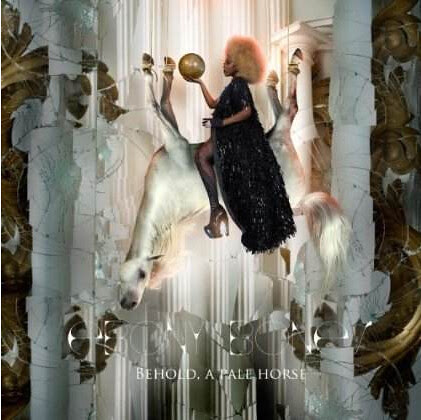 Ebony Bones is the singer-songwriter from England who has done everything from Macbeth to British soaps.  She's a contemporary of the late Amy Winehouse's (the two attended the Sylvia Young Theatre School in London) and there are moments in "While The People S.L.E.E.P." that you can hear an echo of Amy, a sign of where she might be today if she were still alive.  The track shakes and surprises in ways not felt since "Rehab."  Listening to that monster hit today, it's hard to remember that when it came out it was not like everything else on radio but a different sound completely.  The fresh excitement when she was introducing the song on a variety of programs (I caught her on The Tonight Show with Jay Leno), the way the song grabbed you, is easy to forget today now that it's a radio staple.   That same sense of revelation is present as the song struts and Ebony insists "We're shining bright, we're shining bright!"

Winehouse brought a sense of rediscovery to elements of sixties pop and soul and, listening to Ebony Bones' Behold, A Pale Horse, I'm feeling a similar repurposing.  Only instead of mining the gold in Motown and the Brill Building, Ebony Bones is grabbing from Jimi Hendrix and Jim Morrison.  In her best percussion vocals moments, she recalls the sleepy stroll of The Lizard King while her sonic scuplting throughout this amazingly produced album (produced by Bones) recalls the heights Hendrix attempted to take listeners too.

Ebony Bones is attempting to move people as well, take them on a trip, and that's evident throughout but possibly most obvious on her cover of  The Smith's "What Difference Does It Make" when the elements of her sonic landscape include the London's Children Choir.  In the album, I hear the experimentation of 1968 that made it such an important musical year: Hendrix's Electric Ladyland, The Doors' Waiting For The Sun, Jefferson Airplane's Crown of Creation, the Rolling Stones' Beggars Banquet, the Mamas and the Papas' The Papas and The Mamas and The Kinks' The Kinks Are The Village Green Preservation Society.  Ebony Bones also utilizes the Mumbai Symphony Orchestra on the title track and Mechanical Elephant on "Breathe." On "I.N.V.I.N.C.I.B.L.E.," she drops the breadcrumbs that lead from Jim Morrison to Kate Bush on through Morrisey and  PJ Harvey and back again.

The album is the stumble from one charged experience to another, a nightscape of purples and blues. Most of all, Behold, A Pale Horse gives experimentation a good name.  Twelve tight tracks add up to an actual listening experience and one of the year's most ambitious albums.  It drops August 5th but you can stream it currently at NPR.  I would recommend you buy this on CD because I doubt the digital booklet will do justice to the packaging of the actual album (this should be a Grammy contender for the packaging alone -- it's up there with Michael Amzalag and Mathias Agustyniak's packaging for Bjork's One Little Indian).