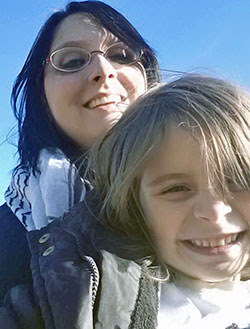 After deploying to Iraq in 2006 and spending a year as an analyst in Baghdad, my (now EX) husband and I went AWOL, suffering from PTSD. My ex-husband received an other than honorable discharge after he was apprehended in 2010.

I am now facing charges and General Court Martial - the highest level of court martial and the harshest penalties received for going AWOL. I am a mother, a college student, and a organic gardener. I need help raising money for my lawyer to fly in for the pre-trial hearing as well as the trial, as well as funds for purchasing the "dress blues" - Army service uniform - for trial.

Let's come together as a community to meet Sara's modest needs at this important time. Stay tuned for additional actions that you might take to support Sara and her child. Recently she shared on her public IVAW profile page:

I enlisted in the Army at 17, I think, as part of the D.E.P. I spent a year messing around, getting in trouble, and realizing that I was not making good decisions before I decided to go through with heading on to Basic Training and then AIT to become an intelligence analyst (96B). I left for Basic in June 2004. I was stationed eventually at Fort Hood in the G2 office, and then went to Iraq from December 2005 through November 2006. I went AWOL in January of 2007 and looked back once, only to go AWOL again (September 2007). I joined Iraq Veterans Against the War when a protest march interrupted my trip to the beach in Kennebunkeport, Maine, in early summer of 2007. I currently am divorced, [and] have a usually-lovely 4 year old who loves He-Man and Shawna Foster.