That would be impressive.

If the bombings accomplished one damn thing.

But they haven't, have they?


It's good at running Islamic State members off.

But to other places.

As we noted back in February:

And that's why, despite the White House planning an operation to retake Mosul in February, the month is now ending with no such attempt.
Mosul was taken over by the Islamic State in June.  Retaking it might have symbolic value.
But now the White House has aired the option that Mosul might be invaded soon . . . or in April . . . or in May.
These 'deadlines' are vaporous.
The reason for that, clearly, is that the Iraqi military is not thought to be up to the challenge of retaking Mosul.
For Mosul to be of any value, there has to be immediate operations.
By that I mean, think of the Islamic State as a tube of toothpaste and let's consider Mosul the middle.
Squeeze the middle of the tube and the toothpaste does not vanish.
Instead, it spreads out to both ends of the tube.
Should Mosul be retaken, the most obvious move for the Islamic State was to grab new areas or fortify existing ones.
Should an operation to retake Mosul be carried out and be successfully carried out, the immediate time after that effort would have to see a military force stepping up to ensure that the Islamic State fleeing Mosul did not spread elsewhere.


The toothpaste analogy especially stands today as Sinan Salaheddin and Sameer N. Yacoub (AP) report that the Iraqi military -- via Minister of Defense Khalid al-Obeidi -- is claiming (limited) success in Anbar Province today and doing so as Baghdad bombings claimed at least 18 lives.

Interestingly, AP doesn't note rumors of a massacre of civilians even though, as All Iraq News reports, the same Minister of Defense, Khalid al-Obeidi, has issued a denial of any massacre in Nadhim al-Taksim.


Back to the acknowledged violence, so they rush to fight in Anbar and the violence increases in Baghdad.

There is no comprehensive strategy.

And the only answer is a political solution.

The leading figure of the Kurdistan Alliance, former MP, Mahmoud Othman said "import external solutions to the problems of Iraq will make them more complicated." He said in a statement to the National Iraqi News Agency / NINA /: "The real national reconciliation is the only solution to the country's stability and easing its crises, and should include everyone," pointing out that "the stability of the country depends on the understanding and the convergence of the political blocs in their positions and to get rid of Foreign powers driving it."


Brett always Tweets about US military action because he has nothing to offer about any US diplomatic efforts.


By contrast, England's Philip Hammond has actual diplomatic efforts to Tweet on. 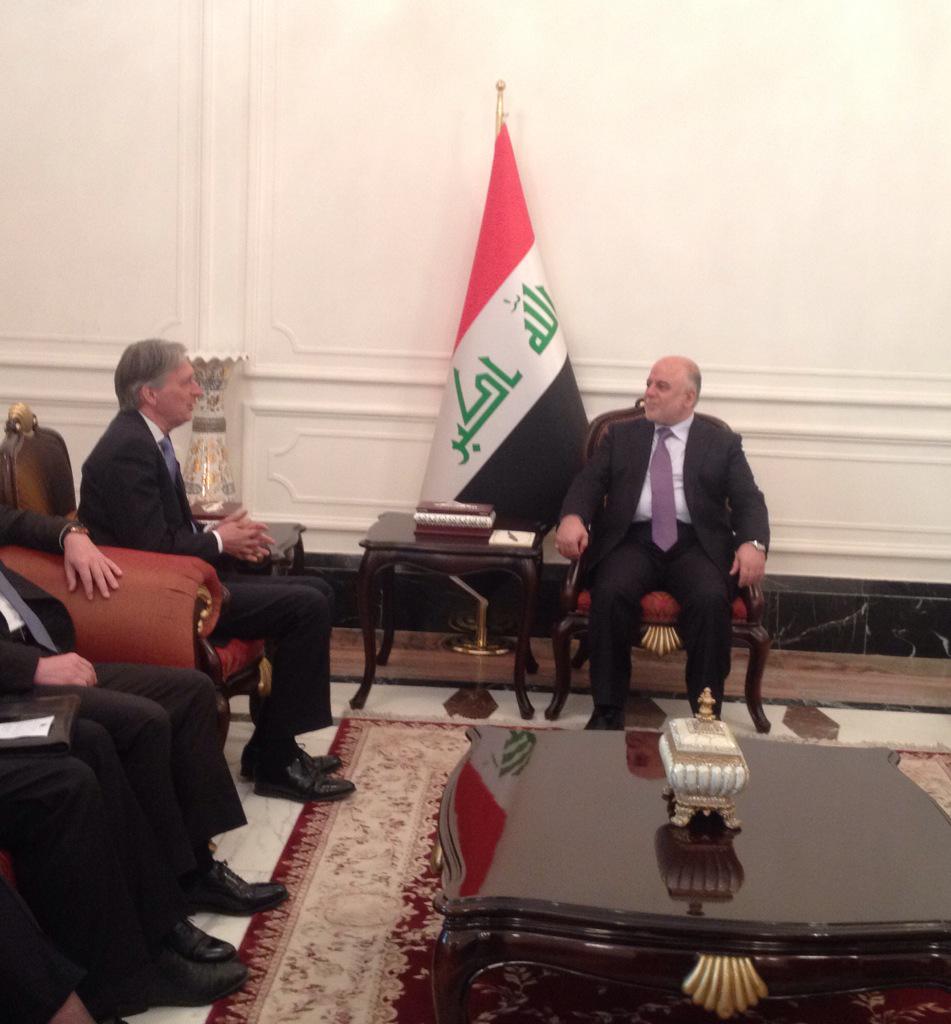 I was asked if we'd note Josh Rogin's report for WND?  We'll note this section:

Bush then went into a detailed criticism of Obama's policies in fighting the Islamic State and dealing with the chaos in Iraq. He called Obama's decision to withdraw all U.S. troops in Iraq at the end of 2011 a "strategic blunder." Bush signed an agreement with the Iraqi government to withdraw those troops, but the idea had been to negotiate a new status of forces agreement to keep U.S. forces there past 2011. The Obama administration tried and failed to negotiate such an agreement.


I'm not interested in Bully Boy Bush's evaluations on anything -- unless he wants to explore his culpability in War Crimes.  But considering that -- check the archives -- we noted in real time, November 2008, that the Status Of Forces Agreement was a three year agreement that could be succeeded by another agreement while the press and whores (that includes Antiwar.com, sadly) insisted it was an end to the Iraq War.

And Barack attempted to extend it but couldn't because Nouri wanted more troops than Barack was offering.

The whole point of the three year agreement was to help Nouri.

The UN agreements had been one year long.  And Nouri had suffered each time with Parliament when he extended the agreements (without consulting the Parliament).  So the point was to get Nouri out of the three year agreement. It was also to extend it past the end of 2009 elections (which became March 2010 elections as a result of Tareq al-Hashemi objecting to the election law failing to include Sunni refugees).

Barack tried to get an agreement.  He failed.

Whether that was right or wrong, others can explore.

If you want my opinion, we can go into it in a snapshot this week.

I'm traveling in some vehicle
I'm sitting in some cafe
A defector from the petty wars
That shell shock love away
-- "Hejira," written by Joni Mitchell, first appears on her album of the same name


The number of US service members the Dept of Defense states died in the Iraq War is [PDF format warning] 4495.

The following community sites -- plus  Jody Watley, Z On TV, Iraq Inquiry Digest, Susan's On the Edge and Tavis Smiley -- have updated: