Remember when it started and people thought it would be over within 14 days?


It's not over still. 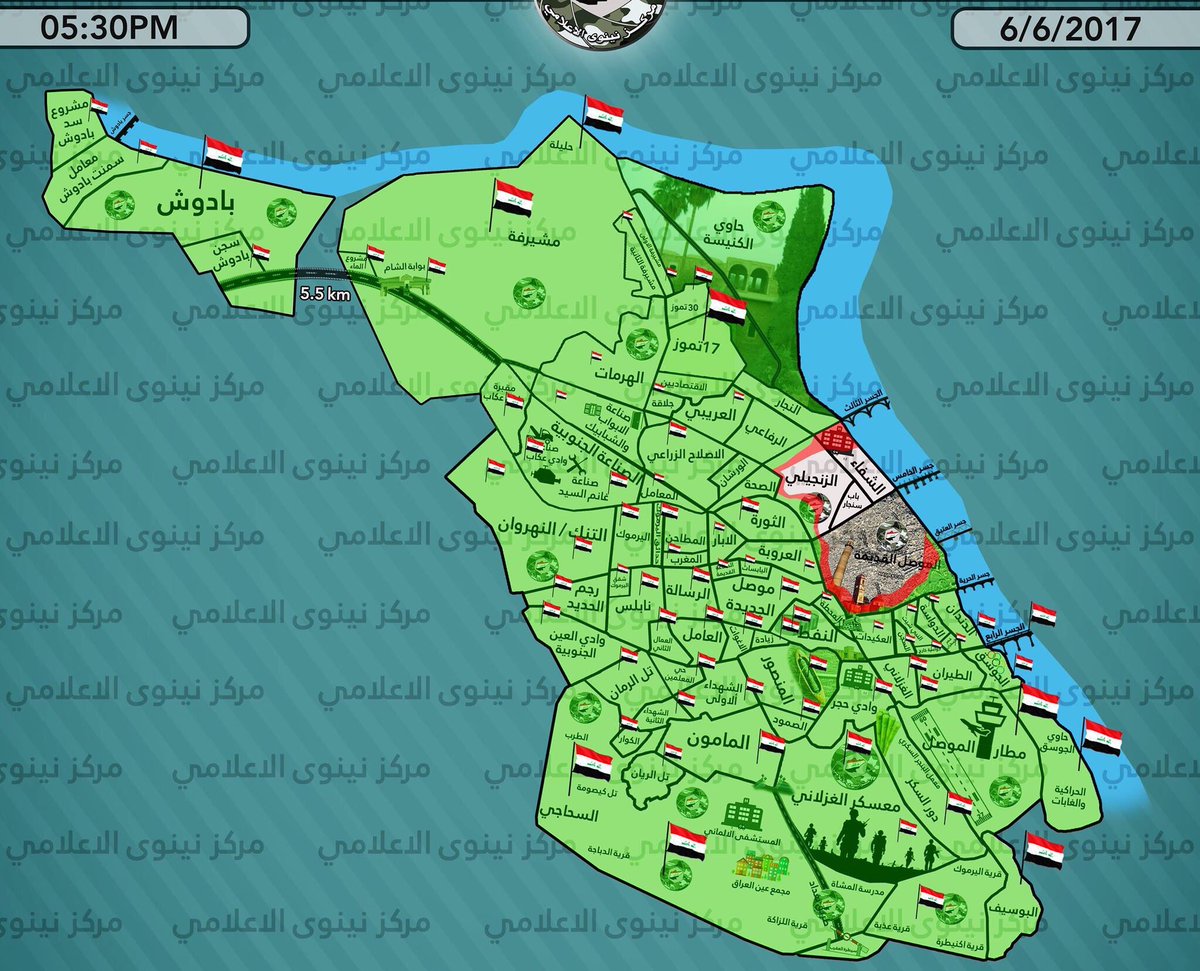 
The civilian death toll from a series of apparent Iraqi Security Force or United States-led coalition attacks between February and April 2017 suggests that the forces took inadequate precautions to avoid civilian casualties and that further investigation is needed, Human Rights Watch said today. Human Rights Watch documented seven attacks that resulted in at least 44 civilian deaths in five populated neighborhoods of west Mosul controlled by the Islamic State (also known as ISIS).
Human Rights Watch analysis of satellite imagery of western Mosul identified over 380 distinct impact sites in the Tanak neighborhood, where three of the seven attacks occurred, consistent with the detonation of large, air-dropped munitions between March 8 and April 26, when Iraqi forces declared they had regained control of the area. Munitions of this size can pose an excessive risk to civilians when used in populated areas, given their large blast and fragmentation radius. All warring parties should cease using explosive weapons with wide area effects in densely populated west Mosul.
“Residents and displaced people have sheltered for months in crowded houses, with ISIS sometimes using them as human shields, so any strikes – including the choice of weapons – should take these conditions into account,” said Priyanka Motaparthy, senior emergencies researcher at Human Rights Watch. “As Iraqi and coalition forces press forward with the west Mosul offensive, they should make sure that civilian casualties are kept to a minimum.”


Arwa Damon files a report on Mosul for CNN.

It's a shame that the report doesn't address all the suffering of the people in Mousl.

But then the hallmark of the established western reporters has been to ignore the abuses by the Iraqi forces.


To look the other way.

To Judy Miller their way through the day.

And an apathetic so-called 'resistance' could care less.

How far the US has sunk -- at least in the early years of the Iraq War, we paid attention.

Yes, I realize now that for many it was just so they could rage against Bully Boy Bush.


But it still resulted in Iraq being part of the news coverage instead of buried and forgotten.


Which US outlet will report on the above?


(We dealt with the nonsense HoDe's promoting and screeching about -- dealt with it in yesterday's snapshot.)

Just a piece of crap who pretended to be left.

Remember his talk about Iraq?

The Iraq War continues but Howard Dean's not going to call that out.

I've made many mistakes in my life but falling for carny barker Howard Dean was never one of them.

Numerous friends supported him so I made a point to catch one of his rallies.

I saw an empty suit who could grab whatever was in the headlines to get some attention.

They grab numerous issues and stick to them, working on them constantly.

Some pay off, some don't.

I found it very telling that MS. MAGAZINE repeatedly ignored both women to promote chattering heads in Congress who never worked a bill a day in their life.

Not what's important, not what matters.

Howard Dean's 2004 words should haunt him.  They should be hung around his neck and he should be forced to address Iraq on a daily basis.

In the House, Tulsi Gabbard -- like Murray and Baldwin in the Senate -- works constantly.

She does get press attention -- usually attacks from the press passed off as coverage.

When Tulsi's attacked and Howard's not, we live in an upside down world.

Every time he pipes off, some reporter should be asking about his previous statements.  Such as in January of 2004, when he insisted "I opposed the war in Iraq and I'm against spending another $87 billion there."

Then why are you silent today, he should be asked, as the bill is now in the trillions?

He was a fake and remains one.  The media lets him get away with it.  Idiots in the Democratic Party (not all members of the Democratic Party are idiots -- but a small strain of loud mouths regularly flaunt their ignorance) celebrate him as heroic.  He's a joke and, by supporting him, they make themselves jokes.


On June 16 through 18, the United National Anti-War Coalition (UNAC) will hold its annual conference, under the theme: “Stop the Wars at Home and Abroad: Building a Movement Against War, Injustice and Repression.” For three days, the convention center in Richmond, Virginia, will likely be the sanest building in the nation, the one place where you won’t be subjected to a barrage of warmongering fantasies about Russian threats to a non-existent American democracy. Instead, hundreds of activists from a broad range of organizations will be hard at work building alternatives to the Democrats and Republicans who have plunged the world into endless war and condemned most people in the United States to a dismal future of economic insecurity, the worst health care system in the developed world –- and if you’re Black, the ever-present threat of sudden death at the hands of police.
The all-seeing, eternally-listening, omnivorous data-crunching mechanisms of the national security state that was once justified by manufactured fears of Soviet Russians, then exponentially expanded to cage, kill and contain Black revolutionaries, and then vastly reinforced again to criminalize Black people as a group, creating the world’s biggest mass incarceration police state; this same repressive machinery that, after 9/ll, tracked and entrapped Muslim Americans like hunted prey, now spies upon the electronic communications of the entire world, mapping, profiling and, when possible, actively manipulating every wired person on the planet, as if the whole of humanity is a security risk to the rulers of the U.S. empire.

For far too many, those were empty words just being uttered for partisan purposes.

For those who actually meant them, you need to step up and start calling out these never-ending wars.

Various politicians have stepped into the public square to insist they would end it.

It hasn't been ended.