Wednesday, December 6, 2017.  Matthew Yglesias gets burned, the United Nations notices the push to lower the age of marriage for Iraqi girls to 9-years-old, the US government wants to help Iraqi refugees (as long as they're not in the US), and so much more.

Who doesn't love a good burn?  Let's start with one.

Like so many others with blood on their hands, Matthew Yglesias honestly thinks his support for and cheerleading of the Iraq War is forgotten.  It will never be forgotten.  Nor should it be.  The media can distract on a daily basis but the human desire for justice ensures that his support for the Iraq War will always be known until his dying days.

In Iraq, it's still sought and still not practiced.  HUMAN RIGHTS WATCH notes:

The Iraqi government and Kurdistan Regional Government (KRG) are conducting thousands of trials of Islamic State suspects without a strategy to prioritize the worst abuses under Iraqi and international law, Human Rights Watch said in a report released today. The haphazard approach and rampant due process violations are likely to deny justice to the victims of the worst abuses during ISIS control of parts of Iraq.
The 76-page report, “Flawed Justice: Accountability for ISIS Crimes in Iraq,” examines the screening, detention, investigation, and prosecution of some of the thousands of Islamic State (also known as ISIS) suspects in Iraq. Human Rights Watch found serious legal shortcomings that undermine the efforts to bring ISIS suspects to justice. Most significantly, there is no national strategy to ensure the credible prosecution of those responsible for the most serious crimes. The broad prosecution under terrorism law of all those affiliated with ISIS in any way, no matter how minimal, could impede future community reconciliation and reintegration, and clog up Iraqi courts and prisons for decades.
“Iraq’s handling of ISIS trials are a missed opportunity to show its people, the world, and indeed ISIS that it is a nation ruled by laws, due process, and justice, capable of bringing accountability for the gravest crimes and reconciliation for all of the communities affected by this war,” said Sarah Leah Whitson, Middle East director at Human Rights Watch. “Iraqi justice is failing to distinguish between the culpability of doctors who protected lives under ISIS rule and those responsible for crimes against humanity.”

The 'suspects' have tended to be anyone the Iraqi forces didn't like.

Many of the 'suspects' were already killed.

Now that they plan to do a few trials, you'd think even Iraq's corrupt judiciary would work to appear fair.

But if vengeance wasn't the guiding principal in Iraq, what would the rulers do?

HRW's Sarah Leah Whitson (quoted above in the HRW excerpt) wrote a column on the topic for REUTERS:


Sadly, these trials don’t even have the merit of establishing a judicial, historical account of IS’s crimes against the Iraqi people and a real sense of justice for the victims. Instead, the only charge IS suspects regularly face is “membership in Islamic State,” quite easy to prove with a one-sentence confession, but with no effort to establish the full record of crimes, such as genocide under international law or rape and murder under Iraqi criminal law. There’s no strategy to prioritize prosecution of those most responsible for the gravest abuses, instead of the “first in, first out” factory-line process, where, as one senior Iraqi judge insisted to us, “the Islamic State cook is as guilty as the Islamic State fighter.”
Victims of IS crimes, who should be able to testify about abuses they suffered and have the satisfaction of seeing the wrongdoers face justice in a court of law, are not included in these trials, leaving a vast disconnect between victims and the justice system. We already know that Iraqi courts have prosecuted at least 7,282 IS suspects under the counter-terrorism laws, and executed 92. Without a dramatic shift in approach, we will see hundreds more, if not thousands, executed, and ten times that number clogging Iraqi courts and prisons for decades.


The Special Representatives of the United Nations Secretary-General (SRSG) on Sexual Violence in Conflict (SVC), Pramila Patten, and for Children and Armed Conflict, Virginia Gamba urged Iraq to reconsider the draft amendments to the Personal Status Law that alter fundamentally the legal provisions governing marriage. It is a matter of concern that these draft amendments are silent on the minimum age of consent to marriage and do not apply to all components of Iraqi society.
“On 23 September 2016, H.E. Dr. Ibrahim Al-Eshaiker Al-Jaffari, the Minister of Foreign Affairs of the Republic of Iraq, signed with the United Nations a Joint Communiqué formally committing to prevent and address conflict-related sexual violence in the wake of Da’esh’s sexual violence crimes that shocked the world’s conscience. One of the key pillars of the Joint Communiqué is to ‘support legislative and policy reform to strengthen protection from and service response to sexual violence crimes.’
“My Office was repeatedly assured by H.E. Prime Minister Haider al-Abadi and the Speaker of the Council of Representatives Salim al-Jabouri that the fulfilment of each of the pillars of the Joint Communiqué are essential to Iraq’s post-Da’esh reconstruction,” SRSG Patten stated.
“The boys and girls of Iraq, already victims of grave violations resulting from years of conflict, are now at risk of being deprived of their childhood. The Government of Iraq must take all necessary actions to protect every child by preventing the adoption of policies that can harm children already exposed to armed conflict,” SRSG Gamba added.
“The Iraqi Council of Representative’s approval in principle of a draft law that does not explicitly set the minimum age of marriage to eighteen-years- for both women and men would represent a significant step back from those commitments. It could also increase divisions at a time when Iraq is recovering from the impact of the conflict with Da’esh  as well as conflict-related sexual violence,” Patten and Gamba added. They further noted that these proposed legal amendments could lead to possible breaches of Iraq’s legally binding commitments under the Convention on the Elimination of All Forms of Discrimination Against Women (CEDAW) as well as the Convention on the Rights of the Child.
SRSG Patten and Gamba concluded by strongly “urging the Government of Iraq to reconsider these proposed amendments to the Personal Status Law” and reaffirming their commitment “to stand with both the Government and people of Iraq to ensure that the scourge of sexual violence is eliminated and that children affected by armed conflict are protected.”
###
For media inquiries, please contact:
Fabienne Vinet: Office of the Special Representative for Children and Armed Conflict, New York. Tel.: +1 212 963- 5986; vinet@un.org
Letitia Anderson: Office of the Special Representative on Sexual Violence in Conflict, New York. Tel: +1 212 963 0910; andersonl@un.org

We've been covering this second attempt (an attempt was made to turn this into law back in 2014) since the start of November.  Though some have spoken out on this, Hayder al-Abadi hasn't been one.

Countries are not their leaders or their so-called representatives.  In most cases, those in power repeatedly betray the people they are supposed to serve.  (And they are insisted in this betrayal by idiots who worship and fawn over public servants instead of demanding accountability -- true under Trump, true under Obama.)


The betrayal is how so many people die in meaningless wars.

Hayder's not the only leader making a fool of himself.

In the United States, Donald Trump is president. 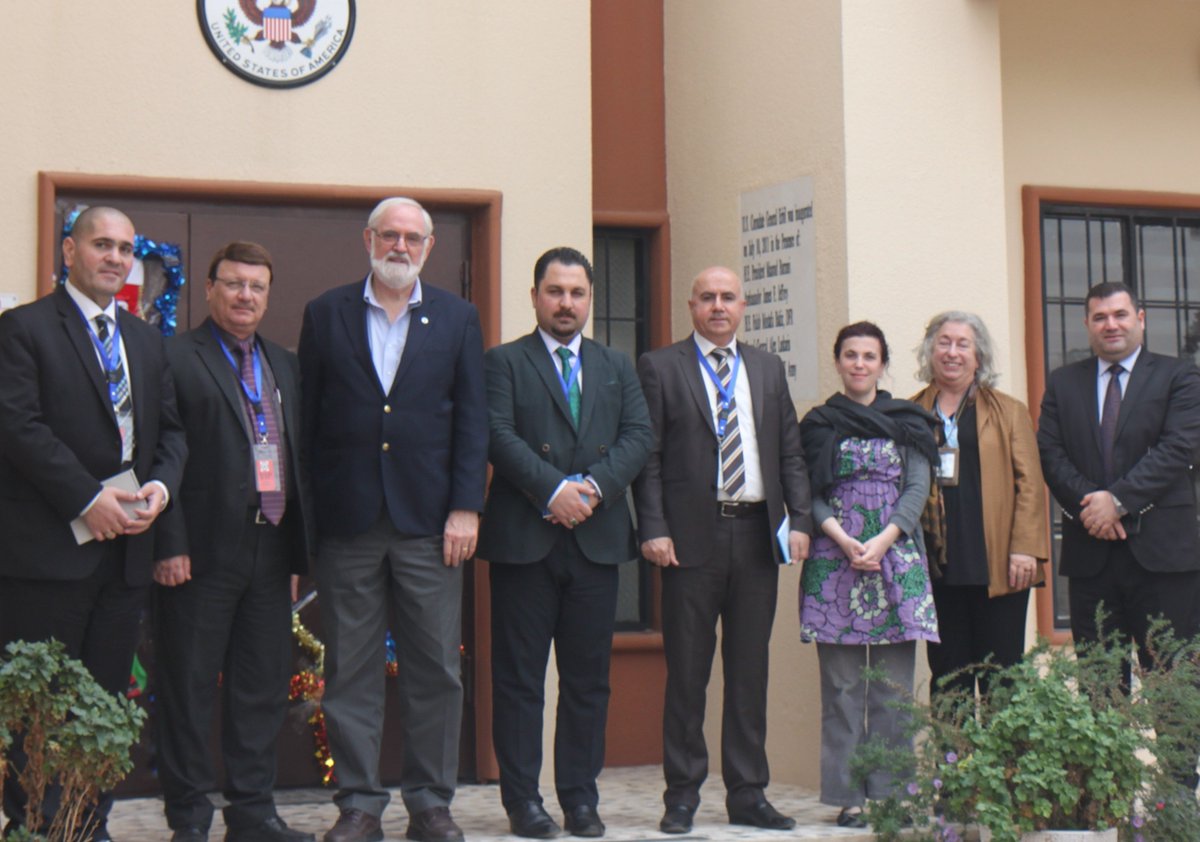 So the US government is committed to helping Iraqi refugees . . . as long as they're in Iraq?

That makes as much sense as the US government stating that Baghdad and Erbil need to have a dialogue but doing nothing to facilitate that -- or, for that matter, making it a condition of US aid -- military aid and financial aid.

At yesterday's US State Dept press briefing, spokesperson Heather Nauert was asked about the lack of vision and lack of motivation on the part of the US government.

MS NAUERT: How about that? I had a special topper just for you today.

QUESTION: That’s a first. I appreciate it a lot. Thank you.

QUESTION: Okay, and I want to follow up on that topper. The Kurdish Prime Minister Nechirvan Barzani complained today that the talks with Baghdad which you, the KRG, they’ve all – you’ve repeatedly called for, have not even started. So in the deputy secretary’s meeting with the Iraqi deputy foreign minister, was there any discussion of when those talks would begin?

MS NAUERT: Well, those talks would have to be agreed to between the Iraqi central government and also between the Kurds. So I’m not sure that they would commit to us that those talks will begin on a certain date, but we continue to call upon the Government of Iraq to sit down with the Kurds and have a conversation about this.

QUESTION: But the prime minister of the government of Kurdistan, Iraqi Kurdistan, said we want these talks to begin and Baghdad is doing nothing now. Are you – what are you going to do about this?

MS NAUERT: We feel – first of all, it’s not – it’s not the place of the U.S. Government to force these talks to happen. But we do firmly believe that that is the right thing to do and it should happen. So we just continue to call on the Government of Baghdad and also the Kurds to sit down and have a conversation together. We are willing to certainly help facilitate talks, but we would have to be asked by the governments to do that.

QUESTION: Has the Iraqi Government asked you yet?

MS NAUERT: Not to my knowledge.

MS NAUERT: Well, I think all diplomacy of a sorts is helpful. Certainly, France has a responsibility and forces serving in the region. They are a part of the D-ISIS coalition. I think it’s certainly important that the Iraqi Government would sit down and talk with Mr. Macron.


Now let's turn to sexism and other stupidity.


First, the sexism.  Is Karen Buchanan, who elected to weigh in on this topic, so stupid that she doesn't know women have served in the Iraq War and the Afghanistan War?  This goes to the problem we were noting yet again in yesterday's snapshot.

When you practice this sexism, you make life very hard for female veterans.

You render them invisible.

You make their lives much more difficult.

Is your sexism, your need to glorify men and render women invisible, so great that it justifies the harm you perpetuate with your stereotype that only men serve in war zones?

Karen Buchanan needs to think about that and why she thinks Donald's sons should have served but not his daughters Tiffany or Ivanka.

Second?  Avoiding the Vietnam War?  Good for everyone who did.  My opinion.

Who in the world would want Donald Trump in a war zone?

Is Karen Buchanan wishing more US troops were killed in Vietnam?

Because feeling that Donald should have served?  Seems to me that would have put even more service members at risk.