Wednesday, December 12, 2018.  Finally, someone to punish for the Iraq War -- no matter how innocent he actually is.


In 2003, the Iraq War -- or the latest phase -- started with the US-led invasion.  This was followed by the occupation which continues to this day.  In all this time, the US government has not punished anyone connected to the Iraq War.


The public has.  They punished by Bully Boy Bush in 2008 by electing generic Democrat.  Who was on the ticket didn't matter.  The public had turned on the Iraq War and whomever got the nomination -- possibly even Zell Miller -- would hve gotten the presidency so long as they were a Democrat.  It was a repudiation of Bully Boy Bush.


He started the illegal war and he had a lot of help.


Hillary Clinton was one of his helpers.  A lot's forgotten today.  That includes that Senator Bob Grahm urged her to read an intelligence finding -- that rejected the spin -- and that she refused to do so.  This refusal to do due diligence -- a term attorney Clinton was very familiar with -- was ignored by her in real time and since -- she has repeatedly insisted that she looked at everything before voting.  Liar.  She went on to vote for the Iraq War -- the one thing that many still remember.  Besides her refusal to read the intelligence finding Bob recommended, also forgotten is that it was not just a vote.  Hillary also took the media to promote the Iraq War.  It's a detail we're all supposed to forget and ignore.


Now she wasn't the only Democrat to do so.  Every Democrat in the Senate at that time who has made it onto the Democratic presidential ticket also voted for the Iraq War -- John Kerry, John Edwards, Joe Biden . . .


But contrast her with Grabby Hands John Edwards.  John has little to no integrity.  Yet he managed to take accountability for his vote.  He owned his vote for the illegal war and he apologized for it.  As his then-wife Elizabeth Edwards noted (to Ruth Conniff of THE PROGRESSIVE, among others), Hillary did not.  Hillary made excuses and minimized her actions.


The public punished her.  In 2008, she lost the Democratic Party's presidential nomination.  (I believe, had she been elected president in 2008, Iraq would not be an ongoing war.  No one worshipped Hillary at that time.  People were pragmatic about her.  They would have held her feet to the fire.  They wouldn't have looked the other way or held their tongues.)  In 2016, her 'apology' had evolved from it was a mistake to vote for the war to it was a mistake because she believed Bully Boy Bush and she believed he would send enough troops (there are never enough troops for the War Hungry Hillary).  In other words, "I made a mistake, because despite being in the US Senate, I was too damn stupid to know Bully Boy Bush was a liar.  The whole Democratic Party already knew that but I was so damn stupid, I didn't know it.  Vote for me!"


She lost the presidency.


There are one million and one conspiracies for why she lost.  Then there is reality.  Noting a Tweet Mike's noted earlier this week:

.@RahmEmanuel: "I don't think you can make it to the Oval Office without being a good politician. And whatever you want to say-and I am in violent disagreement with this president-he was a better politician than Hillary." #AxeFiles on @CNN
3,632 replies670 retweets2,873 likes


Exactly.  The 2008 campaign presented Hillary as a fighter.  The 2016 presented her as some credit agency collecting on a debt.  She felt she was owed it and it came across.  One of the worst presidential campaign slogans has to be "I'm With Her!"

Were we trying to get into a club?

Eight years later, I'm with her?

She ran her campaign as though the country owed her the presidency and all she had to do was show up for the coronation.


It was not a winning strategy.  Possibly, having gotten the nomination in 2016, she thought she could escape her past and that it was all behind her.  It wasn't.  And how stupid of the party to have backed her in 2016.  This is the woman who the 2008 battle for the nomination saw dubbed a racist -- both she and Bill were dubbed a racist.  She was said to have called for the assassination of Barack at one point -- remember crazy Keith Olbermann and Marjorie Cohn and their breathless commentaries?  So eight years later, this woman that a good portion of the party accepted was a racist was going to walk away with the presidency?


Some like to insist she got the most popular votes?


And?  What does that matter?


As a Democrat, are we supposed to look for the consolation prize because I sort of thought winning the election was what we were after.


The electoral college determines the outcome.  That has always been the case.  That is the system we have.  Don't like it?  I don't.  And I've called it out repeatedly.  I think it needs to be done away with.  But there's no move to do away with it, no serious move so we had it and we'll have it in the future unless/until people wise up and say, "Let's elect by popular vote!"


Rahm's right, she was a lousy candidte.  Donald Trump was a better candidate.  (Which is why I was able to say in September 2016 that he would be the next president.)


Iraq is a big part of Hillary's legacy, of who she is.  If she's stupid enough to run in 2020, she better be smart enough to figure out an explanation regarding Iraq -- and, no, Bully Boy Bush outsmarted me -- that's not going to cut it, not unless she's planning to run on the I Might Be Smarter Than A Turnip platform.


The Myth of St. Barack allowed Barack to take the 2008 nomination.


He utilized sexism against Hillary and so did his campaign staff (including the hideous groping of the cut out).  The press helped him out with that.  They also helped him lie about his Iraq War stance.  Bill Clinton got it right, Barack's whole stance was a fairy tale.

Let's drop back to the January 9, 2008 snapshot when Matthew Rothschild, then still posing as a Democrat publicly, felt the need to lash out at Bill Clinton for rightly noting the little tyke's Iraq reputation was a "fairy tale:"


He opposed the war in Iraq, and spoke against it during a rally in Chicago in the fall of 2002. He said then that he saw no evidence that Iraq had unconventional weapons that posed a threat, or of any link between Saddam Hussein and Al Qaeda.
In a recent interview, he declined to criticize Senators Kerry and Edwards for voting to authorize the war, although he said he would not have done the same based on the information he had at the time.

"But, I'm not privy to Senate intelligence reports," Mr. Obama said. "What would I have done? I don't know. What I know is that from my vantage point the case was not made."


What would I have done?


That was a far cry from the pretense of big strong Barack.  And it's what Elaine and I encountered when Barack was running for the Senate.  I do get The Myth of St. Barack.  Elaine and I were invited to a fundraiser.  I made a point to travel to Chicago just for that fundraiser.  We were going to max out with our donations.  I was fully on board with an anti-war candidate -- even better, a bi-racial person.  And bi-racial was how he was billed back then.  Did that matter?  Yes, it did.  Our country has many bi and multi-racial people.  The Census had been dragged and pulled into that reality only a little bit before.  Democraphic studies would tell you that this too-often overlooked population was actually going to be the dominant one in the near future barring any kind of major trend reversal.


So we meet Barack, not yet in the US Senate, but having givn his 'anti-war' speech.  And he tells us that if elected he's not going to push the end the war, that no longer matters, he explains, because the US is on the ground in Iraq.


So it can't be reversed.


Well that certainly explains why he was unable to end the Iraq War, doesn't it?  In 2011, he did a drawdown, not a withdrawal.  The US military repeated referred to it as a drawdown because that's what it was.  As Ted Koppel reported in real time, a large number of US troops would be moved over to neighboring Kuwait and a number of US troops (including Speical-Ops) would remain in Iraq after the drawdown.


Not only did they remain, he sent more in.


This should have been big news.  And after Tim's report, what happened?  Three debates, three presidential debates.  Not once did the moderator (or the idiot Mitt Romney) ever bring this up.  Barack showed up at the debates with the lie that he ended the Iraq War.  Along with having killed Osama Bin Laden (our mouser president!), his claim to fame was ending the Iraq War.  Those October debates should have addressed what Tim Arango reported.


As John Stauber has noted repeatedly, Barack didn't push for any investigation into lying the American people into war.

Toxic Sludge Is Good For You! Retweeted CounterPunch
#Obama's biggest crime? Covering up #WeaponsOfMassDeception bipartisan propaganda campaign that launched war in Iraq. 14 years later this...https://twitter.com/natcounterpunch/status/884495588506517504 …
Toxic Sludge Is Good For You! added,
CounterPunchVerified account @NatCounterPunch
The devastation in Mosul is huge: the closer one gets to its centre, the greater the destruction from airstrikes. https://www.counterpunch.org/2017/07/10/the-recapture-of-mosul/ …
1 reply 4 retweets 3 likes

.#Obama guaranteed it, no #Chilcot type investigation of the bipartisan stampede to war in Iraq:https://www.counterpunch.org/2016/07/07/wheres-the-us-chilcot-report-blame-obama-hillary-biden-and-kerry/ …
6:09 PM - 10 Jul 2017


He didn't put the illegal war on trial.  He did nothing.  (Nancy Pelosi didn't either, in fairness to Barack.)


But at last, someone might be put on trial for the Iraq War.


It's something Hillary, Barack and so many others can agree on.  In fact, here's a Tweet remembering Hillary's desire to kill Julian:

This from the woman who asked why the USA did not cruise missile an Embassy in the middle off London to kill Julian Assange.??? Stay out of it Hillary.. or stop bitching about others interfering in US politics.. Your credibility is long gone.


Julian Assange, for those who don't know, is the publisher of WIKILEAKS.  He used to have some strong legal support but Michael Ratner died and George keeps Amal Clooney on a short leash.


Julian shamed the US government.  How did he do that?  By exposing the lies.


When Julian exposed the US government lies about the Iraq War, he became a target and he's been one ever since.


He is persecuted.  Ecuador is trying to shove him out of the embassy and into the handcuffs of the United States.


Julian is guilty of no crime -- putting the truth out in the public square is not a crime -- certainly not in what's supposed to be a democracy.


But the US wants to get their hands on him and disappear him.


If they have their way, he will be the only one the US government has gone after, prosecuted for the Iraq War. 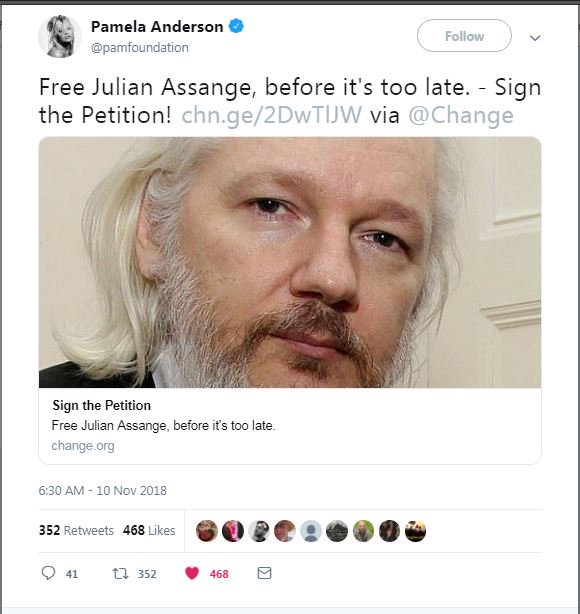 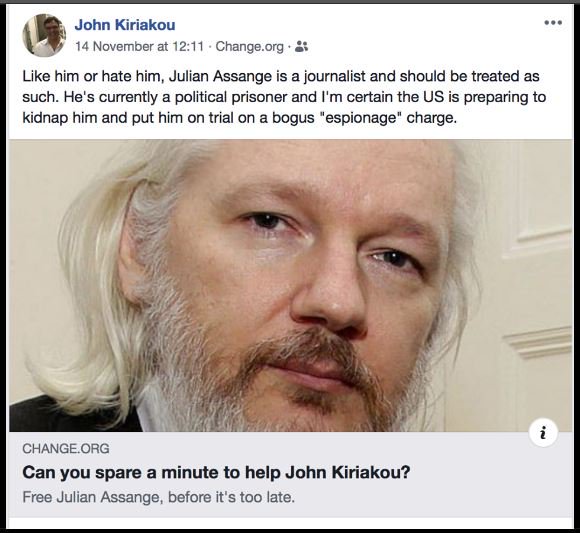 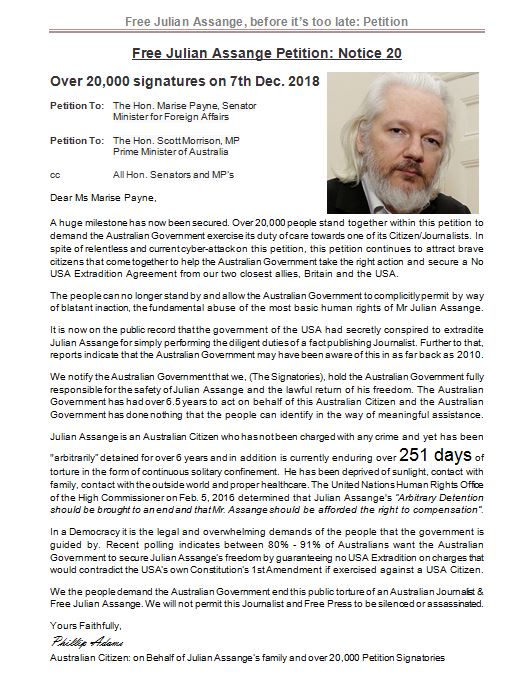 WHAT ABOUT #JulianAssange you freaking #Hypocrites ???? #Unity4J If you truly cared about journalists and free speech you’d be screaming at the top of your lungs for Julian and #WikiLeaks The game is over. You’re all going down!