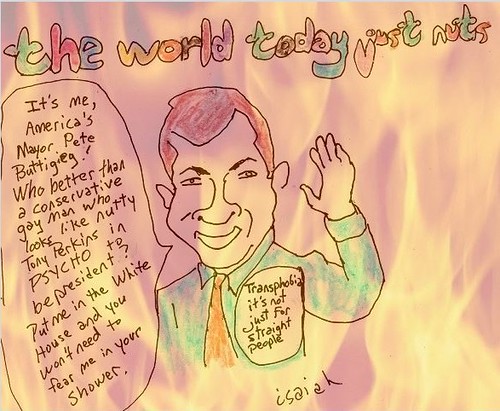 Isaiah's latest THE WORLD TODAY JUST NUTS "America's Mayor."  Wearing a button that reads: "Transphobia it's not just for straight people," Pete Buttigieg declares, "It's me, America's mayor Pete Buttigieg!  Who better than a conservative gay man who looks like nutty Tony Perkins in PSYCHO to be president.  Put me in the White House and you won't need to fear me in your shower."  This is one of three comics Isaiah done over the last few nights.  The other two are "Beto's running" and "Real Issues."   Isaiah archives his comics at THE WORLD TODAY JUST NUTS.
Posted by Common Ills at 5:00 PM