Friday, March 15, 2019.  Iraq gets a little attention from the US Congress, Beto's running and more.


US General Joseph Dunford, who is the Chair of the Joint Chiefs of Staff, made his "fourth and final appearance" before the Senate Armed Services Committee on Thursday "in support of the Department's annual budget request."  Also appearing before the Committee was Acting Secretary of Defense Patrick M. Shanahan.  The topic was the Defense Dept's budget


In his written statement, Dunford noted the following:

Iraq and Syria. U.S. troops remain engaged in the D-ISIS campaign. As the campaign transitions from clearing ISIS-held territory to a focus on stabilizing the region, activities such as training local security forces, enabling local governance, and conducting counterterrorism operations will help prevent a power vacuum in Northeast Syria and a resurgence of ISIS. We are working with our Coalition partners to ensure we meet Turkish security concerns as well as protect those that fought with us against ISIS.

Wow. How novel.  How new.  Year after year, this is the same cycle.  Oh, now we're just clearing and holding.  Let's train.

What is this?  War or a shampoo?  Rinse and repeat?

How many years is the Iraq War going to drag on?  This is about the sixth time that the US government has declared we just need to train forces.  How many times are they going to be trained?

"Insanity is doing the same thing over and over," said Senator Martha McSally but she wasn't talking about Iraq.  She was talking about "blue on blue crimes" -- assault within in the military.


Senator Martha McSally:  In 2017, there were 6,769 sexual assaults reported across our entire military, likely thousands of others that were not reported.  These blue on blue crimes are unacceptable.  They're harming our warriors and they're degrading good order and discipline and military readiness.  Many steps have been taken by the military over the last years and this body -- over a hundred legislative actions. But it's not enough.  There are thousands of our warriors and military readiness that have been harmed by these crimes.  I believe commanders must be educated, equipped and held accountable and still be responsible for the decisions, the culture and the discipline regarding sexual assault. However, something needs to change. Insanity is doing the same thing over and over again and expecting  a different result.  Perhaps we need to take a fresh look at this issue.  I've spent a lot of time thinking about this and more so over the last week.  We have weeks now before the NDAA will be marked up before this committee.  I am fully locked on like a missile on this target.  And I want to be working with you and the military services to take a fresh look at this.  I've asked the Secretary of the Air Force and the Chief of Staff to start with a summit at the Air Force but it's not just the Air Force, it's across our military forces.  So can I get your commitment that we are going to partner on this and we are going to take a fresh look and tackle this over the next forty-five days together?  Which includes being responsive to my questions and maybe forming a team of experts and resources to be able to really dial in as to what's working, what's not working, across the spectrum of prevention and in response and prosecution? And we can tackle this together, come up with some ideas and impact on the NDAA, culminating with a Tank meeting with all the leaders there including myself  and solve this thing together?  Can I get your commitment you'll work with me on that?


Acting Secretary of Defense Patrick M. Shanahan:  Senator, you have my commitment.

Senator Martha McSally:  Okay, great. Let's follow up immediately on that.  I appreciate it.


Senator Elizabeth Warren questioned the increase in the budget and we'll note that in another snapshot, including her statement that the budget was establishing  "a slush fund to hide what's happening with Defense spending."  Back to Iraq, AL-MONITOR notes:

Testifying before Congress today, Chairman of the Joint Chiefs of Staff Joseph Dunford said the Pentagon’s proposed 2020 budget will support an “enduring presence” of US troops in Iraq that’s “slightly less than the forces that are on the ground right now.”

Why it matters: The comments from Marine Gen. Dunford, the US military’s top officer, indicate the US plans to let Iraqi forces carry a larger load in the future as they clean up the remnants of the Islamic State (IS), which appears set to morph into an insurgency.
But that doesn’t appear to gel with President Donald Trump’s remarks last month that the United States would keep troops at Iraq’s Al Asad Air Base to “watch” Iran. Those comments sparked a firestorm in Iraq, where US troops are stationed at the invitation of the government in Baghdad. Dunford said in a prepared statement that the United States plans on “leveraging a relatively small footprint of US forces to enable local partners throughout the world.”


When do the training wheels come off? 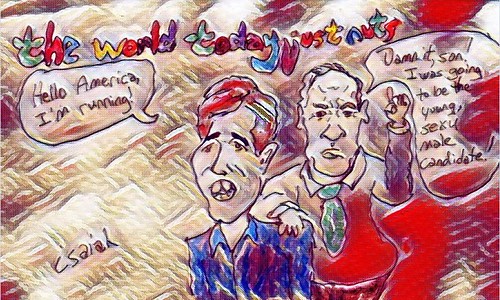 That's Isaiah's THE WORLD TODAY JUST NUTS "Beto's running" which went up yesterday and, yes, former US House Rep Beto O'Rourke announced he is seeking the Democratic Party's presidential nomination.  From an overview of his stands put together by PBS' THE NEWSHOUR (Trina noted it in "Beto"), we'll note this:


I'm not anti-Beto.  He impressed me in Congress, we noted him in coverage of many hearings.  But I am not impressed with that nonsense.  He is a former member of Congress and he now wants to be president but he can't figure out a clear position on these issues?  What about Iraq?  These are issues he should have figured out before deciding to run.


At PRI,  Ori Swed and Thomas Crosbie shine a light on the hidden world of US forces in Iraq that are private contractors:

In 2016, 1 in 4 US armed personnel in Iraq and Afghanistan was a private contractor. This means that the war is already being outsourced, yet scholars, the media and the general public know almost nothing about it.
Because contractors operate in the shadows, without effective public oversight, they allow policymakers to have their cake and eat it too — by appearing to withdraw, while keeping proxy forces in theater. Who are the contractors who actually execute American policy? Are they equipped to succeed in this important task? What risks is the US asking them to take?
The simple truth is that there is little reliable data about this industry. Without this data, scholars cannot ask even the most basic questions of whether using contractors works better than the alternative, namely military personal or local forces — or, indeed, whether it works at all.
We are researchers who study the privatization of security and its implications. In our study, published on Dec. 5 in Armed Forces & Society, we shed light on some of the aspects of this largely invisible workforce for the first time.
It’s hard to get data about private military contractors, mainly because of the proprietary business secrets. Despite the fact that those companies act as proxies of the state, they are not legally obligated to share information with the public on their actions, organization or labor force.
Given how centrally private military companies feature in American foreign policy debates lately, Americans may assume that their policymakers are working from a detailed understanding of the contractor workforce. After all, the point is to weigh the contractors’ merits against uniformed service members, about whom the public have excellent information.
But this does not appear to be the case. There isn’t a detailed account of the private military industry’s practices, workforce, misconducts or contracts. Noticing this gap, in 2008, Congress instructed the Department of Defense to start collecting data on private security personnel.
However, this data is limited, as security contractors comprise just 10 to 20 percent of DOD contractors in Afghanistan and Iraq. The rest provide mission essential functions, such as engineering, communication and transportation and many others. Those roles take place in conflict areas and place those contractors at similar risk level as the soldiers.

6 women are running for the Democratic Party's presidential nomination: