Kat's Korner: Mavis Staples Live and so much more

Kat: To say that Mavis Staples has done some fine and amazing work in her career is to understate reality.  For me, her finest work was WE'LL NEVER TURN BACK. 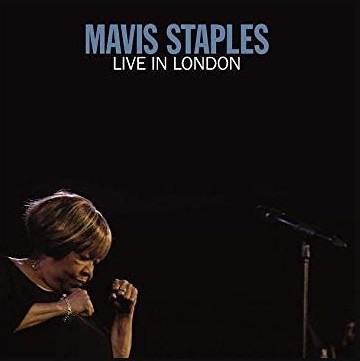 Last month, LIVE IN LONDON was released.  Hard to believe it's only her second solo live album.

LIVE IN LONDON is largely a blues album and it's a great blues album, like Muddy Waters' AT NEWPORT 1960 and Etta James' ETTA JAMES ROCKS THE HOUSE.

The album opens with Ben Harper's "Love And Trust" which she recorded earlier on her studio album LIVIN' ON A HIGH NOTE.  It's a great song, a powerful song.

The simplest things can be the hardest to do
Can't find what you're looking for even when it's looking for you
The judge and the criminal, the sinner and the priest
Got something in common, bring 'em all to their knees
Do what you can, do what you must
Everybody's crying to find some love and trust
I walk the line, I walk it for us
See me out here tryin' to find some love and trust

And so much more powerful live than her studio recording.

Mavis tears into the song and let's you know just what you're in store for on this album.

It's followed by "Who Told You That" which Jeff Tweedy wrote for her 2017 album IF ALL I WAS WAS BLACK.  This song is the call to action, refuting the notion that protest is futile.  "Who told you that?" Mavis asks repeatedly.

And if that doesn't convince you,, check out "Dedicated" (written by Justin Vernon and M. Ward).


I like the live version here which has a lot more space for her to pour life into the song.  It's just a little bit slower than the 2016 studio version -- and the guitar work is as gorgeous as her vocal.

Down the road we walked
Down the road we talked
I remember when
I made war with you
I made peace with you
That's what makes you my friend
And if it's us against the world
Well, I would bet on us


And if "Dedicated" isn't enough to make you purchase the album on streaming or disc, check out "You're Not Alone" (from her 2010 Grammy winning album of the same name, song written by Jeff Tweedy).


This is a powerful album.  And it's one that's pulls together various strands to pack the punch.  A lot of artists have tried to 'say something' in the last years -- especially since the 2016 election.  Most, like Barbra Streisand, have failed hugely.  Why is that?  I keep thinking back to C.I.'s point about John Mulaney and how his KID GORGEOUS special -- including the Trump routine -- succeeded because he was clever.  The others just wanted applause for people agreeing with them.  That's not really art.

LIVE IN LONDON is art and Mavis Staples, at 79, remains one of our most vital artists, as twelve tracks of music (plus a minute of "Happy Birthday") demonstrate.