Monday, June 24, 2019.  Yet again, the press fails to read the room, Joe Biden's in deeper trouble than they admit, another candidate for the Democratic Party's presidential nomination declares, the US will not evacuate contractors in Iraq -- now that the Iraqi government promises to provide even more protection, and much more. 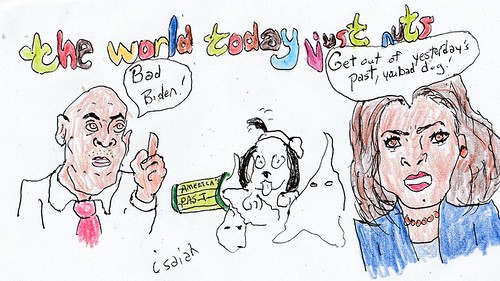 The press appears to misunderstand the event.  So does Bob Somerby.  Joe's latest moment in the negative spotlight is about people seeing him as too close to segregationists because, let's be honest, Joe can't stop boasting about how closely he worked with segregationists.  It's not as though the press was pursuing this topic and it's not as though his campaign hadn't told Joe to stop talking about it.

For Bob Somerby, for example, it has nothing to do with Biden's response to the flair up, it's all about -- you know this is coming -- Al Gore.  Yes, gather round kiddies, as Bob pulls out the big book one more time to tell us that, in the beginning, God created Al and Gore.

Starting in 1987, Phoebe Snow was telling you it's a different world than where you come from -- later Aretha Franklin would sing the same message and still later Terrence Forsythe would join with Boys II Men to make the same point -- somehow it all escaped Bob Somerby.

Bully Boy Bush and company thought they grasped the change.  They were under the impression that reality was what they said it was.  It's the same belief that Joe Biden holds on to.

For Joe, any event is what he says it is.

It's called entitlement and, yes, it's called White privilege and Joe's operated under it his entire life.


And in the 20th century, you pretty much could do that and get away with it.

In fact, when this website started, we had comments.  There's a point, bear with me.  My attitude is always: I've had my say, have your say.  If a journalist wanted to respond here, it's posted as they've written it and that's really that.

But we closed off the comments and did so early on.

Keesha e-mailed shortly after this site started and said she'd prefer it not have the option to comment.  I was confused by the request and we exchanged e-mails on the topic.  She was a women of the left, a person of color and she was tired of not going to websites that were Democratic or left because she'd been ripped apart or someone else had.

You saw that, by the way, take place again last week but not at a website.

Keesha felt (and I agree with her) that she was welcome at this or that site as long as her Blackness or her womanhood didn't conflict with whatever DNC message was currently being sold.  If she raised issues of the way certain policies effected people of color, she would be told -- in very crude terms -- to not talk about it.

When Joe Biden's issue with women first got serious attention, along comes Alyssa Milano telling the world it didn't matter and Joe was friendly with her and blah blah blah.

Last week, along came many people insisting that outrage felt by some people of color over Joe's remarks did not matter.

It's the same thing that was gong on at the various big sites of the early '00s.  They fell from grace for a reason.  They're whores.  That's all they are.  In 2008, they purged Hillary supporters and told the world Hillary was racist, was hoping Barack would be assassinated, was this and was that.  Eight years later, they told their audience to vote for her -- but never explained how she had changed.

Kos-Kos has no ethics.  He just wants to make money off you.  So when the DNC, says X, he repeats X.  He's like a Stalinist in that way.

But the left isn't the left he once thought he could control.  Women of all races and men of color have rejected the top-down control that these people thought they could impose.

And what the press and Bob Somerby are missing is that Joe doesn't get to impose upon others.  In fact, it's Joe that needs them, not the other way around.  Joe Biden holds no public office currently.  He wants to be president but, at present, he's just another former politician.

He needs voters, he needs support.  And telling people that what has upset or bothered them doesn't matter?  That's really not the way to garner support.

But when it's head to head time with Donald Trump in the general election, Donald's not going to back down.  As some idiotic Kos-Kos hisses, "We need to get along!," Donald Trump's not going to say, "Oh, okay, then I won't emphasize this stupid thing that Joe just said."

As history demonstrates, over and over, Joe Biden always says some stupid thing.

His supporters and enablers last week did him no good.  Many people were outraged by his statements.  Bob can quibble over what the wording was.  US House Rep Tulsi can say his rivals are making political hay out of the situation.  None of that matters.

What matters is that people had a serious response to this and they were ignored.  The candidate dismissed them and so much of the opinion shaping public did.  (Which, pay attention, is how you lose the ability to shape opinion.)

Joe Biden already suffered from an enthusiasm gap.  Everything that took place last week only ensured that the enthusiasm gap grew.

The message that's shaping up from Campaign Biden is that Joe's not Donald Trump.

And We The People got that message in 2016 when Hillary campaigned on not being Donald Trump as well.


2015 will lead into 2016.  So is it any surprise that, as the year ends, it appears very likely that the two major party candidates who'll be competing next year will be Hillary and Donald Trump?

What else, honestly, what else could The Year of the Ass produce but a match off between each major party's biggest ass?


That 2020 will offer an ass on the GOP side is a given.  That it will do the same on the Democratic Party side?  It doesn't have to go that way.

But if Biden gets the nomination or if Joe doesn't change real quick, that's what it will be.

Forget everything else from last week except for Joe Biden demanding an apology from Senator Cory Booker.

Do you not grasp how insulting that is?

Sorry, Kos-Kos-ers, this isn't 1992.  Joe's Sista Souljah moment is not going to play his way.  In 2019, we all saw an African-American object, in very nice terms, to the glorification of segregationists and instead of acknowledging that some could find the remarks objectionable, Joe -- an elderly, White man with a lot of money and a lot of power -- demanded that Cory Booker apologize.

Turning to another Joe, Joe Sestak.  The former member of Congress announced yesterday that he was running -- bringing the number of candidates vying for the Democratic Party's presidential nomination to 25.


On his website, Sestak also released a number of policy plans on health care, jobs and economic protections, climate change and environmental protections, and other key issues.

The 67-year-old Sestak is a latecomer in an already-crowded Democratic field — his entry brings the number of candidates to 24 — but said his decision to delay his announcement was because of the return of his daughter’s brain cancer.
The former congressman’s late start means he does not qualify for the first debates in Miami, slated for Wednesday and Thursday. The Democratic National Committee capped the event at 20 participants spread over the two nights.
Sestak served in the House from 2007 to 2011. He defeated longtime Pennsylvania Sen. Arlen Specter in the 2010 Democratic Senate primary after Specter switched from Republican to Democrat, but lost the general election to Republican Pat Toomey. He tried for a rematch with Toomey in 2016 but lost the primary.


Having just declared, it will be awhile before the press can review his policy proposals and sound him out about the issues to form an opinion.  Oh, wait, it's the whorish press.

Dave Weigel‏Verified account @daveweigel 23h23 hours ago
Joe Sestak, a former congressman from Pennsylvania who lost Senate bids in 2010 and 2016, is now running for president. I am serious. He’s in Iowa today. 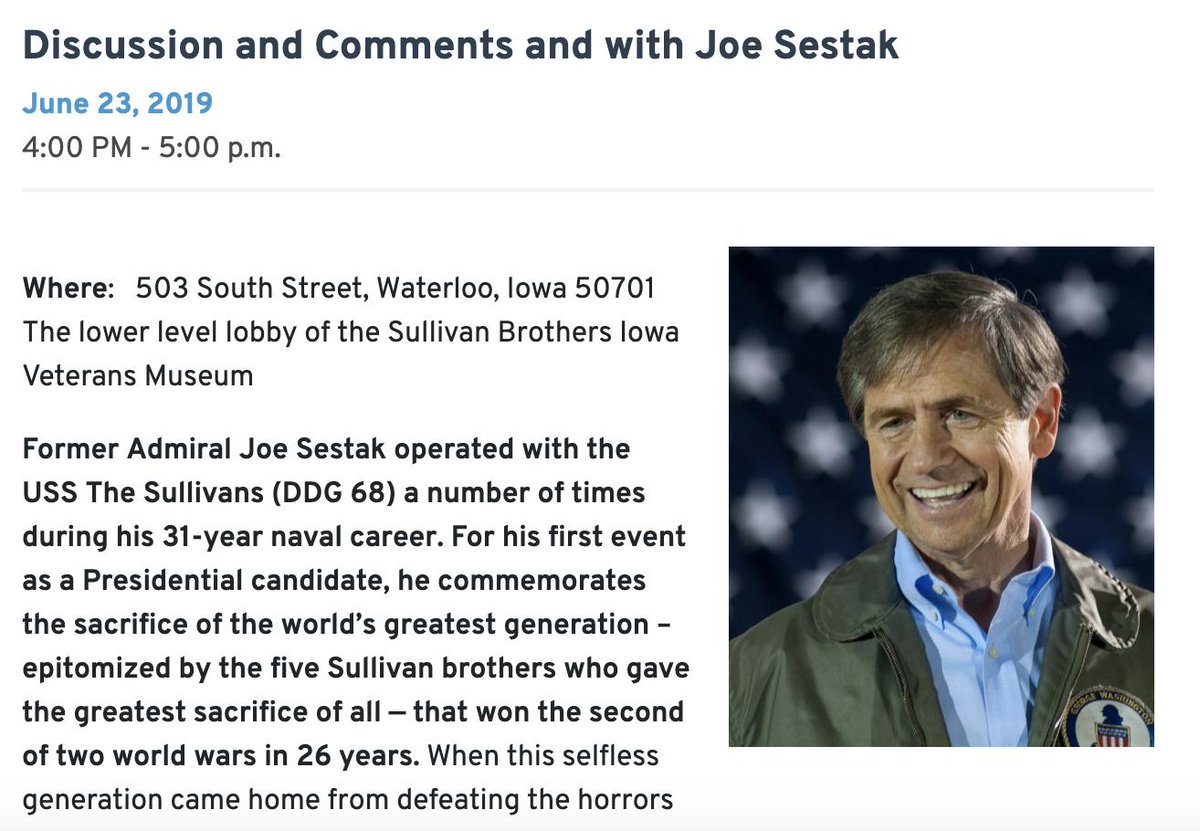 
Is that who he is?  Dave is such trash.  And the incidents Dave mocks him for?  They actually go to independence and strength.  Joe bucked the DNC on both of those races.  The DNC actively worked to see him lose.  Check the record, check the money poured in by the DNC.

But a whore like Dave Weigel never sees a backbone as strength.  Toss a wad of cash through the door of his office and he drops to all fours -- to steal the old joke Joan Rivers used to do about Sophia Loren (only it was a Hershey bar in Joan's joke).


President Trump has said he does not want war but warned Iran it would face "obliteration" if conflict broke out.
Speaking to NBC on Friday, he said the US was open to talks but would not allow Iran to develop nuclear weapons.
He also expanded on his last-minute decision to call off strikes planned in response to the shooting down of a US unmanned drone this week, saying he had been told 150 Iranians would be killed.
"I didn't like it. I didn't think it was proportionate," he said.


Yes, killing civilians in a war started because a drone was shot down would not be "proportionate."


It's a message the ridiculous Secretary of State cannot comprehend.

Secretary Pompeo‏Verified account @SecPompeo
Second, the U.S. has shown beyond any doubt that Iran shot down a U.S. unmanned aircraft in international space and the U.S. is not evacuating personnel from Balad Air Base in Iraq.
3:17 PM - 22 Jun 2019
198 replies1,595 retweets5,814 likes

Why is War Pom Poms weighing in?  Maybe because the US does not have a Secretary of Defense currently.


As for not evacuating personnel from Balad Air Base?  We covered that on Saturday:


They were going to get the contractors out but now they're not.  Because?  More security is being provided for the base.  Qassim Abdul-Zahra (AP) reports, "Security measures have been increased at Balad Air Base in Iraq, which houses U.S. Air Force trainers and associated U.S. contractors, following a mortar attack last week, a top Iraqi air force commander said Saturday."  Remember, the Iraqi installed government is a puppet government which works for the US government.  They've demonstrated that yet again.  Some mortar attacks that result in no deaths results in beefed up security.  But when attacks result in the deaths of Iraqis?  The Iraqi government's not so concerned.

Several people have been killed in a blast at a Shia Muslim mosque in Iraq's capital, Baghdad, according to police and security sources.
The explosion hit the Imam Mahdi al-Muntadhar mosque in Baladiyat neighbourhood during Friday prayers, near the massive and densely-populated district of Sadr City.
The attacker was wearing an explosive-laden belt targetting the mosque, Police Captain Ahmed Khalaf told Anadolu Agency.

He said 10 people were killed and dozens wounded, while other news agencies' reports quoting unidentified security sources put the death toll to at least seven.

The Iraqi government makes a decision to beef up the protection of . . . the base where the US fores are.

The Iraq War was a war that should have never happened.  It continues to this day.  It's amazing that we tell children to finish their vegetables before they start their dessert but we never tell War Hawks to finish their ongoing wars before starting new ones.

Witness - Al Jazeera‏Verified account @AJWitness 6h6 hours ago
An Iraqi medic visits his old hospital, only to find it completely destroyed by the war. Nowhere to Hide: Iraq's Emergency Room - http://aje.io/flr59
/>
0:50
41.6K views
"This is where I used to sit." | Iraq: Nowhere to Hide
12 replies144 retweets231 likes


Iraq is destroyed.  And yet the same people who supported the Iraq War now want to argue for a war on Iran.