Wednesday, June 26, 2019.  Ten candidates prepare to take the stage tonight for a debate.  Will the moderators do the job the country needs or will they clown like corporate whores?

It’s Debate Eve! I’m excited to hit the stage tomorrow, June 26 at 9 p.m. ET. I can’t wait to share with you my vision for a more just and fair nation. 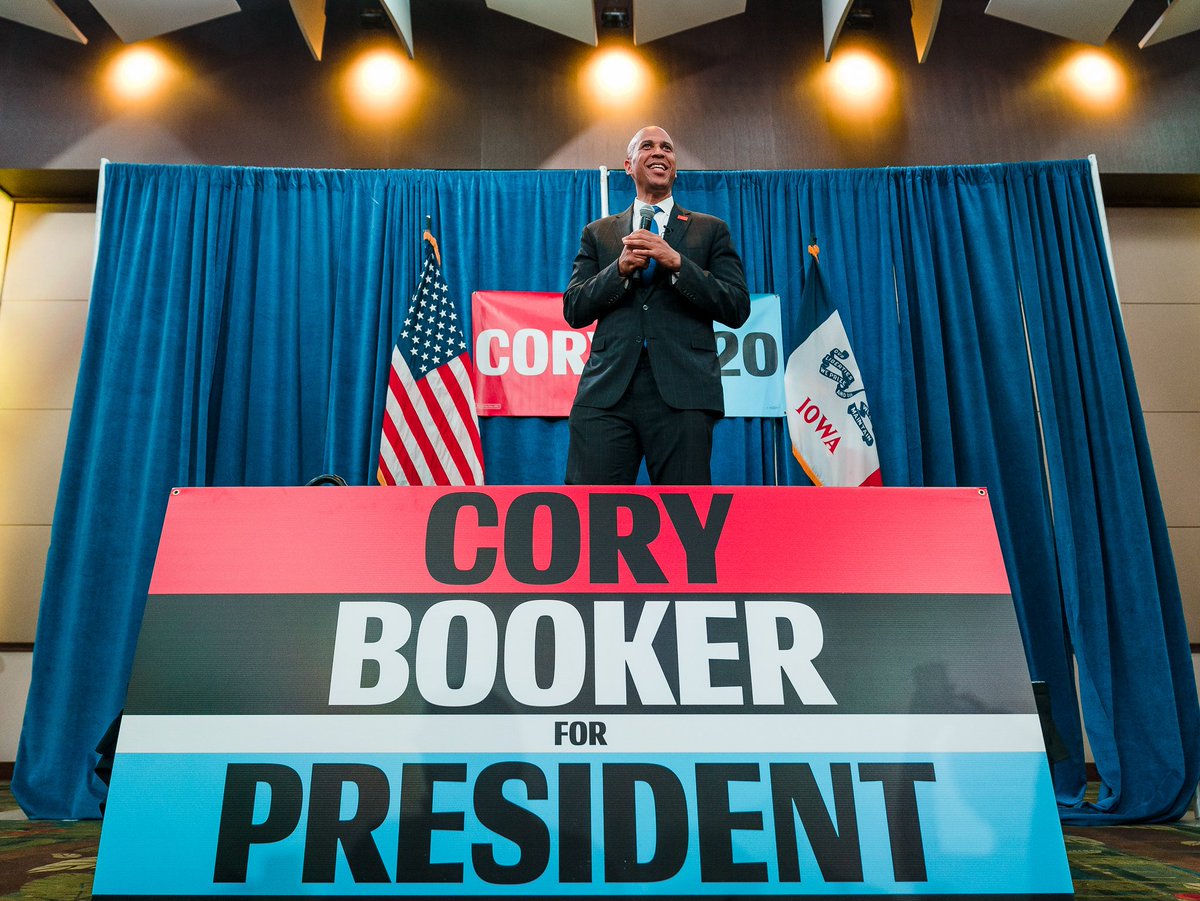 The debate kicks off at 9:00 pm EST and will air live on NBC, on MSNBC and on TELEMUNDO.


As important issues could be determined by this election -- never-ending wars, the health of our earth, unemployment, the consolidation of money and power, healthcare, etc -- eyes will be not just on the candidates but on the moderators as well.  Are they asking questions that address the issues the country is facing?  Are they conducting themselves in an appropriate manner or are they, yet again, just clowning?

There are real issues that need to be addressed and, tonight, five members of the media have the power to do that.

The ten on stage are running to become president.  That means the questions should rise to that level.  What would they do?  How would they do it?

There's no need to pretend this is THE VIEW or an MSNBC talk show -- meaning, no 'hot topics.'  Stick with the realities that Americans are living with and how these ten candidates plan to address these issues.

Rachel Maddow has become the least trusted personality on MSNBC and she probably shouldn't have been included in the moderators for that reason alone.  Her chasing of ghosts and gossip has ruined her image.  But the higher ups are convinced this is the perfect opportunity for Rachel to restore her image.  For that reason alone, you should keep an eye on her -- does she rise to the occasion or simply glory hog it yet again like the buffoon she's become?

Chuck Todd's big issue?  Can he listen?  The moderators, like the candidates, should be able to think on their feet.  That means actually listening and having follow ups that clarify what the candidate is saying.  Just showing up with a list of prepared questions will not suffice.

Todd and Maddow are the two with the most to lose.  But no one's expecting a Candy Crowley from either -- a performance so awful and incompetent that it ends a broadcasting career.  (For those who missed it, Candy now spends her time eating, reTweeting blow job Tweets, eating, desperately seeking employment anywhere -- will moderate anything! -- and eating.  It's a glorious retirement following her glorious career.)

Among the candidates tonight, the one with the most to lose is Senator Elizabeth Warren.  Of the ten, she is the press favorite and the press has spent the last few weeks attempting to rehab Warren and make her more 'electable' -- whatever that means.  The only one who can woo voters is Elizabeth herself.  Her image going into the debates is that of someone who can give a speech but, as demonstrated in interviews, someone who stumbles when moving away from pre-crafted statements into the area of semi-spontaneous remarks.

Impeaching Trump is not really a presidential debate issue.  It's a matter for the House of Representatives.  What the candidates on the stage need to do is to demonstrate who they are and what they would do as president.

But impeachment is just the sort of junk issue that Rachel brings with her and why her show has tanked in the ratings.  POLITICO reported yesterday:

Democratic campaign officials had a warning for lawmakers Tuesday: Voters think they’re too focused on impeachment and instead want to hear more about their legislative agenda.
Likely voters in 57 battleground districts say the Democratic caucus' aggressive policy agenda hasn't broken through the noise emanating from Washington, according to polling conducted for the Democrats' campaign arm.  Rathr, voters view Democrats as preoccupied by impeachment.


This is a presidential debate.  What would you do as president?  No one on that stage can answer that, as president, they would impeach Donald Trump because the president doesn't have that power.

The president does have the power to bring troops home, for example.  So the ongoing wars better be part of the conversation.

And every time Elizabeth Warren promises another give away -- You get free education! You get free healthcare! You get free prescriptions! -- she better be asked how she'll pay for it.  You can't continue these never-ending wars and also pay for what the country needs.

In a perfect world, all five moderators would have the US government's budget in front of them and refer repeatedly to the financial costs of these ongoing wars.  This is America's VISA bill that no one wants to open.  We keep saying we'll send in a payment next month.  And the bill keeps mounting.  It's already effecting our finances and that will only be more true in the coming future.

For the Trump obsessed among the moderators, they can talk Trump by addressing real issues, like immigration.

As his administration refuses to follow our laws -- preventing refugees from presenting themselves for asylum at our ports of entry -- they cause families to cross between ports, ensuring greater suffering & death. At the expense of our humanity, not to the benefit of our safety.
227 replies1,338 retweets6,465 likes

Trump obsessed?  This is a debate among Democrats.  It would be wonderful if for one two hour political event, the focus could be on them and what they would do as president.  I don't think anyone in America is confused as to what Donald Trump would do and has done.  (Some like it, some don't, some are indifferent.)  Cory Booker's got a vision for "a more just and fair nation" (see Tweet at the top of this snapshot).  I want to hear about that and assume many Americans would love to as well.


It would be wonderful if the Democrats could use their time on the stage not to rehash what is but to illuminate what can be.

Amy Klobuchar appears ready and able to do that.

Here it is: a plan for my first 100 days as President of the United States. The urgent problems our country is facing require immediate action and bold solutions, and I plan to get to work delivering results on Day One.
220 replies500 retweets1,302 likes

She's got a plan already for her first 100 days if elected president.  Seems like the moderators should be reviewing that and asking questions about that.

Another issue to address?  Education.

War in the wide range shot and in the close up.

Jay Inslee says he has a plan.


That issue alone would effect our climate, our economy, our ongoing wars and much more.  Seems like it should be a major topic in the debate tonight.

I don't know what -- if anything -- of value Bill de Blasio brings.  His Twitter's filled with boasts about what he's done with NYC -- boasts most Dems in NYC would disagree with and then nonsense.

Lucky to have the talented, debater Dante de Blasio helping me get ready for Wednesday!

Are you running to replace Stephen Colbert as the host of a late night talk show or are you running to try to become president?  It's really hard to tell with that sort of nonsense combined with your already questionable 'achievements.'

It's true there are a lot of Democratic candidates running for president. But I'm the only candidate leading a movement to change our food quality and improve the health of our nation.
2 replies12 retweets35 likes


It's not 'sexy' but it is a real issue.  (And for the record, Marianne Williamson is running for the nomination as well and she's addressed this topic repeatedly.  Tim's wrong when he claims he's the only one.)

Last weekend, I visited a mobile home park in Iowa where residents are fighting a steep rent hike and, like so many folks across the country, are struggling. This is one of the reasons I put forward a plan to address housing challenges head-on. http://bit.ly/JChousingPlan
/>

That issue could really spark a discussion.  Along with Julian, Elizabeth Warren and Tulsi Gabbard have discussed this issue.  Tulsi met, for example, with first responders in California who aren't able to live in some of the areas that they were protecting from the fires due to the fact that the rent and the homes are so costly.  Some have argued tiny home communities might be one answer.  Rent control is also an option to consider.  There are many options and it would be great for America to hear what Julian, Elizabeth, Tulsi and the rest are supporting and what they envision.

Rising sea levels hit Miami, floods wipe out towns in the Midwest and fires devastate California. What's the common cause? Climate change. We have to act now.
0 replies5 retweets14 likes

When antitrust regulators let giant corporations put profits over workers & consumers, this is what happens. Disney is on track to make $9 BILLION at the box office in 2019. CEO Bob Iger took home $65.7M last year. And workers are facing layoffs.
194 replies1,210 retweets2,903 likes

That's not from Elizabeth's campaign feed, it's from her feed as a US Senator.  Going through all of her campaign Tweets this morning was depressing as hell.

Does no one advise her on her staff?

First bit of advice should be, stop finger pointing!

She's not overseeing TARP here.  (Or, to be frank, overseeing it badly.)  She's supposed to be showing leadership.

That requires going beyond finger pointing.

I believe we all know the mess we're in.  How are you going to get us out of that mess?

Every time she speaks, every time she (or her campaign) Tweets, that should be the message.  That it's not been the message is part of the reason she's struggled so long and so hard.

In some Democratic circles, there is a feeling among some women that we have to consolidate around Elizabeth because she's the one with the best chance.

I haven't decided who I am supporting.  But it will be someone who proposes real solutions and demonstrates real leadership.  I'm not interested in whomever we think right now might be electable in a year.  It's bad enough that we're told to hold our nose in the general election but to be told that in the primary as well?

And it wouldn't necessarily require holding my nose to vote for Elizabeth.  All it would require would be for her to stop telling the world who did the wrong and start emphasizing how we can fix things.  That's what a leader does -- brings the country together and addresses the issues that need addressing.

That's the only reason Joe Biden's held on to his lead thus far.  He's offering nothing in his remarks other than, I can work with everyone, I can return us to a day when we got along, I can hold hands with anyone, blah blah blah.

Elizabeth doesn't have to go as far as Joe does -- no one should -- but she should be able to explain how a problem gets fixed and make the solution the message.


A serious debate will help all the candidates on stage tonight.  It will help elevate the reputations and images of the moderators.  And it's what the country needs.

We'll have to wait and see if that's what gets delivered tonight.