Wednesday, February 19, 2020.  Some Democratic Party presidential candidates prepare to take the debate stage tonight (Tulsi Gabbard and Tom Steyer are not invited but Republican Michael Bloomberg is), Fahd al-Khazali becomes the latest protester killed in Iraq for the 'crime' of calling for an end to corruption and much more.


In the US, as the race for the Democratic Party's presidential nomination continues, six candidates prepare to debate tonight in Nevada.   Moderating will be NBC's Lester Holt, Chuckie Todd and Hallie Jackson and TELEMUNDO's Vanessa Hauc and THE NEVADA INDEPENDENT's Jon Ralston.

You can be sure that Chuckie and all the rest will avoid asking the most important question of all: "Michael Bloomberg, where do you get off thinking you can treat America like your whore and buy her?"

That is what the billionaire is trying to do.  The DNC is happy to let him.

Along with Michael Bloomberg, these five will be on the stage: Bernie Sanders the front runner, the tanking Joe Biden, Senator Amy Klobuchar, Mayor Pete Buttigeg and Senator Elizabeth Warren.  NBC, MSNBC and TELEMUNDO will carry the debate over the airwaves and you can also stream live at either's site.

It will be a shock for many exposed to Bloomberg via those annoying commercials.

Bloomberg's proven to be very, very stupid.  Yes, the advertising has bought him name recognition.  They haven't bought him voice recognition, have they?

He's got a squeaky, little voice and speaks in a regional accent.  All that advertising could have been used to expose America to his voice.  Instead, they've relied on celebrities (Judge Judy, John Mellencamp, Barack Obama, etc) and narrators with non-regional accents.  People watching tonight may finally get to hear the pursed speaking manner of Michael.

He's a do nothing buying his way onto the stage.  He has no qualifications to be president.  Mayor?  Even Pete can point to more than just being a mayor.  Bloomberg would probably love it if you thought he was "America's mayor."  The press bestowed that tile on Rudy Giuliani, not Michael Bloomberg.

Michael didn't bring a city together.  Instead, he used racist tactics to further divide NYC and his time in office was noted for its attacks on minorities and its spying on Americans.

Bloomberg's running because the American people want Bernie Sanders and allowing the American people a say in their government is something Michael Bloomberg cannot and will not tolerate.  So he shows up prepared to spend as much as it takes to defeat Bernie.

Sal Albanese‏Verified account @SalAlbaneseNYC 9h9 hours ago
To Bloomberg, government and policy are too important to be left to the people. https://slate.com/news-and-politics/2020/02/michael-bloomberg-2020-democratic-campaign.html …. A provocative piece which speaks to my main concern re @MikeBloomberg’s candidacy, a further erosion of what’s left of our democracy
27 replies192 retweets724 likes


This is the man who finds out a woman working for him is pregnant and tells her, "Kill it!"  Bloomberg repeatedly made sexist statements and denied equality and fairness in the work place.  Laura Bassett (GQ) noted last week:

In December 2015, employees at Everytown for Gun Safety, the gun control organization funded by Mike Bloomberg, arrived at work to find a holiday gift on their desks from their employer: the former mayor’s 1997 autobiography, Bloomberg by Bloomberg. Flipping through the book, staffers found themselves uncomfortably reading their billionaire founder’s boasts about keeping “a girlfriend in every city” and other womanizing exploits as a Wall Street up-and-comer.
“A few people started immediately going through it and sending the cringe-iest parts around on email chains,” one former Everytown employee told me. “Hardly the most controversial things he’s said, but it’s still a bad look.”
Indeed, Bloomberg’s casual boasts about his sex life in his own autobiography are now some of the least problematic parts of the his candidacy for president. In recent days, the former New York City mayor’s track record on race is undergoing renewed scrutiny: Bloomberg oversaw and expanded the racist and unconstitutional “stop and frisk” program, and a newly unearthed video shows him blaming the end of a racially discriminatory housing practice known as “redlining” for the 2008 economic recession. But it takes a telling amount of gall and cluelessness to gift a book with anecdotes about your own womanizing to employees at your gun safety non-profit in the year 2015, especially for a politician with presidential ambitions who has been vigorously denying allegations of misogyny throughout his entire career—including nearly 40 sex discrimination and sexual harassment lawsuits brought against him and his organizations by 64 women over the past several decades.
Bloomberg’s sexism, like that of fellow New York City billionaire Donald Trump, has been prolific and well-documented, but for some reason, the stories about him don’t seem to have taken hold. He is still being embraced by the Democratic establishment as a viable option for its presidential nominee. He surged to third place in several 2020 polls this week; the Democratic National Committee changed its rules to allow him to participate in the next primary debate; House Speaker Nancy Pelosi said his presence in the primary is a “positive one.”
All this, despite what’s already been reported and alleged for decades about Bloomberg’s behavior. As a recap, here are some examples: Sekiko Sakai Garrison, a former sales representative at Bloomberg LP, alleged in a 1997 lawsuit (one of four separate lawsuits in a two-year period) that when then-CEO Mike Bloomberg found out she was pregnant, he told her, “Kill it!” and “Great! Number 16!”—an apparent reference to the number of pregnant women or women on maternity leave at his company. She also alleged that when Bloomberg saw her engagement ring, he commented, “What is the guy dumb and blind? What the hell is he marrying you for?” and that he once pointed to another female employee and told Garrison, “If you looked like that, I’d do you in a second.” Bloomberg denied having said most of those things, but reportedly left Garrison a voicemail saying that if he did say them, he “didn’t mean it.”
Bloomberg once described his life as a single billionaire bachelor in New York City to a reporter as being a “wet dream.” "I like theater, dining and chasing women," he said. On a radio show in 2003, he said that he would “really want to have” Jennifer Lopez, which he later explained away as wanting to “have dinner” with her. A top aide said Bloomberg frequently remarked “nice tits” upon seeing attractive women. Employees of his in 1990 put together an entire booklet of his some of his more egregious comments, including, "If women wanted to be appreciated for their brains, they'd go to the library instead of to Bloomingdale's,” and, of the computer terminal that made him a billionaire, “It will do everything, including give you [oral sex]. I guess that puts a lot of you girls out of business."

Court records reviewed by ABC News indicate that at least 17 women have taken legal action against the company over the past three decades, with three of the cases specifically naming Bloomberg for his role in the company’s culture. None of the cases made it to trial – four were either dismissed or withdrawn, while five were settled out of court. Three cases remain active.
The comments attributed to Bloomberg in court records are echoed in a gift book he received from colleagues in 1990: a compilation of his alleged quotes. The booklet contained alleged comments such as, "Make the customer think he’s getting laid when he’s getting [expletive]," and, “If women wanted to be appreciated for their brains, they’d go to the library instead of to Bloomingdales.” The booklet received media attention a decade later when he ran for mayor of New York.
"The atmosphere was toxic and harassing," said Bonnie Josephs, a New York attorney who represented the woman who alleged that Bloomberg suggested she terminate her pregnancy.


According to the Post, when Bloomberg learned that former salesperson Sekiko Sakai Garrison (who sued the billionaire in the late 1990s) was pregnant in 1995, he reportedly told her to “kill it.” Other employees allegedly overheard the remark, but still, Bloomberg called Garrison shortly after the incident, denying that he’d insinuated she should terminate her pregnancy. Garrison was fired a few months later.


In her lawsuit, Garrison also recalls Bloomberg taking another female employee to task for her pregnancy, responding “what the hell did you do a thing like that for” upon learning the woman was having a baby. In another instance, according to the lawsuit, he allegedly screamed at a woman who was looking for a nanny, “It’s a f**king baby! … All you need is some black who doesn’t have to speak English to rescue it from a burning building.”

This is the man who referred to transgender persons as "it" or "some guy in a dress."

Alphonso David‏Verified account @AlphonsoDavid 9h9 hours ago
Words matter and Mayor @MikeBloomberg should apologize for using language that demoralizes and dehumanizes members of our community. My full statement: 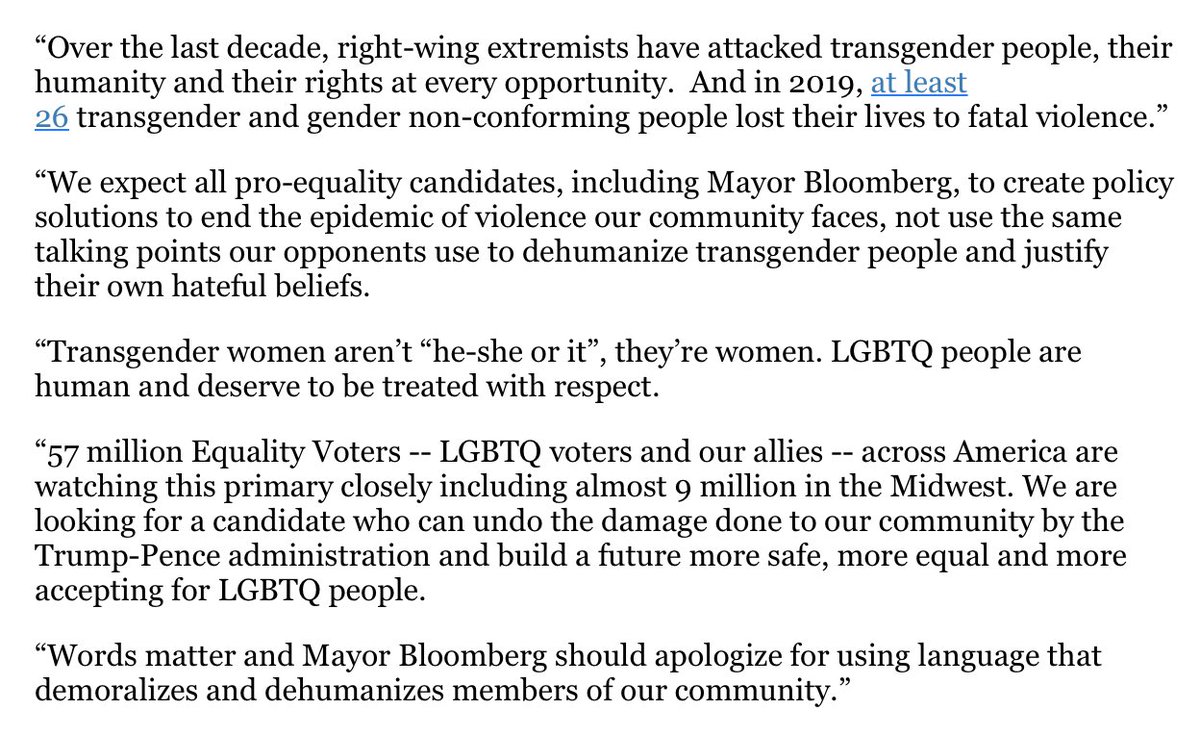 This is the man who stated "Black and Latino men don't know how to behave."


The always ridiculous Paul Brandus serves up "Blacks and Hispanics should not ditch Mike Bloomberg over his 'stop and frisk' mistake" at USA TODAY.  You have to wonder not only about Paul's racism but about USA TODAY's as well?

Forget that it was not a 'mistake' (it was a policy he implemented and oversaw by choice).  How is it acceptable, in the 21st century, to allow White Anglo Paul to tell "Blacks and Hispanics" what they should do?  Maybe it's time Paul sat his tired (and undistinguished) ass down?


Michael Bloomberg hasn't earned the right to be on the stage tonight, let alone to be president of the United States.  What is he?  This century's Meyer Lansky would be a better comparison.


Michael Bloomberg supported the Iraq War -- going so far as to appear the 2004 GOP convention to praise it.  Joe Biden also supported the war.


In Iraq, protests continue.  Also continuing?  The attacks on the protesters.  Another protester has been murdered. 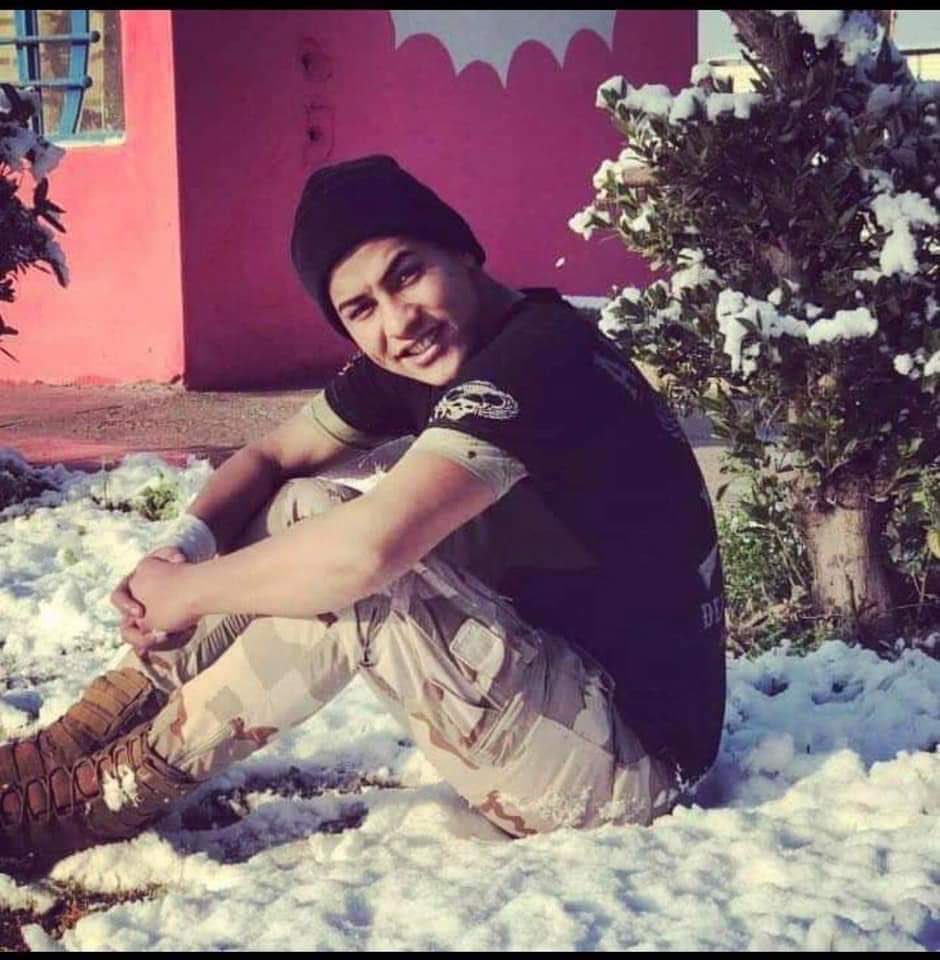 
It's amazing that these months long protests have never once been a topic at any of the Democratic debates so far.  For months, these protests have been going on.  Over 600 protesters have been killed, over 10,000 have been left injured.

The protests take place in the country the US invaded on the claim that they were spreading democracy.

Yet not one moderator has ever raised the issue of these protests.

How is this not a topic for discussion?  Joanne Serrieh (AL ARABIYA) reports:


The damage caused by unidentified men shooting protesters with “hunting rifles” in Iraq has come under the spotlight online, as activists use the hashtag #StopHuntingUs and share graphic photos to draw attention to their wounds.

There have been “credible allegations” of “unidentified armed groups” injuring at least 50 people between February 14 and 16 using “hunting guns” in various areas in Iraq, including the capital Baghdad, according to United Nations Assistance Mission for Iraq (UNAMI). Iraq is home to a number of armed militias, including many within the framework of the Iran-backed Popular Mobilization Units, which have attacked protesters for months.

Sam Dagher‏Verified account @samdagher 4h4 hours ago
“An operation room was formed @AdilAbdAlMahdi was there as supreme commander of all armed forces. Around him sat army & fed police commanders & leaders of Hashed as well as Iranians. They all saw demonstrations as part of larger conspiracy.” #IraqProtests
0 replies3 retweets2 likes