Iran announces it will cut power to Iraq, Iraq's prime minister is threatened and more

Trouble abound for and in Iraq but lazy 'reporters' and 'writers' can't do anything but waste everyone's time talking about pardons from days ago.  Here's news that effects every person in Iraq, REUTERS reports:

Iraq’s capital Baghdad and other cities are at risk of serious power shortages after Iran slashed gas exports, the electricity ministry said on Sunday, potentially placing further pressure on the government of Prime Minister Mustafa al-Kadhimi.

Nine hours ago, Trudy Rubin Tweeted the same Tweet about the pardons seven times.  Seven.  She's covered Iraq in other Tweets with that?  Not one word.  Never agreed with Trudy politically but I did have a little bit of respect for her when she would actually cover Iraq.  Clearly, those days are long gone.

In the real world, a threat has been made on Iraq's prime minister.  Baxtiyar Goran Tweets: 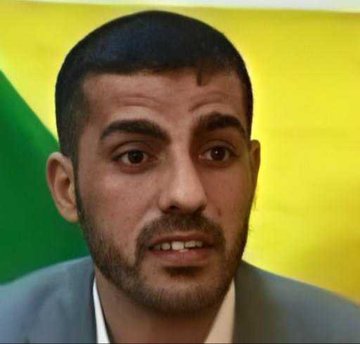 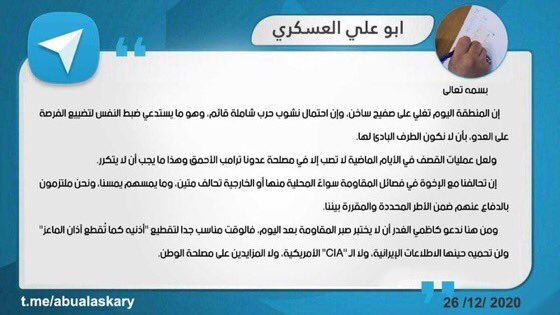 Abu Ali al-Askari, a senior Kataib Hezbollah commander, said in a statement on Twitter that the region is boiling, warning that there is the possibility of a full-blown confrontation between the Iraqi security forces and pro-Iran militias.

Considering him "a traitor", Askari called on PM Kadhimi not to test the patience of the “Resistance” any longer, threatening that the time is appropriate "to cut his ears as the ears of a goat are cut", after which he added, the Iranian Intelligence, the CIA and local hypocrites would be incapable of protecting him.

Iraqi Prime Minister Mustafa al-Kadhimi warned late Friday evening that Iranian-backed militias he described as "outlaw adventurers" would face a "decisive confrontation" from his government if they continue attacks that serve to destabilize national security.

This warning came after the arrest of members of the Asa’ib Ahl al-Haq militia on charges of participating in missile attacks on Baghdad's fortified Green Zone.

According to the Iraqi military, three rockets hit the area on the evening of Dec. 20, causing light damage and no casualties in the most recent of several attacks targeting facilities there in recent weeks.

A document that appeared to be issued by the Iraqi National Intelligence Service warned that a group affiliated with Asa’ib Ahl al-Haq intended to go to the intelligence agency's headquarters in central Baghdad's Karrada neighborhood armed with heavy weapons and demand the release of those arrested. Kurdistan 24 could not verify the authenticity of the document.

Arab media broadcast a video of militiamen loyal to Khazali threatening Friday to resort to violence if the militia member accused of firing the missiles was not released by government forces. The man, Hossam Zerjawi, reportedly was arrested several days ago, along with several accomplices.

Meanwhile, DEFENCE BLOG notes, "The U.S. Air Force, Navy and Marine Corps are on heightened alert and increase patrols over Iraq to respond to a potential Iranian attack at U.S. troops in Middle East region."

While real issues take place in Iraq, US voices waste everyone's time with distraction.  Reporters Without Borders issued the following:

Reporters Without Borders (RSF) condemns a wave of press freedom violations in northern Iraq’s autonomous Kurdistan Region, where at least 10 journalists have been arrested while covering peaceful protests during the past week, one has been placed in pre-trial detention and a regional TV channel, NRT TV, has again been banned. Detained journalists must be freed at once, RSF said.

Covering anti-government protests is becoming increasingly difficult in Iraqi Kurdistan. The latest victims have included Harem Majed, a reporter for the Bazianpress website, who was arrested in Bazian, a town in Soulaymaniyah province, on 9 December while covering a peaceful protest against the high unemployment level and Kurdish political party corruption.

Karzan Tariq and Goran Mohammed, who work for the regional satellite TV channels NRT TV and Payam TV, and two journalists with the national TV channel Al-Iraqiya, reporter Amin Ahmed and cameraman Sirwan Barzan, were held for 24 hours after being arrested on 11 December in the city of Soulaymaniyah, where they were covering protests.

After being arrested while covering protests in Kalar, in Soulaymaniyah province, for Radio Deng on 12 December, Mohammed Mahmod was placed in detention and was threatened with reprisals if he did not abandon his journalistic work.

Rojnews TV reporter Zosk Ballak has been held ever since his arrest on 12 December in Choman, in Erbil province, in connection with two articles he wrote about the recent protests.

Rudaw TV reporter Bakhtyar Kader was covering a protest started by young Iraqis in Ranya, in the northeast of Soulaymaniyah province, on 11 December, when he was attacked by a member of a unit of the Kurdish security forces, known as the Peshmerga, that had been sent to keep an eye on the area.

Three journalists working for Kurdistan24 TV, Dalia Kamal, Hardy Hassan and Barham Jamal, were also briefly arrested on 13 December while interviewing passers-by about their economic situation and difficulties in the current fraught context in Soulaymaniyah.

“Arresting journalists will prevent economic demands from voiced in the region,” said Sabrina Bennoui, the head of RSF’s Middle East desk. “It is essential to allow the population to have access to all the information that is important to them. The Kurdish security forces must stop obstructing the work of journalists and must immediately release those still being held.”

For the third time in recent months, the authorities meanwhile banned NRT TV from broadcasting for a week on 7 December, after security forces stormed into its Soulaymaniyah headquarters and ransacked equipment. NRT TV is run by Shaswar Abdulwahid, who founded the New Generation Movement, an opposition party, in January 2018. Three other TV channels, Payam TV, Speda TV and Rudaw TV, have also been the targets of threats designed to deter them from continuing to cover the protests.

The protests against Iraqi Kurdistan’s autonomous government and main political parties, which erupted in early December in Soulaymaniyah province, have been accompanied by outbreaks of violence and have been dispersed by riot police. Many journalists were arrested during an earlier, major wave of protests in Iraqi Kurdistan in August.

In Iraq, reporters risk their lives to report real news and they are punished for it.  In the US?  A bunch of useless idiots who haven't paid attention to Iraq in years waste a whole week on pardon coverage of an event that the average Iraqi wasn't even an adult when it happened (the median age in Iraq is 20-years-old).  Now they really don't care about the pardons except that Donald Trump issued them.  So they rail and pretend they're covering Iraq and pretend that this one attack was somehow unusual and exceptional and not the norm, they pretend that this one attack wasn't actually representative of what Iraqis lived with daily.

They do a lot of pretending.