Monday, February 8, 20201.  More US troops leave today for Iraq while Joe Biden has no policy to offer on that country but does continue to lie about his own Iraq experience.

Sixty soldiers from the Minnesota National Guard will be deployed to Iraq and Kuwait.

The soldiers from B Company, First General Support Aviation Battalion, 171st Aviation Regiment based in St. Cloud will deploy Monday.

Those troops are leaving today.  Iraq?  It's a country that continues to fail to serve its own citizens.  Sura Ali (RUDAW) reports:

Fresh protests broke out in several provinces across central and southern Iraq over the weekend, with several protesters wounded, activists told Rudaw English on Sunday.

Demonstrations broke out in the southern city of Nasiriyah on Friday. Clashes took place between demonstrators and riot police where three protesters were wounded, local activist Muhammad Khayat, told Rudaw on Sunday.

Protesters blocked the Hadarat Bridge in the city centre before returning to Habboubi Square, the city’s protest hotspot that has witnessed some of the bloodiest crackdowns on demonstrators since popular protests began in October 2019, calling for basic services and an end to corruption.

"We receive threats almost daily on social media, but this will not prevent us from continuing to sit-in in Haboubi until our demands are met." Khayat said.

Activist Maytham al-Mufadhal, also from Nasiriyah, told Rudaw English that they demand authorities reveal the fate of the activist Sajjad al-Iraqi, who was kidnapped by an unknown party in September.

"We received many government promises to reveal Sajjad's fate, but several months passed and the results of the investigation were not released. The sit-in continues until the fate of Sajjad is revealed," Mufadhal said.

Activists are often threatened, kidnapped and killed for their involvement in the protest movement. Iraqi Prime Minister Mustafa al-Kadhimi sent counter-terror forces to Nasiriyah to find Iraqi in September, claiming to know of his location, but he is yet to be found.

Protests return to Wasit as youth burn tyres on the streets 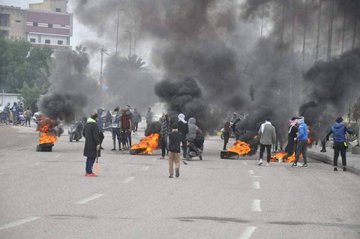 Militia forces affiliated with Shiite cleric Muqtada al-Sadr raided a number of activists' houses in Iraq’s Najaf province on Saturday night, activists told Rudaw English. The raids came a day after a group of activists chanted slogans criticizing the cleric on the one year anniversary of the killing of tens of people by Sadr supporters.

Activists on Friday held a ceremony to mark the one year anniversary of a massacre in Najaf’s Sadrayn square where Sadr supporters known as the "Blue Caps" stormed an anti-government protest camp. Twenty-three people were killed and more than 182 wounded, according to AFP.

Live rounds and petrol bombs were used against protesters during clashes, and their tents were burned or removed. Days later, Sadr announced the dissolution of the "Blue Caps" militia.

Video from the anniversary ceremony on Friday showed dozens of people gathered in the Writers Union Hall in Najaf, chanting slogans against the Sadrist movement and its leader. "No god but Allah. Muqtada is the enemy of Allah,” they shouted in clips that went viral on social media.

The day after the ceremony, forces from the pro-Sadr Saraya al-Salam (the Peace Brigades) militia stormed the homes of four activists, terrorizing them and their families, according to Najaf activist Saif al-Mansoori.

This follows Friday's action in Najaf.  Fadhel al-Nashmi (ASHARQ AL-AWSAT) reported, "Unidentified assailants attacked the headquarters of the Iraqi Communist Party in Najaf with Molotov cocktails, burning the offices despite causing no causalities."  It's related.  In the past the Communist Party partnered with Moqtada.  That partnership broke and last week they announced an alliance with the demonstrators.  Then their headquarters were bombed.

There is none.  So he just avoids the topic.

Also among the no-mentions was Afghanistan. How can Biden give his first speech on foreign policy without discussing the country’s longest war? That is really remarkable. The names Iraq and Syria also do not appear in the speech. Amazing.

The 20 minute speech contained no mention of Iraq, as Dr. Abbas Kadhim pointed out in a Tweet:

There was no mention of #Iraq in President
@JoeBiden
's foreign policy today. The only Iraq-related policy was the decision to review the previous administration's plans for troops withdrawal from various AoRs. That will include Iraq and we'll see what the review result will be.
4:36 PM · Feb 4, 2021

On Oct. 16, 2002, President Bush signed the Authorization for the Use of Military Force Against Iraq Resolution Joe Biden supported it and happily posed for this photo 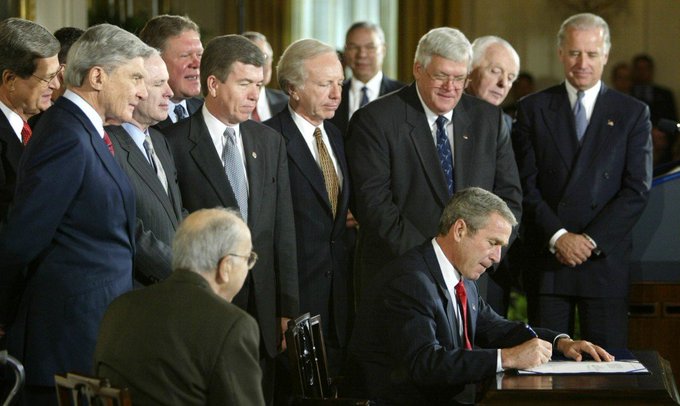 All these years later he has to 'familiarize' himself on Iraq before he can figure out a policy?  He has nothing to offer because he chooses to have nothing to offer.  And if he truly had any regret over his Iraq War vote, he would be compelled to make up for it now.  He's doing nothing because he doesn't now -- and never did -- give a damn.  That's why, when he threw out the Iraqi votes of 2010 via The Erbil Agreement, he went to Baghdad and gave puzzled Iraqis a lecture about Ireland -- a lecture that had nothing to do with them.

It's not like Joe can't talk about Iraq at all.  He can lie about it.  And he's been lying yet again.  Rudy Takala  (MEDIAITE) explains:

President Joe Biden on Thursday repeated a claim to a gathering of State Department employees that he once came under fire abroad.

“You have great personal courage. I’ve been with some of you when we’ve been shot at,” Biden told staff, without detailing the incident in question.

It’s unclear what specific incident Biden was referring to in his remarks, but in the past he has faced scrutiny for similar comments. Biden previously made the claim at a Democratic presidential primary debate in July 2007. “Number one, you take all the troops out,” he said. “You better have helicopters ready to take those 3,000 civilians inside the Green Zone, where I have been seven times and shot at. You better make sure you have protection for them, or let them die.”

He later clarified those remarks to say he was inside a building in Iraq’s Green Zone with a contingent of visiting senators that “rattled” as a result from a blast in 2005, and suggested the “shot” that had been fired was akin to mortar fire. “I was near where a shot landed,” he said. “No one got up and ran from the room — it wasn’t that kind of thing. It’s not like I had someone holding a gun to my head.”

Patrick Campbell, then legislative director for Iraq and Afghanistan Veterans of America, told The Hill at the time, “Veterans don’t like it when people mischaracterize their service, people who overstate what happens to them. We have names for them.”

George Washington University professor Stephen Hess said in 2007 that the claim “fits into [Biden’s] profile, and that’s exactly why he should be terribly careful about statements that may not quite parse out or deconstruct under scrutiny.”

Biden has a reputation for gaffes and stretching the truth. He said incorrectly in 2008 “I am a hard coal miner,” and was forced to drop out of the 1988 Democratic presidential primary for plagiarism of speeches and a law school paper.

So he can talk about Iraq, he just can't tell any truths about that country.  Then again, Joe has an estranged relationship with the truth:

When you oppose the horror that is western imperialism people try to paint you as a radical extremist who can’t just be reasonable and pragmatic about things, but really nothing could be further from the truth. There’s nothing “radical” or “extreme” about opposing the domination of the entire planet with relentless acts of mass slaughter to the detriment of the world’s most vulnerable populations, all because some sociopaths in DC decided that it is good and reasonable to inflict any amount of terror upon our world to preserve unipolar US hegemony. Opposing this is just basic human sanity.

People will act like you’re unreasonable and impossible if there’s not a single US politician you support.

If you are an anti-imperialist, being asked to choose a US politician you support is like being asked to pick a favorite Nazi. The US empire is the single most evil and destructive power on our planet right now and everyone on Capitol Hill is an imperialist facilitator of mass murder, yet you’ll be treated like an extremist moonbat if you don’t like any of them. The problem isn’t that an anti-imperialist has strange, impossible standards, it’s that they oppose an insane and murderous status quo which only elevates leaders who will advance that status quo.