Kat:  MISS SHOW BUSINESS, Marion informed me in an e-mail, can be purchased online at WALMART on vinyl.  It's a new vinyl edition of Judy Garland's classic album from 1955.  I'm a big fan of Judy's (here I reviewed a series of books about her).  My favorite movies include her SUMMER STOCK, FOR ME AND MY GAL, THE PIRATE, EASTER PARADE, THE CLOCK, IN THE GOOD OLD SUMMERTIME, THE HARVEY GIRLS, I COULD GO ON SINGING and, of course, THE WIZARD OF OZ.  It's from that last film classic that one of the great songs of the 20th century hails, "Over The Rainbow."  Judy's recording of Harold Arlen and Yip Harburg's Academy Award winning song remains one of the great recordings of all time -- one entered in The National Recording Registry and made the best film song by The American Film Institute.

But Judy's singing goes well beyond just that song.  Her recording career starts out on the DECCA label and on the 78 format.  This was before the vinyl albums we're familiar with -- called "lps" for long players, the 33 revolutions per minute, as opposed to 78 revolutions per minute.  Frank Sinatra was the person whose artistry revolutionized the recording industry as he turned the musical album into something more than a random assortment of songs. He did this in the fifties and in partnership with Nelson Riddle on the CAPITOL label. Judy herself would move to CAPITOL and release seven studio albums there, four live albums and two soundtrack albums (A STAR IS BORN and I COULD GO ON SINGING) during her lifetime.  Along with her CAPITOL and DECCA work, Judy also recorded for ABC, MGM, COLPIX and WARNER BROTHERS.  So I was shocked, when visiting WIKIPEDIA a few years back, to discover that their entries on Judy's albums were pretty much non-existent and when they did have an individual entry on a Judy album, it listed the song titles and that was about it.  WIKIPEDIA is notorious for its sexism -- it took the threat of  lawsuit, after all, for them to stop making entries about female singers all about who they supposedly slept with (slut shaming two singers in particular while doing nothing of the sort with male singers).  So I really shouldn't be surprised that another woman artist was ignored by WIKIPEDIA.  But Judy is one of the great singers and, sadly, WIKIPEDIA is seen as a credible resource.

I've reviewed her albums ALONE and JUDY with the hope of adding to the conversation.  Now let's tackle MISS SHOW BUSINESS which was the first of her CAPITOL releases.  CAPITOL had success with Nat King Cole, Frank Sinatra .  At the time, Judy's film career appeared to again be over despite her Academy Award nominated performance for 1954's A STAR IS BORN.  She was developing a large following as a live performer throughout the fifties and I word it that way because we're repeatedly told in one bad biography after another that Judy becomes a live performer after MGM drops her in 1950.  This 'fact' ignores not only Judy's beginnings, her many, many radio appearances and her live appearances to promote her films (such as 1939's tour that concluded in NYC with multiple performances daily from her and Mickey Rooney), it also ignores her historic first tour.

December 7, 1941, Judy was live on the radio.  She was performing on THE CHASE & SANBORN HOUR -- an NBC radio program.  In the midst of her singing "Zing! Went The Strings Of My Heart," the broadcast was interrupted with the news that Japan had bombed Pearl Harbor.  The broadcast continued with Judy and Edgar Bergen and his puppet Charlie McCarthy expected to continue entertaining in between news updates about the bombing.  Following that, Judy would do her first tour as a solo performer (as opposed to part of The Gumm Sisters)  and it would last from January 21st to February 9th with her doing a second tour beginning September 8th.  The first tour was her visiting various training bases and performing for the GIs.  The second tour included selling war bonds and heading an entertainment program that also included Lucille Ball, James Cagney, Mickey Rooney and Fred Astaire.

Once MGM dropped her in 1950, Judy did begin a live act that was like nothing else she'd done before, true.  But she was a much applauded live performer from the start of her career and that included after she had started making movies as well.

1945 was her last DECCA album (they would continue to issue compilations of previous recordings) and 1946 was when DECCA issued her last single. 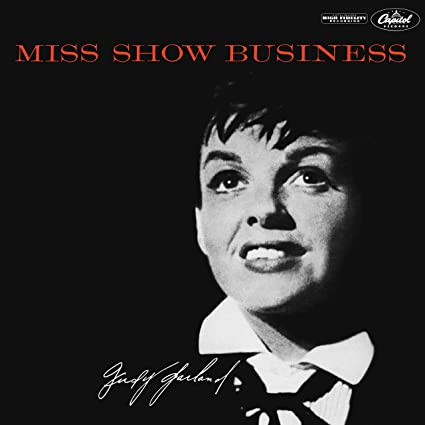 MISS SHOW BUSINESS would be her first studio album in ten years.  Alan Livingston was a vice president at CAPITOL when Judy was signed and he stated, "We want to record Judy's greatest songs for posterity.  The audio tracks of her early career [the DECCA recordings] are flawed and scratchy.  Since then, then the technology in the recording industry has vastly improved."  The album's release was timed for maximum effect -- it was released in September of 1955, days after CBS aired  Judy Garland's special on THE FORD STAR JUBILEE.  Like the TV special, the album was a hit reaching number 5 on BILLBOARD's album charts and remaining in the top forty for seven weeks.

Then ten track album was produced by Douglas Laurence.  It is one of the only albums he produced.  Laurence produced many films including SPEEDWAY and LIVE A LITTLE, LOVE A LITTLE -- both starring Elvis Presley.  For the album, Laurence and Garland tried to feature some of her best known songs such as "Over The Rainbow" and "The Trolley Song" but with new arrangements by Harold Mooney and which an orchestra conducted by Jack Cathcart.  Trumpeter Cathcart was married to Judy's sister Mary Jane Gumm (she went by Suzanne) from 1941 to 1963.  Beginning in 1952, he worked as an arranger for Judy -- including on THE FORD STAR JUBILEE special, the film A STAR IS BORN and Judy's 1956 performances at The Palace on Broadway.

The album opens with a chorus singing "This Is The Time Of The Evening" that quickly fades into Judy performing Bill Engyick, Alec Wilder and Morty Palitz's "While We're Young."   It's the first of three medleys on the album.  The second track is a medley of her MGM film songs: "You Made Me Love You" (BROADWAY MELODY OF 1938),  the title track "For Me And My Gal" and, from MEET ME IN ST. LOUIS, "The Boy Next Door" and "The Trolley Song" -- it's cleverly arranged, especially during "For Me And My Gal" where the notes swoop in and out and "The Trolley Song" which is fast-paced but a little less frantic than the arrangement in the film allowing Judy's vocals to have a lot more freedom.  Track three, the first song Judy sings in full, is the Irish traditional ballad "A Pretty Girl Milking Her Cow" which Judy first sang in the film LITTLE NELLIE KELLY.  Al Jolson's classic "Rock-A-Bye Your Baby With A Dixie Melody" was new addition to Garland's recordings.  With this song, you either copy Al Jolson or find your own way.  Judy's second verse owes a lot to Jolson's version but she opens and closes it on her own terms.  (I still prefer Aretha Franklin's 1961 version, in part because the accompaniment doesn't bash you in the head as the song builds.)

"Happiness Is A Thing Called Joe" follows and Judy is in fine form.  Her voice glows on this Harold Arlen and Yip Harburg classic.  Cher recently tried her hand at it and it was a disaster (not as bad, however, as Cher's early 70s version of "Rock-A-Bye Your Baby With A Dixie Melody") but Judy makes it come alive and is either tied as the best recording or the second best with Ethel Waters' version coming in first.   Behind Judy and Ethel?  Peggy Lee did an outstanding version.  Like Ethel, Judy brings each word to life by acting the song.  It's a mini-play and Judy turns in a subtle performance that really moves you with an arrangement that gives her plenty of room to breathe.

So ends side one.  Side two begins with another medley, this one saluting her live act at The Palace.  It opens with special material written by Roger Edens about the road to The Palace and then moves onto some of the songs she made legendary in her performance there.  "Shine On Harvest Moon" works tenderly but seems negated by the brassy "Some Of These Days" which seems triumphant when it should be a little less so considering the point of the song (that the singer's going to be missed by the ex-lover one of these days).  "My Man," the Fanny Brice classic largely known these days due to Barbra Streisand's performance of it in FUNNY GIRL, is tender and right and far too short.  "I Don't Care" and over a minute of Eden's material close out the medley and I'd trade them both just for Judy doing another verse of "My Man."

Judy's back into Al Jolson territory on the second song on side two, "Carolina In The Morning" (as in "Nothing could be finer than to be in Carolina . . .").  The arrangement here is just too much.  By the time you're listening to the instrumental bridge, you may feel exhausted but think "It has to calm down" but, no, it doesn't have to and, no, it doesn't.  It's all too much and too showy and might work well for a big band but is lousy for a studio album by a singer.  "Danny Boy" follows  and, possibly because it leans heavily on a the choir throughout, it's a tender arrangement that allows Judy to work the magic that only she could.   She gets to caress, she gets to sooth and when a moment for drama arrives, she delivers it spot on.

"After You've Gone" is a song that countless entertainers have recorded. Those who recorded it before Judy include: Bessie Smith, Sophie Tucker, Louis Armstrong, Ruth Etting, Bing Crosby, Fats Waller, Duke Ellington, Charlie Parker and, yes, Al Jolson.  Judy does a fine job here.  But it's nothing compared to what she does with the song five years later on JUDY AT CARNEGIE HALL.  If you haven't heard that latter version, you'll probably be pleased with it here -- maybe even knocked out by it.

The album closes with Judy doing a wonderful version of "Over The Rainbow."  Judy was infamous for refusing to allow this song to be mocked or messed with.  She knew it had special meaning to many people and she never wanted to lessen that meaning.  That may be why the horns don't try to overwhelm her the way they do in too many of the tracks on this album.

I would argue that Judy loses the wrestling match to the horns on "Carolina In The Morning."  I'd also argue that despite Alan Livingston's stating that CAPITOL wanted "to record Judy's greatest songs for posterity," the label didn't quite live up to that intent.  Judy shows up and she does an outstanding job . . . when she's allowed to.  But on this first CAPITOL album, she's too often competing with arrangements that are fussed over and that treat her as a background noise to the horns.  JUDY and ALONE are great CAPITOL albums.  MISS SHOW BUSINESS?  It's a good album that each listen will remind you could have been so much better.