Kat: Judy Garland's always with us, have you noticed?  Renee Zellweger, for example, just won an Academy Award for playing Judy in the film JUDY.   As a big fan of Judy's, I'm always interested in her art.  In 2018, I reviewed several books about Judy.  In 2019, I came across her album ALONE and reviewed it.  It remains my favorite of her studio albums.

As amazed as I was by ALONE, I was more surprised that there's not a huge body of work covering her albums.  She's one of the 20th century's greatest singers.  A male of her stature, like Frank Sinatra, has his ever recording analyzed.  Males no where near Judy's stature can also boast of significant critiques of their output.

From 1955 through 1965, she recorded for CAPITOL.  She started with the west coast label as it was acquired by the United Kingdom's EMI.  Frank Sinatra, Nat King Cole, Dinah Shore, Dean Martin, Keely Smith and Harry James, among others, were her label mates when she signed on.  By the time she left the label, it would be most famous for being the label of the Beatles.

Judy recorded studio albums for the label as well as four live albums -- the most famous and revered being JUDY AT CARNEGIE HALL .  That double disc album has never been out of print.  It lodged 13 weeks at the number one spot on the American charts and it won four Grammys -- Album of the Year, Best Female Vocal Performance, Best Engineered Album and Best Album Cover. 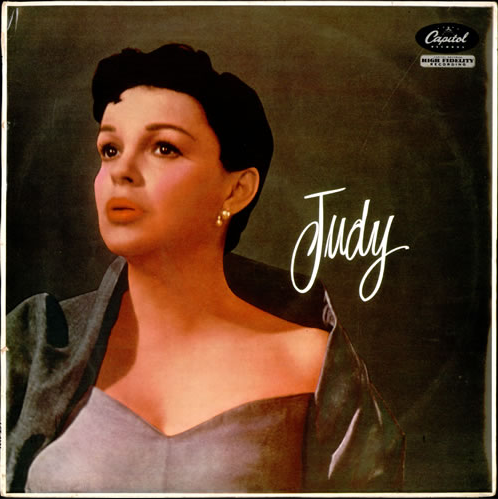 Her album JUDY was released several years before JUDY AT CARNEGIE HALL.  The 1956 album was arranged by Nelson Riddle and was her second CAPITOL album.  It's eleven tracks (I'll come back to that).

Quibbles?  "I Feel A Song Coming On" is very sleight song to me.  If you're going to use it, you probably need to open the album with it.  Instead, it's the third track and, sandwiched between better songs "Just Imagine" and "Last Night When We Were Young," it really does not shine.  It sounds like what it was, filler for the 1935 film EVERY NIGHT AT EIGHT (the song appears three times in that film).

Instead of that song, the album opens with a percussion heavy "Come Rain Or Come Shine."  You could imagine Sheila E., today, doing this version of the Harold Arlen and Johnny Mercer classic song.  Judy gets to strut vocally on this song and it's a sure footed opener.   One of the few reviews I could find of a Judy studio album was in THE NEW YORKER (I have the CD ROM collection of THE NEW YORKER) and they noted:

What he [Nelson Riddle] has done with Harold Arlen's "Come Rain Or Come Shine" is particularly striking.  Always an engaging song, it becomes electrifying when Miss Garland, singing impulsively and altering the notes at will, is given a boost by her colleague's curiously driving instrumental support.

The song that follows is dream scrawled on vinyl.


Judy floats those lyrics on heavenly notes and it's a tender approach that really nails the song and pulls you in.

"April Showers" is another track that she's incredibly effective on and the way she uses elongated notes on that song is something to marvel over as are the instrumental interludes in the song.  "Any Place I Hang My Hat Is Home" is a song that's been recorded to great effect by Frank Sinatra and Barbra Streisand.  Many other artists have covered that song but few have made it their own.  On this album, Judy makes it her own and provides a lasting version of the song.  "I Will Come Back" is a one of a kind performance.  The song would later be used by Judy on the episode of THE JUDY GARLAND SHOW where she remembered and mourned President John F. Kennedy.  CBS had refused to allow her to do a tribute to JFK -- a show of patriotic songs with no spoken dialogue at all, to be aired the week after JFK's assassination.  But CBS President James Aubrey said no and that the country had to get back to nits normal routine.  Weeks later, knowing Aubrey planned to axe her show, she ignored him and recorded "The Battle Hymn of the Republic" and ended the show with "I Will Come Back."  She recorded it for the album JUDY because it was one of her father's favorite songs.

The songs she recorded for this album were all songs that she was new to.  Her friend Roger Edens had been so important to her at MGM -- he was a songwriter and an arranger and, most of all, someone Judy could trust.  Though she had long ago parted from MGM, when it came time for this album, she again consulted Edens who told her that since her 1955 CAPITOL debut MISS SHOW BUSINESS had featured songs she'd been identified with for years ("Somewhere Over The Rainbow," "A Pretty Girl Milking Her Cow," etc), for the follow up she should record songs that she'd never tackled before.  ("Last Night When We Were Young" is a song she recorded many times and it was forever being cut from the films.  Her recording of it for JUDY was the first time the public got to hear her sing it.)

I really love her performance of Eubie Blake and Andy Razaf's "Memories Of You."


She's just amazing on that track.

I'm going to offer another video.

"I'm Old Fashioned."  I'm not reviewing that one.  If you download the album, you'll get that as a bonus track.  I'm reviewing from a vinyl LP and that's not on it.

The vinyl version is 11 songs and, other than "I Feel A Song Coming On," these are great songs and great performances.  Judy can alternate from brassy to dreamy in the same song.  She will always be one of the country's greatest singers.