Wednesday, March 11, 2020.  The press and various hacks pretend the primary race is over when it's only just begun.


Starting in the US with the race for the Democratic Party's presidential nomination, War Hawk Joe Biden had a very good night, Bernie Sanders did not.  Joe Queally (COMMON DREAMS) reports:

Despite suffering another round of defeats in multiple primary voting states on Tuesday to former Vice President Joe Biden, supporters of Bernie Sanders' 2020 presidential run are not about to give up the fight just yet and political observers are noting that even if the delegate lead Biden has amassed ultimately proves insurmountable the Democratic Party will have to win over voters inspired by Sanders if President Donald Trump is to be vanquished in the general election.
"This is a very dangerous moment for the Democratic Party," said CNN contributor Van Jones as the results from contests in six states—Mississippi, North Dakota, Missouri, Michigan, Idaho, and Washington—were reported. With Sanders' especially high hopes for Michigan dashed by a substantial margin of victory by Biden, Jones said, "You have an insurgency about to be defeated. What do you do with the people that you defeat?"

The fact that "a lot of young people" believed "they had a champion" in Sanders, argued Jones, is not something that Democrats should ignore. "Young people who are graduating with a quarter million dollars in debt, young people with a lot of pain, and they had a champion," he said. "And they thought they were going to be able to surround the divided establishment with their movement, crush that divided establishment, and move forward. Instead, the establishment united and stopped them. Now what do you do?"


Though it was Joe's night, it's not his night to the extent the corporate media is pretending.  NBC NEWS' official delegate count puts Joe at 836 which would be really impressive if Bernie wasn't at 686.  To win the nomination outright, you need 1991 delegates.  Neither has even reached 1000 yet.  No, the race is not over.


Corporate media and hacks beholden to corporations like James Carville want the process to be over.  And they want that because there is a lot at stake -- such as whether you will provide the people with what the need -- Medicare For All, for starters -- or not. 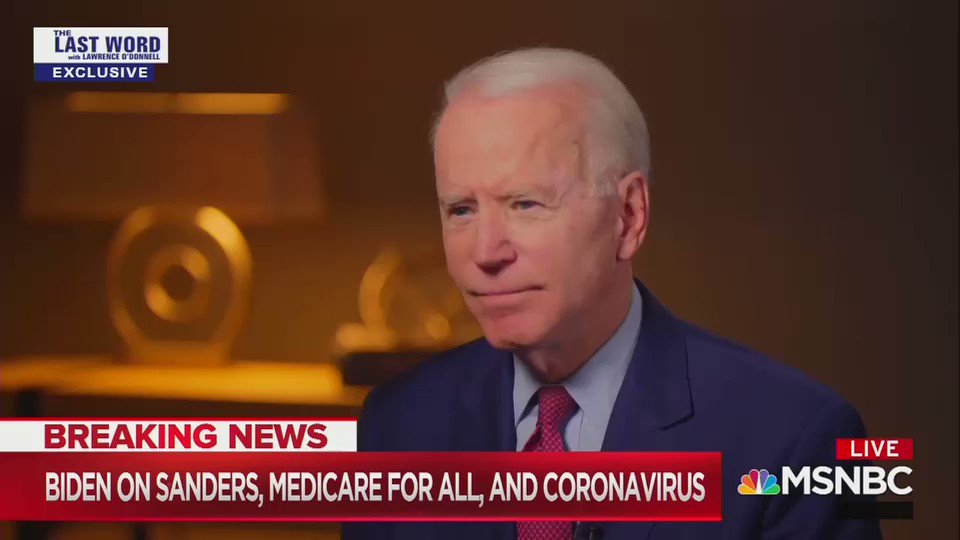 1:26
Talking Points MemoVerified account @TPM
Biden when asked if he would veto Medicare for All: "I would veto anything that delays providing the security and certainty of health care being available now."
78 replies496 retweets1,943 likes


It is a battle.  Do you address climate change -- not stupid little non-binding treaties full of words that don't matter (The Paris Agreement) -- or not?

Joe is on the or-not side.  And that's why corporations are pimping him like crazy.

To stop Bernie, the corporate media and its whores had to Red bait like crazy, slander him repeatedly (and what's with the attacks on David Sirota? that's beyond nonsense and should stop immediately) and liken him to Nazis and other atrocities while pretending like Joe Biden was functional when he so clearly is not.

Bree Newsome Bass‏Verified account @BreeNewsome 11h11 hours ago
Bree Newsome Bass Retweeted Miles Parks
Yikes. They want to rush and end the primary to reduce the chances that Biden “gets himself into trouble” (quoting Clyburn). Y’all understand that carrying Biden over the finish line won’t be an option in the general right? He’ll have to do 1-on-1 debates w Trump
Bree Newsome Bass added,
Miles ParksVerified account @MilesParks
Rep. Clyburn on NPR just now: "I think when the night is over, Joe Biden will be the prohibitive favorite to win the Democratic nomination... If the night ends the way it has begun" it's time to "shut this primary down," meaning the DNC should "step in" and cancel future debates.
Show this thread
116 replies584 retweets2,100 likes

The entire campaign has been about keep Joe 'safe.'  Because he can't really connect.  To try to make him seem rational, they've shortened his speeches with the hopes that he'll make less glaring mistakes.   And they treat his behavior as normal.  It is not normal.


But they look the other way or try to treat it like it's normal.  That's not normal at all and if replacing a bully in the White House with another would not be an improvement.  More to the point, Joe can't stand up against Donald Trump.

To keep him afloat, his campaign has had to baby him and the media's had to look the other way.

John Iadarola‏Verified account @johniadarola 12h12 hours ago
John Iadarola Retweeted Ana Kasparian
It can't be overstated how significant this has been in the course of the primary.
John Iadarola added,
Ana KasparianVerified account @AnaKasparian
CNN’s Coverage of Sanders Was 3X More Negative Than Biden Following Their Big Primary Wins - In These Times: http://inthesetimes.com/article/22354/cnn-bernie-sanders-joe-biden-media-spin-candidates-negative-mentions …
95 replies698 retweets3,341 likes

Samuel D. Finkelstein II‏ @CANCEL_SAM 21h21 hours ago
Factory worker in Michigan asks Biden about his position on gun rights. Biden immediately gets very agitated, puts his finger in the man’s face, and begins shouting about “AR-14’s.” This is how we lose the rust belt to Donald Trump.

It's likely that the real winner of 2020 will end up being Hillary Clinton.  How so?  If Joe's the party's candidate and crashes and burns as badly as it seems he will, Hillary's 2016 loss won't seem as bad and the fresh outrage will be at the DNC for again working against their own members to steal the nomination.

Andrew Yang endorsed Joe Biden this week.  Why is anyone surprised?  Yang stood for nothing.  He wanted to redeem nuclear energy and no one wanted to take that on -- not even in the press.  Yang was a blowhard who used his money to buy his way into the primary and then tried to use his money to buy supporters.

Beto?  You mean "I like to be spanked in public by my male friends and have it taped on a cell phone" Beto?  Are we really taking him seriously?  And all the Joe supporters -- Beto, Amy, Andrew, Bloomberg, Kamala and Corey (I'm confused, Rosario came out, does Corey need to?) all ran for the nomination and wanted to act like they were better than Joe -- Kamala, you were Cornpop -- but now all the sudden you rally behind him?

Some are pressing Elizabeth Warren to rally behind Bernie?  I would love it if she did but I'm also aware of the deals that have been made, the threats and more.  The best we can probably hope for is that Elizabeth doesn't endorse anyone.

Julian Castro can probably ignore any pressure from the Biden campaign.  A) Joe's not popular with Latinos and is not that popular in Texas.  B) Julian is a Clinton holdover so he's not indebted to anyone.

Marianne Williamson has endorsed Bernie Sanders as have Mayor Bill de Blasio and former-Senator Mike Gravel (the press, when they bother to note which former candidates have endorsed Bernie, tend to forget Mike).

With all the hype so many are giving Joe Biden, you'd think (a) he was John F. Kennedy reborn and (b) he'd be doing much better than he is.

But he's a lousy candidate -- and we all know it -- and they just hope to carry him over the finish line for the primary.

They'll probably act like it's the 20th century and let him take a few weeks off around the GOP convention.  They used to do that, Democratic candidates, in the days before the 24 hour news cycle.

Joe needs a rest.  He's probably about to get weepy and lose it public again.  (He came close yesterday.)  He can't manage his emotions or function in a normal manner.  He's taking 'pick me ups' and has been doing so for weeks now.  They only make him more agitated.

This is who the DNC wants and if it means they lose to Donald, they are okay with that.

Again, if Joe is the nominee, the winner will most likely be Hillary Clinton.  She hasn't endorsed and she probably shouldn't since Joe is far from a sure thing in the general.  She doesn't need to be seen as tipping the scales for someone who will lose to Donald.


Oh, well, the DNC can spend the next decades rebuilding support, right?  Or just move even further to the right and try to grab Republican voters.


The race is not over yet.

Varisha Khan‏ @VarishaMK 4h4 hours ago
Varisha Khan Retweeted Shaun King
We’re not giving up yet. I won my own race by 66 votes. Julia Mejia won her race by 1 vote. Both of us had a recount. Every

And we fight until the. very. end. Biden, America will see you on the debate stage in 5 days. #NotMeUs

Joe has a record, a nasty and bloody one.

ajpolyticks‏ @ajpolyticks 3m3 minutes ago
Replying to @RaeyHan @ibrahimpols
No, nominating Biden is an insult, and I refuse to vote for anyone who voted for the Iraq War.
0 replies0 retweets0 likes

Gef  🇨🇺/ 🇵🇸‏ @Rarastafarian 2m2 minutes ago
No one can shame me into voting for Biden. Guy voted to murder hundreds of thousands of people in Iraq. F**k you.
0 replies0 retweets0 likes


Everyone will not rush to consolidate around Joe if he is the nominee.

As noted in yesterday's snapshot,  2 US troops were killed in Iraq on Sunday -- Gunnery Sgt Diego D. Pongo and Capt Moises A. Navas


Marine Raider Regiment Commanding Officer Col. John Lynch remembered both men as “incredibly humble.”
“Gunnery Sgt. Pongo balanced that with his larger-than-life personality,” Lynch said in a statement.
“The command as a whole became witness to his dynamic personality, and love for family, when he brought his mom to this past year’s Marine Corps Birthday Ball ceremony and together they out-danced the rest of us on the dance floor,” Lynch said. “He also loved going on adventures with his daughter, hiking, camping, and woodworking.”


Pongo, who joined the Marines in 2004 and served eight years with the elite Marine Raiders, is survived by his daughter and his mother, Marine Forces Special Operations Command said in a statement.
[. . .]

Navas, who previously served as an enlisted Marine after joining in 2004, earned his commission through an enlisted-to-officer program in 2010 and served as an infantry officer before becoming a Raider in 2016. He is survived by his wife, daughter and three sons.

Navas enlisted in the Marine Corps in 2004. He moved up in the ranks from an administrative clerk and deployed in support of Operation Iraqi Freedom and Operation Inherent Resolve before this current deployment in Iraq.
His commendations include a Purple Heart, the Joint Service Commendation Medal, the Navy and Marine Corps Commendation Medal, the Navy and Marine Corps Achievement Medal among others.
He is survived by his wife, daughter and three sons.
The second Marine killed was identified as Gunnery Sgt. Diego D. Pongo, a critical skills operator from Simi Valley, Calif.
During his 8 years as a Marine Raider, Pongo completed deployments to both Iraq and Afghanistan, earning a Bronze Star Medal with Combat Distinguishing Device for heroic actions against the enemy in 2013 while deployed in support of Operation Enduring Freedom.
He is survived by his daughter and parents.


Meanwhile, the protests continue in Iraq.


It's really something the way the western media keeps trying to bury the protests and yet the protests continue.