Joe's gaffes continue as do protests in Iraq

In the US, the race for the Democratic Party's presidential nomination continues and the gaffe machine that is Joe Biden never ends.  Greg Re (FOX NEWS) explains:


Joe Biden is racking up endorsements from former rivals and Democratic insiders, but a gaffe-riddled 7-minute speech on Saturday in St. Louis, Missouri, led President Trump to tweet out an edited clip that appears to have the former vice president endorse the current commander in chief.
During the brief address, Biden, 77, declared: "If you want a nominee who will bring this party together, who will run a progressive, positive campaign, and turn, turn this primary from a campaign that's about negative attacks into one that's about what we're for -- because we cannot get -- re-elect -- we cannot win this re-election -- excuse me. We can only re-elect Donald Trump -- if, in fact, we get engaged in this circular firing squad here. Gotta be a positive campaign, so join us."
Biden also bizarrely described himself as an "O'Biden Bama" Democrat, transposing his name and the name of his old boss.
The muddled remarks led to renewed concerns from both Republicans and left-of-center commentators that Biden may be mentally unfit for the presidency. On Twitter, President Trump jokingly took Biden's speech as a mangled endorsement.


Oh, Joe, if only he knew what he was doing.  Meanwhile Tim Hains (REAL CLEAR POLITICS) detects efforts by foreign governments to interfere with the US elections.  Yes . . . Australia's at it again!  The host of SKY NEWS' OUTSIDERS, Rita Panahi, is saying Joe is "so confused that he has trouble remembering where he is and why he's there. Biden's cognitive issues have been evident for some time but just watch the same media who for four years have been declaring Donald Trump mentally and physically unfit for office have a collective meltdown when Biden's mental faculties are questioned. Can you imagine that man in a presidential debate with Donald Trump?  There's not enough popcorn in the world."  Those Australians! Trying to fix the US election yet again!  Scott Morrison, have you no shame, sir, have you no shame?


Vermont Sen. Bernie Sanders has launched an offensive against former Vice President Joe Biden in the days since last week’s Super Tuesday results essentially rendered the Democratic presidential primary a two-man race.
Sanders’s push, which has included speeches and media appearances, has focused on criticizing aspects of Biden’s record, including past support for the Iraq War, the Wall Street bailout, and cuts to Social Security. The pair have also traded blows on the airwaves, with Sanders launching an ad highlighting Biden’s past calls for freezing Social Security to help balance the budget and Biden responding with a commercial of his own accusing Sanders of engaging in a “false” and “negative attack.” On Sunday, the Sanders campaign sent a memo to surrogates and endorsers urging them to double down on the Social Security critique while highlighting Sanders’s “lifelong fight to defend Social Security.”
“Biden clearly knows this is an enormous weakness in the Democratic primary, and it would be a major political vulnerability in a general election. Bernie does not have that same vulnerability — unlike Biden, Bernie has unwaveringly fought to protect and expand Social Security for his entire career,” reads the memo, which Yahoo News obtained from a campaign source.

As the campaigns continue, Bernie is getting endorsements.  Jessica Corbett (COMMON DREAMS) reports on one endorsement:

Civil rights leader Rev. Jesse Jackson Sr. on Sunday endorsed 2020 Democratic presidential primary candidate Sen. Bernie Sanders and urged black voters to reject the "moderate path" in favor of a progressive agenda that aims to actually meet the needs and demands of their communities.
The endorsement from Jackson, who sought the Democratic nomination in 1984 and 1988, came just a day after the U.S. senator from Vermont held a rally in Chicago's Grant Park attended by about 15,000 people. Jackson spoke Sunday at a Sanders campaign event in Grand Rapids, Michigan.
Registered Democrats in Michigan, Idaho, Mississippi, Missouri, North Dakota, and Washington are slated to weigh in on the party's presidential primary race on March 10, followed by voters in Illinois, Arizona, Florida, and Ohio on March 17.

Rev Jesse Jackson is a key endorsement.  Unlike some of Joe's endorsements in the last seven days, Jesse hasn't spent all of 2019 insisting he would be the best president and the next president to only now show up saying Joe's the best.  Pete, Amy, Kamala, all of ya, you weren't right about your own campaigns so what makes you think you're right about Joe?

Jessica Corbett reports on the other big endorsement of Bernie:

Octogenarian actor and activist Jane Fonda declared ahead of a climate action protest in California Friday that the United States needs a "climate president" and she is now backing Sen. Bernie Sanders, who is leading a grassroots movement challenging the Democratic Party establishment coalescing around former Vice President Joe Biden.
"We have to get a climate president in office, and there's only one right now, and that's Bernie Sanders," Fonda told USA TODAY prior to the Los Angeles rally. "So, I'm indirectly saying I believe you have to support the climate candidate."
Rep. Tulsi Gabbard (D-Hawaii) is technically still in the Democratic presidential primary race, but Super Tuesday effectively made it a two-person contest between Biden and Sanders (I-Vt.). USA Today noted that Fonda previously donated to Sens. Amy Klobuchar (D-Minn.) and Elizabeth Warren (D-Mass.), who have since ended their campaigns.

Sanders' Green New Deal proposal to tackle the global climate crisis and ensure a just transition to renewable energy has been hailed by climate advocates as a "game-changer." The plan, unveiled in August 2019, calls for "100% renewable energy for electricity and transportation by no later than 2030 and complete decarbonization by at least 2050."

Author and activist Naomi Klein, who has written extensively about the climate crisis and endorsed Sanders, welcomed Fonda's support for the presidential hopeful in a pair of tweets Saturday:

Naomi Klein‏Verified account @NaomiAKlein
Naomi Klein Retweeted The Hill
Last Oct, @Janefonda announced she would protest, and often get arrested, every Friday, as part of a push to get a candidate who clearly backs a #GreenNewDeal in the White House. There is now only one candidate who represents that planet-protecting possibility: #BernieSanders
Naomi Klein added, 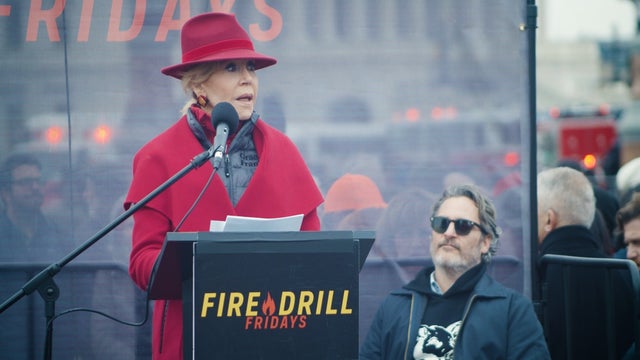 
We should also note that Lucy Flores -- a strong Elizabeth Warren supporter -- has endorsed Bernie.

Lucy Flores‏Verified account @LucyFlores Mar 6
It’s clear we have much work to do before society sees women leaders as just “leaders.” As we work towards that, the task of achieving big structural change remains & there’s only one presidential candidate left who is committed to that- @BernieSanders. Together, we can get there
339 replies1,239 retweets7,475 likes


In Iraq, the protest continue.

ريحانة الخفاجي 🍯‏ @Rayhana_AK 5h5 hours ago
I want every Iraqi to watch this & remember why the hell we are still protesting. Stop ignoring your own peoples cry for help. *Reminder* “Those who are silent when others are oppressed are guilty of the oppression themselves” - Imam Hussain #IraqiRevolution #IraqProtest #عراق
/>
1:42
56 views
0 replies0 retweets3 likes

, I'd like to re-share this piece which features some of the many strong women I met in Baghdad's Tahrir Square who've been, and always are, at the forefront of the protest movement and frontline of any battle. #Iraq https://aje.io/z24nc  #Iraq
0 replies0 retweets4 likes