Thursday, May 27, 2021.  An arrest takes place in Iraq though the western media and the Iraqi press are in conflict over what the arrest was for. The militias surround the prime minister's compound and you may be saying, "Huh? This wasn't on THE NEWSHOUR or CBS EVENING NEWS or . . ."  No, it wasn't.

One day after protests across Iraq against the wave of terrorism gripping the country since activists with The October Movement started getting assassinated, someone is finally arrested for terrorism.

REUTERS explains, "Iraqi security forces on Wednesday arrested militia commander Qasim Muslih, the military said, in a move security sources said was linked to attacks on a base that hosts U.S. forces."

He is thought to have carried out attacks on the activists but, to read the western coverage, that is apparently not part of the charges currently against him.  Elsewhere?  It's a different story.  Iraq's NRT reports:

Iraqi police arrested a senior official in an Iran-backed armed group Wednesday (May 26) on suspicion of orchestrating the murder of a prominent pro-democracy activist, a security source told AFP.

Qasem Muslah, a commander in the state-sponsored Hashed al-Shaabi paramilitary coalition, is the first high-ranking official in the powerful group to have been arrested in relation to a wave of murders of pro-democracy activists and journalists that started in 2019.

A spokesman and other sources within the Hashed said Wednesday evening that Muslah had been released, but the government has yet to confirm the move.

"At dawn in Baghdad, police intelligence arrested Qasem Muslah, Popular Mobilization Forces (Hashed) operations chief for Anbar province, who gave the order to kill Ihab al-Wazni on May 9 and another activist Fahim al-Taie in December 2019," the security source said.

Anti-government campaigner Wazni was shot dead outside his home by men on motorbikes using a gun equipped with a silencer early on May 9 in the holy shrine city of Karbala, sending protest movement supporters onto the streets to demand an end to such bloodshed and official impunity.

Wazni had for many years criticized Iraqi armed groups and Iran's influence in the country, leading protests in Karbala, where pro-Tehran armed groups hold major sway.

The arrest warrant was issued on May 21st.

ALJAZEERA notes, "A copy of the arrest warrant issued for Muslih that circulated on social media and was verified by the security sources said he was arrested under the anti-terrorism law, but did not have further information." 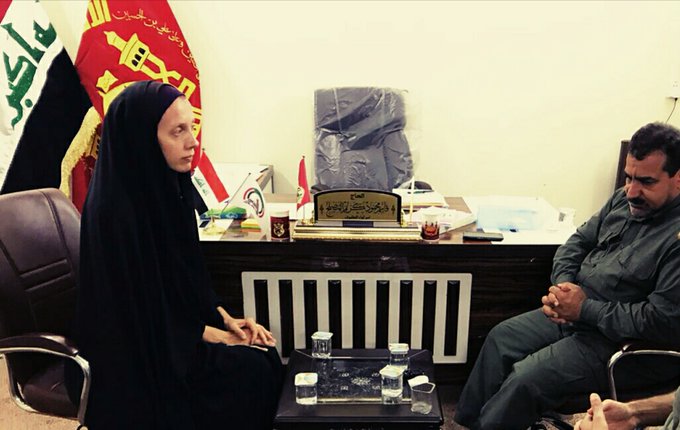 In a 2018 interview with him for
@AlMonitor
, he told me: “This [attack] only happened because they took it away from us and gave it to the army, which is under the Americans (...)The army is weak. It can’t control anything.’’

"Local security sources contacted by
@AlMonitor
in #Qaim claimed that non-local PMUs were actually behind the attack. The sources said the move was in retaliation for cutting the route used by PMU fighters to bring supplies into #Syria, and to prevent investment"
1:13 PM · May 26, 2021

"Musleh said Danish forces shot at the PMU headquarters in Qaim and spoke of the United States as the enemy throughout the entire interview, barely mentioning IS at all except to claim that the Americans were supporting it."
1:16 PM · May 26, 2021

"Musleh made some easily disputed claims throughout the interview, such as that the city of #Rawa had been liberated before #Qaim (...) “When the PMUs entered Abu Kamal’’ just across the border in #Syria, he added, grinning, “that was the final blow to the US"
1:22 PM · May 26, 2021

Conflicting reports as to whether he has since been released. Iraqi Commander-in-Chief spokesman says he "will remain in the custody of the Joint Operations Command until the end of the investigation"

From my 2nd interview with him for
@AlMonitor
: "#Musleh, the deputy head of security at the #Karbala shrines, said "#Israel and #America" were trying to create divisions(...) he holds both a governmental position and one within the religious establishment"

Not everyone is happy over the arrests.  Syed WaQas Ali Tweeted: 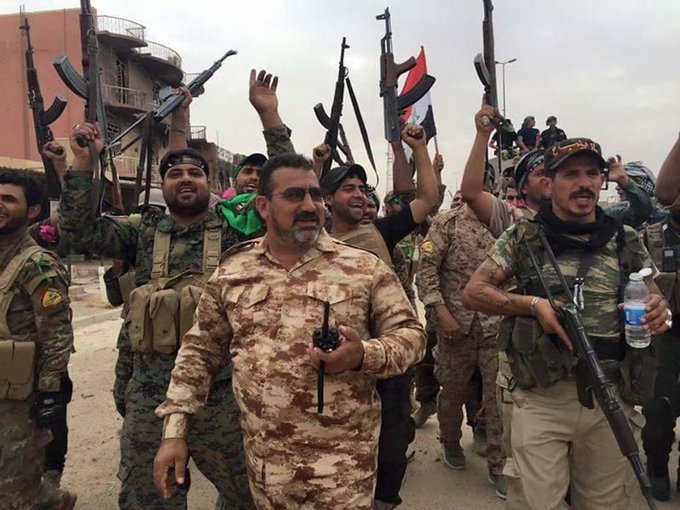 And the PMF has issued demands:

That was online.  Offline?  AP reports:

Shortly after the arrest, forces affiliated with the PMF, which maintains offices inside the heavily fortified Green Zone, were deployed surrounding Prime Minister Mustafa al-Kadhimi's headquarters.Tensions reached fever pitch when Iraqi security forces and the elite Counter-Terrorism Service were deployed to protect the government and diplomatic missions, sparking fears of violence. Some armed PMF factions gathered around the Green Zone's entrance gates. The presence of the PMF inside the seat of Iraq's government was considered by some senior Iraqi government officials as a way to pressure al-Kadhimi to release Musleh.

The prime minister described the show of force as “a serious violation of the Iraqi constitution and the laws in force," adding in a statement “we have directed an immediate investigation into these movements.”

Antonio Guterres is the Secretary General of the United Nations.  Jeanine Hennis-Plasschaert is his Special Envoy to Iraq.  She Tweeted the following:

Any arrest case should run its course, as goes for any Iraqi. And surely, nobody should resort to a show of force to get their way. Such behaviour weakens the Iraqi state and further erodes public trust. State institutions must be respected at all times. Nobody is above the law.

In Karbala some took to the streets to protest the arrest.

Demonstrations in the holy city of Karbala infront of Imam Hussain’s shrine denouncing the kidnapping operation of a leader of the Popular Mobilization Units by Al-Kadhemi, Abu Ragheef and the US. 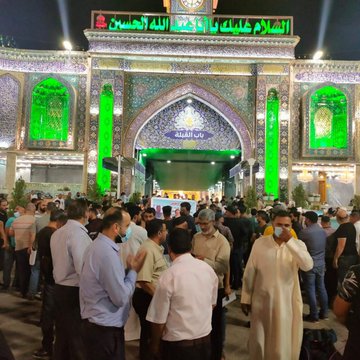 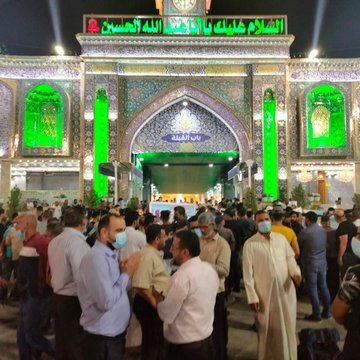 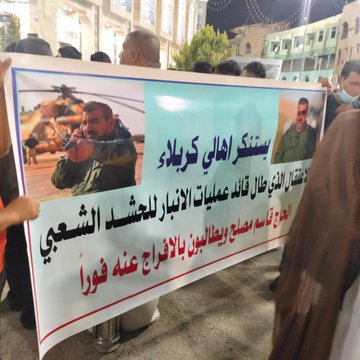 A much larger presence turned out in Baghdad on Tuesday to protest the killings of protesters, the government's corruption and much more.

Iraq's High Commission for Human Rights reports 2 protesters were killed in Baghdad during the Tuesday demonstration with at least 20 more injured.