At the top of yesterday's snapshot, the following appeared:

The militias surround the prime minister's compound and you may be saying, "Huh? This wasn't on THE NEWSHOUR or CBS EVENING NEWS or . . ."  No, it wasn't.

To its credit, 13 hours ago THE NEW YORK TIMES published Jane Arraf and Falih Hassan's report on what's been taking place:

Iraq’s leader has been under intense pressure to rein in the dozens of paramilitary groups that are nominally under the command of the Iraqi government but have proved seemingly impossible for him to control.

That was made abundantly clear this week, when Prime Minister Mustafa al-Kadhimi ordered a move against one militia leader and quickly paid a price.

After government forces arrested a paramilitary commander on Wednesday, Iraqi militias backed by Iran mounted a show of force in and around the heavily guarded Green Zone in Baghdad, in a confrontation that goes to the heart of who controls security in Iraq.

Curbing the Iranian-backed militias that emerged in 2014 to fight the Islamic State — and have now become an entrenched part of Iraq’s security — was one of Mr. Kadhimi’s key promises when he took power last May. Bringing to justice those who kidnap and kill government protesters was another pledge.

A year later, he is seen as having failed to deliver on either of them.

The catalyst for the latest confrontation was an interior ministry arrest warrant in the killing of two young Iraqi activists shot in the Shiite holy city of Karbala. One was shot dead on May 9 by gunmen on motorcycles using silencers. He had survived a previous attempt on his life that killed a fellow activist, Fahem al-Tai, in Karbala last December.

As noted in yesterday's snapshot, while the western press (wire services) were avoiding the issue of the activists, the Iraaqi press was reporting that the charges included the targeting of activists.  The one that is referred to in the last NYT paragraph above, the one who had survived one assassination attempt before being killed earlier this month, was Ihab al-Wazni.

As THE NEW ARAB notes:

Qasem Muslih is accused of giving the order to kill anti-government campaigner Ihab Al-Wazni, who was shot outside his home by men on motorbikes on 9 May in the holy city of Karbala.

Ihab al-Wazni was on the minds of activists that turned out in massive numbers on Tuesday.

The protest movement in Iraq is organizing a mass demonstration on May25under the slogan(Who Killed Me)to demand justice for Ihab Al-Wazni, Hisham Al-Hashemi, Reham Yacoub and 800 others who have been killed with impunity since October 2019
@UN
@UNIraq
#Tishreen_return_in_May 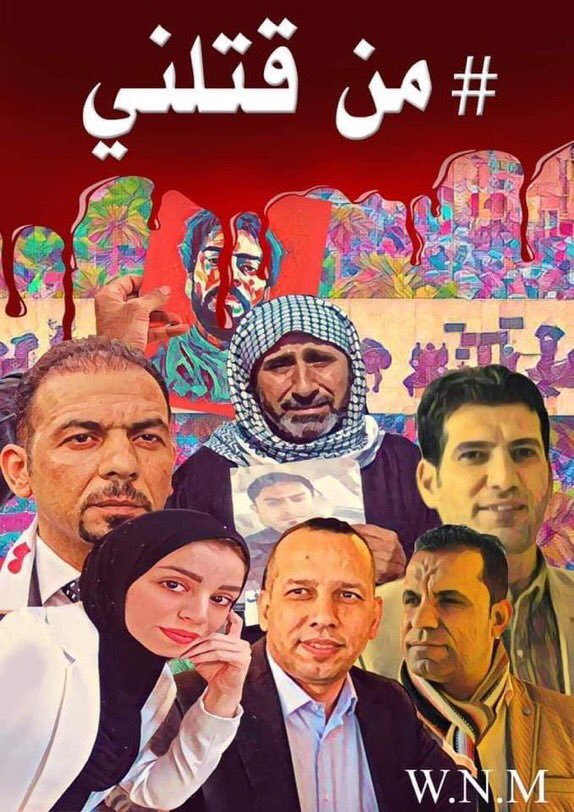 "Liar Kadhimi! Liar!" a woman holding an image of assassinated protest leader Ihab al-Wazni leads a chant as protesters gather for a mass demonstration in Baghdad to condemn government failure to end killings of activists. https://rudaw.net/english/middleeast/iraq/240520213…
4:46 AM · May 25, 2021

Also, freedom of expression is lacking in Iraq when you are a civil activist and criticize the parties and militias of Iran. You will be killed, as happened by the Iraqi activists, Ihab Al-Wazni, Fahim Al-Ta’i and others, thousands who were killed because of saying the truth.
4:30 PM · May 26, 2021

Wazni’s family have publicly accused Musleh of killing Ihab. "We charged him with the murder of my brother Ihab. My mother filed a lawsuit against him. We are sure that he was the mastermind of my brother's assassination," Marwan al-Wazni told MEE.
8:59 AM · May 27, 2021

The Crisis Group's Lahib Higel offers her take in the following thread:

[Thread] As embarrassing as today’s events seem for Kadhimi there may be something gained for political elites that stand with the ‘state’ against the ‘non-state’.
5:38 PM · May 26, 2021

Whether Muslih is released or not, the reaction of Hashd faction’s only serves to discredit their own image. Since the Tishreen protests, and even before, the Hashd’s sanctity has been on steady decline among Iraqis.
5:38 PM · May 26, 2021

The killing of Ihab al-Wazni in Kerbala provided an opportunity for the government to capitalise on the street outrage and renewed calls for accountability.
5:38 PM · May 26, 2021

It facilitated the protests and utilised it as a pretext to target Muslih, whose background is not coincidental. From Kerbala, he long served as a commander of the Atabat security but during the war on ISIS turned to pro-Iran, Liwa al-Tufuf.
5:38 PM · May 26, 2021

With October elections around the corner, the government and its political backers, may benefit from provocations that discredit the forces opposing it.
5:38 PM · May 26, 2021

The question remains, however, to what degree these forces are ready to up the pressure. So far, it appears that negotiated settlements keep the political peace.
5:38 PM · May 26, 2021

In comparison to the aftermath of the June 2020 Dora raid when arrested KH members were released, the detainee is now held in shared custody of the joint operations command and the security of the Hashd. A minor nuance, yet a concession on part of the Hashd, even if temporary.
5:38 PM · May 26, 2021

I'm sure it was a political calculation as much as anything else.  Elections are supposed to take place this fall.  Despite stating he was going in as prime minister for a very brief time, he'd get elections and then get out, Mustafa quickly changed his mind.  He now wants a second term.

Where are the votes going to come from?

Not from supporters of former prime minister and forever thug Nouri al-Maliki.  His alliance is strongly critical of Mustafa.  The October Movement (the activism that began in the fall of 2019) might seem an ally; however, factions of the movement have announced that they don't intend to vote because Mustafa has done nothing as one activist after another has been killed.

Remember, this is the movement that overthrew the previous prime minister.

And Tuesday's huge protest in Baghdad (and elsewhere, but Baghdad had the largest turnout) no doubt reminded Mustafa and his advisors of just how strong and large The October Movement actually is.

Due to COVID, a number had stopped turning out at the protests in recent months.  Rallying behind the assassination of Ihab, they turned out in full force and then some.

That could be a huge voting bloc.  And Mustafa needs something to get a second term.  He's done nothing as prime minister. Nouri is his enemy (Nouri's State Of Law remains a large bloc with strong support) and the only one he's had any success with when it comes to reaching out has been cleric Moqtada al-Sadr whose influence has waned.

Let's go into that for just a moment because it goes to the power of The October Movement -- a movement the US outlets have largely ignored -- from WSWS on through the corporate media.  Moqtada is a failue all by himself.  But people need hope and they rallied around him when he returned to Iraq after fleeing yet again.  He seemed to mature with the realization of how many people were vested in his success.  But then came The October Movement.

As Moqtada always does, he saw a popular movement and tried to co-opt it and tried to use its popularity to argue for his own.  He didn't organize, he didn't inspire.  He tried to hitchhike on an already popular issue -- just like he did recentl on the demonstration in support of Palestinians held in Baghdad.  He was one of many militia leaders calling for a large turnout.  But the lazy, western press credited the turnout to him in one wire article after another.  Despite the fact that he and his spokesperson have a public record of verbally attacking the Palestinians going back to 2006 -- a reality ignored by the wire services but well documented on Arabic social media.

Moqtada forgot that he had hitched a ride and then began trying to control the movement -- issuing orders to people who were not his followers.  When they refused to comply, he denounced them.  This resulted in a huge backlash so he quickly backed off that.

Then he tried to controlling them.  He issued orders that men and women could not protest together.

That went over about as well as you would expect.

At the next demonstration, women were only more prominent and various activists carried signs denouncing Moqtada.  He just couldn't let it go and still can't.  It was only weeks ago that he was serving up a veiled threat that women who are protesting should be "gang-raped."  Out of concern, you understand he raised the issue of "gang-rape."

This is the man the western media refuses to challenge and instead glorifies over and over.  It wasn't always that way.  (Reminder, this is the same western media that reduced these protests to men only while we repeatedly objected to that lie.  I note that the wire services, when they carry photos of this week's demonstrations make a point to select ones that include women; however, with their large turnout, it's really impossible for the wire services to continue to ignore the women.)

At any rate, Mustafa wants a second term but doesn't have the votes.  The arrest can be seen as a campaign offering, no question.

I'm glad that THE TIMES reported on what's going on; however, it needs to be noted that the story was published hours after the US State Dept had already issued its own statement raising the issue:

Rule of Law in Iraq

The United States is outraged that peaceful demonstrators who took to the streets to urge reform were met with threats and brutal violence.  Moreover, the violation of Iraqi sovereignty and rule of law by armed militias harms all Iraqis and their country. We welcome every effort by the government to hold accountable the militias, thugs, and vigilante groups for their attacks against Iraqis exercising their right to freedom of expression and peaceful assembly as well as for their assault on the rule of law.

We reaffirm the U.S. government’s enduring commitment to the Iraqi people and a strong, sovereign, and prosperous Iraq.