Kat: Were Judy Garland still alive, she would have turned 100-years-old yesterday.

And catching up today on that coverage, what a load of crap.  NPR may be the worst because that's tax payer money being used to pay someone to scan YOUTUBE.  What a f**king idiot Aisha Harris is.  Next time, just don't type when you don't know a damn thing.  She has so many errors in her piece and she doesn't even try to assist Judy.

By that I mean, women get shortchanged.

It's 2022, for example, and Cher's still not in the Rock and Roll Hall Of Fame.  And part of the reason is because enough of us aren't noting her accomplishments in the music field.  That's why I wrote the following:

With regards to Judy Garland?  I've written "Kat's Korner: Give Judy her due" -- the first album review I did of her and it was because I noticed that despite being one of our great singers, Judy's discography is largely invisible online.  Contrast that with all the pieces written online about this or that album by Sinatra.  Now I like Frank's singing.  But he and Tony Bennett and many more get all this attention and Judy's albums are ignored.

We can't ignore some of the songs and the reason for that is "Over The Rainbow" is bigger than anything Frank or Tony ever recorded.  But we don't give Judy the credit for being an album artist.

That's a glaring omission and it's because of sexism.  Which is why, each year, I'm trying to cover a Judy album.  I followed my 2019 piece with "Kat's Korner: Judy does JUDY" and  "Kat's Korner: Judy's good -- but not great -- album" to do more than whine, to enlarge the conversation and to put a spotlight on Judy's recordings.

I don't tolerate an NPR fool who want to pretend to be writing about Judy the singer and offers a nod to JUDY AT CARNEGIE HALL.  And only that album.

That's not about celebrating Judy.  That live album won four Grammys -- including Album of the Year.  It's the safest one to note and, sadly, the stupid people only note it.

LP stands for long player -- a 33 and a 1/3 album.  Frank Sinatra is rightly credited with enriching the studio album and making it a concept or a statement, something more than just a gathering of songs.  But Frank didn't invent and he didn't do it alone.  The time period he starts making albums is a time period where others are doing the same and the women erased from that time period.  Judy was also at CAPITOL -- the label where Frank redefined the album with such classics as IN THE WEE SMALL HOURS OF THE MORNING and SONGS FOR YOUNG LOVERS. And at CAPITOL, Judy recorded some first rate studio albums.

The one I'm focusing on now is JUDY IN LOVE. 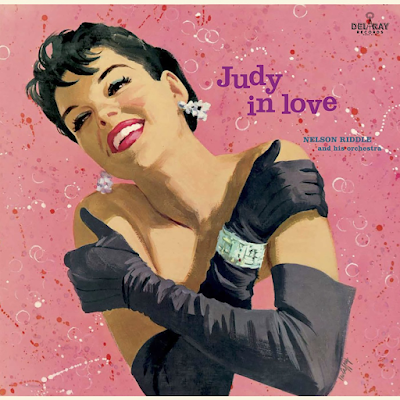 She worked with Frank's finest arranger, Nelson Riddle, on this album and it's a completely different feel and statement than what she's done earlier on MISS SHOW BUSINESS, JUDY and ALONE.  Those are strong albums -- the last two should be considered classics of the form -- but this really is a different statement from Judy.  She sounds in love, excited and hopeful.

"More Than You Know" sometimes seems done to death.  It's a great song but it's been done and often done poorly.  Michelle Pfeiffer brought life to it again in THE FABULOUS BAKER BOYS by adding a tentative and hesitant (shy?) quality to it.  Judy offers a confident take on it and most who know the song and saw the title on the album probably expected her to turn this into a torch song -- maybe the all time torch song.  That is what most singers do with it.  They try to turn it into an acting tour de force.  Judy, like Michelle Pfeiffer, was a naturalistic performer and maybe that's why they both found different but fresh ways to perform the song.

"I Am Loved" is the perfect follow up because Judy continues the confident approach and floods the song with warmth as Nelson utilizes the horns, the bells and the drums in an arrangement that really floors me.  He is rightly praised for his work over the years -- with Sinatra, with Linda Ronstadt, Peggy Lee, Johnny Mathis, Ella Fitzgerald, Nat King Cole and Dinah Shore among others.  He really outdoes himself with his arrangments on this album.  And Judy rises to the challenge, her voice is glowing on this album.

"I Concentrate On You" may be the big marvel because it calls on so many shifts for her -- in mood, in delivery.  The arrangement is amazing and Nelson's never done so much with horns as he does in the arrangement for this song.

"I Can't Give You Anything But Love"?

For me, it's another standout.  I know the song because of BRINGING UP BABY.  Katherine Hepburn has a leopard delivered to her and the leopard is crazy about that song so Katherine -- and later Cary Grant as well -- must sing the song constantly throughout the film.  I've seen that film probably a hundred times -- it's a comedy classic.  And I know the song by heart.

But it's a new song, fresh and alive, on JUDY IN LOVE.  It's not just that she sings an opening verse that's usually left out of the song when it's performed or recorded.  Listen to the way she immerses herself into the song, the way her vocal slinks and caresses.  She hits some high notes that we often don't hear from her.  It's a very romantic song and she puts so much feeling into it.

Throughout the album, I'm bowled over by Judy's singing, the way she shades "blue" when singing "I'm Confessin' (That I Love You)," for example.

And grasp how this could so easily be a maudlin song heavy with pathos and melodrama but Judy turns it into a shared confession.  Cole Porter's "Do It Again" is a revelation and listen to how she ends the song.  Track after track, JUDY IN LOVE demonstrates just how much talent and skill Judy Garland possessed.

That this album isn't better known is an injustice.  I love Frank's IN THE WEE SMALL HOURS, I think it's a masterpiece.  I'm glad that I can easily find over a hundred reviews of it online and that if I go to the WIKIPEDIA entry, I've got this huge entry that tells me about his life leading up to the recording, about the ways the songs were chosen, about this about that, about the reception -- both critical and popular -- to the album, about the legacy of the album, about the cover art, about . . .

But I GOOGLE "JUDY IN LOVE" and I've got THE JUDY ROOM and I've got the WIKIPEDIA entry and both really just offer a track listing.  We don't get who played on the album, we don't get much of anything.  At least THE JUDY ROOM gives us seven sentences (mainly about mono and stereo).  I like THE JUDY ROOM, it's one of the few sites that treats Judy the singer as an artist, not a novelty.

Judy Garland turned 100 yesterday and if you read the garbage -- and it was garbage -- you saw that she wasn't treated as an artist.  They noted a movie or two -- frequently getting the facts wrong -- and they noted "Over The Rainbow" while tossing in a few sentences about the live album (JUDY AT CARNEGIE HALL) that made it obvious that they'd never listened to the album.  And that was really it.  As though one of our greatest vocalists sung on soundtracks and that was really it.  As though she never made an artistic statement on a studio album.

But she did six powerful albums for CAPITOL.  Three are classics -- JUDY, ALONE and JUDY IN LOVE.  MISS SHOW BUSINESS is a strong album, maybe even a minor classic.  There are two more that I plan to review. (I'll probably ignore THE GARLAND TOUCH because I don't count it as part of the studio album genre -- it is a compilation of various recording sessions and not a true concept album.)   I hope that by the time I review those two, we can see a real appreciation for what Judy did online, a real embrace of her artistry.

And that we can grasp that she started out on 78s.  The long playing album (LP) was a completely new artform when she and Frank and Dinah Washington began experimenting in the fifties.  Let's by all mean give Frank the credit he deserves, but let's please stop pretending that a number of women (including Peggy Lee and Doris Day) weren't also there exploring and creating the standards we expect from an album today.  Judy earned her place in recording history and it was a damn shame to read over 40 articles about her that ran yesterday and find not one of them could talk about her as an album artist or the real contributions she made to that genre.  They couldn't even identify her as a jazz singer -- despite the fact that her first MGM short defined her as such.

Listen to JUDY IN LOVE and you'll be able to grasp all that the hack writers ignored yesterday.