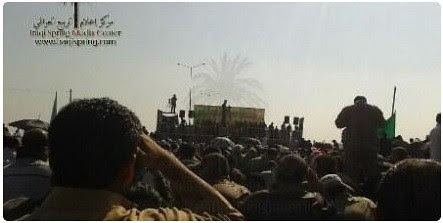 That's an Iraqi Spring MC photo of today's demonstration in Falluja.  Since December 21st,  ongoing protests have been taking place in Iraq.  Layla Anwar (An Arab Woman Blues) explained the reasons back in February:


Protests are raging throughout Iraq...thousands upon thousands are demanding the following :

- End of Sectarian Shia rule
- the re-writing of the Iraqi constitution (drafted by the Americans and Iranians)
- the end to arbitrary killings and detention, rape and torture of all detainees on basis of sect alone and their release
- the end of discriminatory policies in employment, education, etc based on sect
- the provision of government services to all
- the end of corruption
- no division between Shias and Sunnis, a one Islam for all Iraqi Muslims and a one Iraq for all Iraqis.

The protests in Anbar, Fallujah, Sammara, Baquba,  Tikrit, Kirkuk, Mosul...and in different parts of Baghdad stress over and over 1) the spontaneous nature of the "popular revolution against oppression and injustice" 2) its peaceful nature  i.e unarmed  3) the welcoming of ALL to join the protests regardless of sect or ethnicity as ONE Iraqi people and 4) and the March to Baghdad.


Layla Anwar and Iraqi Vice President Tareq al-Hashemi are among the few who can publicly note what led to the protests.  The western press likes to reduce it to one event.

Iraqi Spring MC notes protests also took place in Mosul, Samarra, Baiji, Rawah, Tikrit, Ramadi,  The protests are regularly ignored by the western media.  They do have a Tweet this morning:

Patrick Cockburn (Independent) can never be bothered with reporting these massive, ongoing citizens protests.  But let oil enter the picture and the 'reporter' is suddenly interested.  Yesterday, he reported:

Hundreds of foreign workers are being hurriedly evacuated from Basra in southern Iraq following violent protests by Iraqi oil workers and villagers over two incidents.
In one of them, a British security man tore down a poster or flag bearing the image of Imam Hussein, a figure highly revered by Shia Muslims. The violence may make international oil companies more nervous about operating in Iraq, which is at the centre of the largest oil development boom in the world.

Oil, oil, oil.  Patrick Cockburn doesn't give a damn blood flowing in Iraq but offer him an oil angle and suddenly he's all horned up.

USLAW received a brief message from Hassan Juma'a Awad, President of the Iraq Federation of Oil Unions, informing us that at a court hearing in Basra today, all charges against him filed by the Ministry of Oil and South Oil Company were dismissed.

This is the second time criminal charges were thrown out by the court.  After the first dismissal in July, the Ministry of Oil and management of South Oil Company appealed the decision.  The appellate court reinstated the charges and sent the case back to the lower court for another hearing.  That hearing was held today, November 10, 2013.
In his message, Brother Juma'a thanked U.S. Labor Against the War, Solidarity Center, American, European and other unions and labor federations for support and solidarity, without which he would likely have been convicted and could have been imprisoned for three years and fined huge sums.