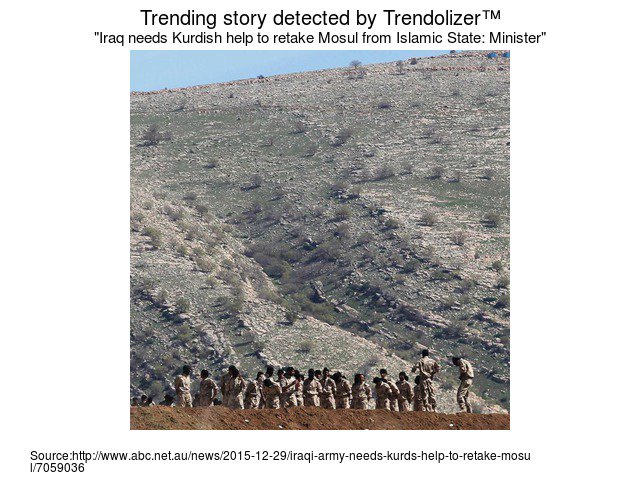 Mosul lies on the horizon -- immediate or distant.

'Liberation' of the city would come with bragging rights and the Kurds don't want to be left out of that opportunity.


Nyshka Chandran (CNBC) offers an analysis of the Ramadi effort including noting that it is an eight month battle so far -- a detail most ga-ga coverage is missing.  From the analysis:

"The capture of Ramadi isn't that much a strategic event in and of itself. The fight definitely isn't over yet," Sim Tack, director of analytical support and military analyst at Stratfor, told CNBC on Tuesday.
"They are still clearing out pockets of the city, there's going to be a long process before they can call Ramadi secure. And then, there's still the continuing threat from IS, which still holds Fallujah and other areas in Anbar."

Today, Iraq's Prime Minister Haider al-Abadi made the journey to Ramadi to proclaim victory in liberating the city from the Islamic State.

The declaration was premature as events made clear.

At some point this week, Ramadi may indeed be liberated -- or at least be ridded of the Islamic State.  That point has not, however, been reached yet.

But he wants bragging rights.

The battle for Ramadi is hailed by the media as a 'victory' and it has nothing to do with whether or not Ramadi's liberated.

It has everything to do with propaganda and the never-ending struggle between the governments of the United States and Iran.


It goes back to Tikrit and March of this year when the mission to run the Islamic State out of the city began.

These were Iraqi military forces and the Shi'ite militias including the extremist, thuggish Shi'ite militias.  This included the Badr Brigade led by thug Hadi al-Amiri who stood out in 2015 mainly for threatening the US Congress with violence until this month when, as Mona Alami (AL-MONITOR) notes, "Hadi al-Ameri, the powerful leader of the Badr forces in the Iraqi Popular Mobilization Units, threatened in a statement Dec. 7 to attack any new US base in Iraq."


In Iraq and out of Iraq, Hadi al-Amiri is seen as a puppet for the government of Iran and he was seen as carrying out their orders in the efforts against Tikrit.  In addition, Iranian forces were taking part in the battle and Quds Force Commander Qassem Soeimani was in Iraq.

The mission was a failure.

And the US government provided limited assistance until the Iranians left.

As a result of that departure, Shi'ite Iraqi thugs with links to Iran -- including Haid al-Amiri -- pulled back.


It was during the pull back that the US government increased air strikes and Tikrit was freed of the Islamic State -- though overrun with Shi'ite thugs.  (When Ned Parker attempted to report this reality for REUTERS, his life was threatened and, despite nearly a decade covering Iraq for THE LOS ANGELES TIMES and REUTERS, he had to leave the country.)

The success in removing the Islamic State from Tikrit belonged to Iraqi forces and US air power.

In the battle for Ramadi (which remains ongoing), Iran's been left out of the party -- intentionally.

And bragging rights are out of its reach.

Haider used the Iraqi military and Sunni tribes and US bombings.


The rush to proclaim Ramadi a success is about the US getting credit and Iran losing out.

It's about Haider al-Abadi attempting to circumvent and weaken the Shi'ite militias.

It's about a great many things.

It is not, however, about Ramadi being liberated.

Ramadi is the after thought.

As Michael Knights (at the BBC website) observes, "This dynamic is important because Shia militia commanders like Abu Mahdi al-Muhandis, a US-designated global terrorist, or Hadi al-Amiri will probably seek to play key roles in the liberation of Mosul."


Today, the US military announced:


Strikes in Iraq
Fighter, attack, bomber, and remotely piloted aircraft conducted 22 strikes in Iraq, coordinated with and in support of the Iraqi government:

-- Near Sinjar, one strike suppressed an ISIL mortar position.

-- Near Tal Afar, one strike destroyed an ISIL-used culvert.

Task force officials define a strike as one or more kinetic events that occur in roughly the same geographic location to produce a single, sometimes cumulative, effect. Therefore, officials explained, a single aircraft delivering a single weapon against a lone ISIL vehicle is a strike, but so is multiple aircraft delivering dozens of weapons against buildings, vehicles and weapon systems in a compound, for example, having the cumulative effect of making those targets harder or impossible for ISIL to use. Accordingly, officials said, they do not report the number or type of aircraft employed in a strike, the number of munitions dropped in each strike, or the number of individual munition impact points against a target.


Finally,  Janan Aljabiri and Joanne Payton (FAIR OBSERVER) report on 'compensation' marriage in Iraq -- where a woman isn't a human being, just a bargaining chip:


These arrangements are termed al-Fusliya in Arabic and badal khueen (blood substitute) or jin be xwên (woman-for-blood) in Kurdish. Such “compensation” marriages have been recorded in Pakistan and Afghanistan and are increasingly found in modern Iraq. Here, tribes are an enduring method of social organization, in some cases predating Islam in the region, and they have become an increasingly important method of social cohesion as the state has become weak and discredited.
In one striking case, 50 women and girls were exchanged in order to resolve a tribal feud in the Basra, al-Shawli and al-Kharamasha area at the end of May.
Women married under such arrangements may not divorce and are required to sever any contact with their natal family. The young bride—who may well be a child for whom no other arrangement has yet been made—may be mistreated by the family in reprisal for the initial crime against their kinsman, and live as a virtual slave with none of the status or recourses of an official wife. Poor people, unable to raise blood money, are most likely to marry off their daughters in such forms of reconciliation. They are also least likely to be able to intercede in cases of marital abuse.

Winding down their report, the writers notes that the Islamic State's crimes have "served to distract from the ongoing miseries of Iraqi women outside their territories, dealing with the aftermath of several decades of war that have eroded both the state and civil society."