"Bill Clinton is a rapist!"

The cry was heard yesterday.

It stems from Juanita Broaddrick's charge that Bill raped her in 1978.  She came forward publicly in 1999.  She was one of at least three women that Congress was informed of during the impeachment of Bill Clinton by the House and the censure of him by the Senate.

And let's be clear, he wasn't impeached for "sex" or for "lying about sex."

He lied under oath, denying his affair with Monica Lewinsky.  But he also was impeached for obstructing justice.  This had to do with attorney Bill -- who knew the law -- trying to coach Betty Currie into lying for him under oath.

It wasn't just him lying, grasp that, he tried to get his White House assistant to lie for him.

After the impeachment and censure had taken place, NBC NEWS finally aired the interview with Broaddrick that they had been sitting on.

In 1999, Juanita Broaddrick publicly charged Bill Clinton had raped her.

He has never commented.

He has never been asked about it.

The issue flared up again when Hillary Clinton, War Hawk and fake feminist, declared that all victims should be believed.


"I want to send a message to every survivor of sexual assault: Don't let anyone silence your voice. You have the right to be heard.
Hillary, September 14, 2015

This led to a rally where she was confronted with the question of what about Juanita Broaddrick, Paula Jones (whom Bill Clinton payed nearly a million dollars to end her lawsuit against him for harassment) and the other women.

Hillary snarled that the person was rude and refused to answer the question.

It's strange that a man would be accused of rape and refuse to answer the charge for nearly two decades.

It's equally strange that his wife would do the same.

Yesterday, Hillary hit the party town of Fort Lauderdale in Florida and it's there that the cry of "Bill Clinton is a rapist!" was heard again.


Clinton's voice became hoarse as she yelled: “I am sick and tired of the negative, dark, divisive, dangerous vision and the anger of people who support Donald Trump.
“It is time for us to say no, we are not going backwards, we’re going forward into a brighter future.”


Samantha Chang (BPR) observes, "Hillary can dish it out but she sure can't take it."  NBC NEWS notes that Hillary "unloaded" on the protester -- but they -- and so many other -- fail to mention Juanita Broaddrick.

How is that reporting?

But notice that Hillary didn't deny the charge.

She's screaming her head off, in the middle of her 20 minute speech that she shortens to get the hell out of there, but she never says what most wives would in a similar situation, "My husband is not a rapist."

Is there a reason she can't say those words?

"Bill Clinton is a rapist!," was yelled before he was escorted away.
Clinton seemed unfazed by the interruption.
"They sometimes lose their way, they start calling us names that better apply to their candidate and their campaign" said Clinton, referring to GOP nominee Donald Trump.


Bill doesn't answer the charge either.

He's standing in public, speaking to a small crowd, and he's called a rapist for his actions with Juanita Broaddrick and he doesn't respond to that?

How hard is it for him to say, "I did not rape that woman"?


We know he can say, "I did not have sexual relations with that woman."

He had a two year affair with Monica Lewinsky and yet went on national television to declare, "I did not have sexual relations with that woman."

There he was just accused of a consensual affair.

And yet he felt the need to respond (to lie).

But he was accused of rape in 1999 and he's never spoken to that charge.

Nor has his wife.

And it's not an issue that's going to go away.

And let's repeat that Congress learned of Broaddrick's allegation at the same time they learned of two other women saying he'd raped them.

But the charge is out there and he has refused to answer it.

(Hiding behind David E. Kendall is an act of weasel words even for Bill who knows all about weasel words and hair splitting over what the definition of "is" is.)

If Michael Dukakis' wife Kitty had to be examined by the press, so should Bill and the country has a right to know if he's a rapist.

Sorry, being a rapist does not qualify as "a privacy issue."

All the more true when Hillary's tried to build a campaign on allegations about Donald Trump's actions with women.

Rape is not a minor charge.

That's one of the most serious charges that can be made.

It damn well deserves an answer.

And calling a woman's assertion that she was raped "divisive"?

And grasp for a moment: In 1992, accused of infidelity, Bill Clinton went on 60 MINUTES to deny the rumors.  Today, accused of rape, neither he nor Hillary will say it did not happen.


In Iraq, the war Hillary voted for and supported continues.

Now that Iraqi forces have just breached into the city of Mosul, we warn that this will decide not only the fate of 1.2 million Iraqis, but of the entire country.

"In the last weeks since the final Mosul operation started, we've seen thousands forced to flee their homes, families separated, many civilians injured and others killed by snipers or by explosive devices," said Country Director in Iraq, Wolfgang Gressmann. "We are now bracing ourselves for the worst. The lives of 1.2 million civilians are in grave danger, and the future of all of Iraq is now in the balance.

"People in and around Mosul have lived for almost two and a half years in a relentless, terrifying nightmare. We are now all responsible to put an end to it."

People trapped inside Mosul city and thousands displaced from surrounding villages are in desperate need of food, water and medicines. As the fighting intensifies in the streets of Mosul over the next hours and days, it will be more and more difficult for humanitarian aid and services to reach those in most need.

Since 17 October—the day the military operation to retake Mosul started—around 18,000 Iraqis were displaced from their homes. Many have fled to newly opened displacement camps that are quickly filling up and can house no more than 54,000 people at the moment, while more are being constructed. Since the start of the operation, we have supported more than 6,270 women, men, and children with emergency aid, education and psychosocial services.

"Beyond the basic aid for survival, the countries involved in this military operation are responsible for the future of Iraq," Gressmann said. "That means investing in Iraq's children, giving them back their childhood, and making sure they have a future to look forward to while being able to put behind them this dark chapter of horror and neglect."


QUESTION: Okay. Can you update us on Mosul? It seems that the Iraqi army has made its first foray into Mosul proper, the city.

MR KIRBY: I don’t know that for a fact, Said. I have seen some press reporting to that effect. I am leery, as you know, to get into battlefield updates here. But what I can tell you from what I have learned outside of press reporting is that they are making progress, that their campaign is actually ahead of schedule, and they continue to prosecute the fight against [the Islamic State] in and outside Aleppo. But exactly where they are, as you and I speak, I truly don’t know the answer to that.

MR KIRBY: That is a better question put to my Defense Department colleagues. I don’t have the order of battle in front of me or what specific air support the Iraqis are getting. It is – I mean, it is a fact that coalition air support has assisted the Iraqi Security Forces on the ground for many, many months, and that the coalition air power was always intended to be part and parcel of the Mosul operation. But exactly what that entails on a day-to-day basis, I just don’t have that information.

QUESTION: Because I just want to follow up on our thing yesterday, as far as air support and the civilian population and so on.

MR KIRBY: I’m not aware that we’ve received any reports or credible allegations of civilian casualties caused by Iraqi Security Forces or the coalition thus far in the campaign. Again, I would encourage you to speak to my colleagues at the Pentagon. They track those things, as they should, more closely than we do here at the State Department. I’m not aware of any allegations of civilian casualties.

And I would say, as I said yesterday, we – we, the United States military in particular – takes extreme care and precautions against trying to – against causing damage to civilian infrastructure or civilians in general. And when we think we’ve done it, we investigate it. And when we know we’ve done it, we own up to that. We put a press release out after the investigation is over. And if people need to be held to account for that, well, we hold them to account. And that makes – that – we hold ourselves to a pretty high standard – and a higher standard, I might add, than virtually any other military in the world. So I guess I just don’t know if there’s been any reports.

Those reports are never credible to John Kirby.


This morning, the US Defense Dept announced:

Strikes in Iraq
Attack, bomber, fighter and remotely piloted aircraft and rocket artillery conducted eight strikes in Iraq, coordinated with and in support of Iraq’s government:

-- Near Bashir, a strike engaged an ISIL tactical unit.

-- Near Beiji, a strike destroyed an ISIL supply boat and a weapons cache.

-- Near Sinjar, a strike destroyed an ISIL fighting position.

And during all of this, tensions between the governments of Iraq and Turkey continue.


Hayder al-Khoei ‏@Hayder_alKhoei  16h16 hours ago
#Iraq PM Abadi: we do not want war with #Turkey but, God forbid, if there is a confrontation the Turks will pay a heavy price. #MosulOps 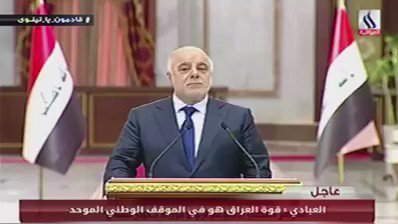 1:25
Hayder al-Khoei @Hayder_alKhoei
#Iraq PM Abadi: we do not want war with #Turkey but, God forbid, if there is a confrontation the Turks will pay a heavy price. #MosulOps
0 replies46 retweets38 likes