Sometimes that's paid off, sometime it hasn't.  One of his worst periods of rejection would be 1986 when rock critics just seemed out to get him.  Maybe it was "Love Touch"?  The film (LEGAL EAGLES) it appeared in was among the worst Robert Redford ever made -- and that's really saying something.  ROLLING STONE even savaged him for recording a song by the Beatles ("In My Life").  Didn't matter that he sung it to perfection.  "10 Days of Rain" was also perfection.  But there are periods -- as Carly Simon's explained -- where they're just out to get you ("but if you're willing to play the game, it will be Coming Around Again").  Joni Mitchell put it this way in "For The Roses:"


And they were ready to crucify Rod.  He hung in there and kept making solid music.  Then came the thyroid cancer, the need to re-learn singing and those American songbooks that followed.  Don't hate a torch song but really didn't need all of those songs from Rod Stewart, Mr. Rock and Roll.  I could enjoy the AC hits ("Bewitched, Bothered and Bewildered" with Cher and "I've Got A Crush On You" with Diana Ross) but I didn't need the albums that seem to be endless. 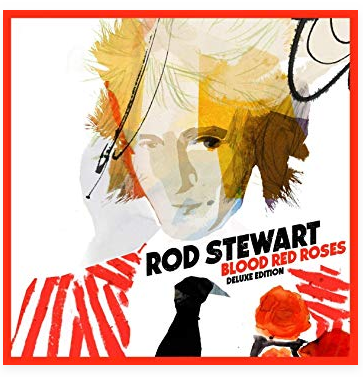 I liked it a lot on first listen.  But, as with the Rolling Stones' A BIGGER BANG and The Department of Eagles' IN EAR PARK, I love this album even more, even deeper, the longer I spend with it.

"The joint is jumping, the dee jay is setting them free," he sings in "Look In Her Eyes" which is a story song in the tradition of "Young Turks."

The joint is jumping; the DJ's settin' 'em free
Johnny from Brooklyn meets Marianne from Queens
They hit it off, he has all the moves
She's fascinated, but leaves him lookin' for clues
She's not pretending; it's just the look in her eyes
She's not suggesting; it's just the look in her eyes
He leads her by the hand
He says, "Dance, little sister, dance"
Is it one of those nights where the stars and the moon collide?


It's a driving, pounding song and the vocals nail it.  Rod produced the song with Kevin Savigar -- in fact, he and Kevin produced the whole album.  They also wrote the song together -- it's one of the nine they wrote together.  The album continues the strong work the two did on TIME and ANOTHER COUNTRY.  But it's better than both of those albums.

"Hole In My Heart" is another miracle.  This one recalls Mick Jagger and Carlos Alomar's "She's The Boss" from Mick's solo album of the same name.  Only the production and energetic vocals prevent it from turning into the five minute whine that "She's The Boss" was.  Energy also keeps the title track ("Blood Red Roses," remember?) floating.  "Rest Of My Life" finds him feeling love for the whole world and the drums get that point across rather cleverly.

The production really has to be noted, it's alive and attention is given to each track.  Carole King did that.  Once.  On TAPESTRY.  As Elton John pointed out to ROLLING STONE,  "With all due respect to Carole King, TAPESTRY was a great album, but the other two albums after that sounded like they were recorded at the same sessions but that Tapestry was the first ten tracks done and the next 20 were done when everyone was getting increasingly more tired."  The arrangements on TAPESTRY were inspired.  So what happened?  Because each album that followed got more and more routine.

Rod and Kevin have breathed life into BLOOD RED ROSES.  Each song has its own textures.  "Grace" is a wonderful ballad and the accordion is one of the instruments -- just one -- that adds a special accent to the song.  "Give Me Love" is rich in riffs and strutting bass.  And then there's "Didn't I?" which is a powerful song.


The Beatles' "She's Leaving Home" is a moving song and an inspired one.  As we go about our lives, we grasp that not all departures will result in happy -- or even just "okay" -- endings.  That's what this song is about.

That's another reason the album is so rich.  Rod's following the Carly Simon path.  He's not trying to be the eternal kid, the I've discovered sex for the first time.  That pose is tired and has been for decades -- as anyone who has listened to James Taylor can tell you.  In the 80s, Carly stood out from so many of her peers because she was willing to write from experience and not try to act like a 20 year old just embarking on life.


Rod's vocals in "Farewell" are great but so are the lyrics he gets to sing:

All dressed up on a Friday night
Getting drunk on cheap red wine
Two north London boys just out on the town
Catch a train up to cool Soho
The Marquee and The Flamingo
Pills and chills and girls in heels and Georgie Fame, yeah
Making out we were millionaires
Anything to get the girl upstairs
What was it you said, humour before looks works every time
Skinny ties and mohair suits
White boys can't sing the blues
This was our time, our space, our songs, our generation
And I'll never know again
Someone as genuine
Someone as wonderful as you
And I can't believe you're gone
That's why I wrote this song
Goodbye my old friend
I'll miss you, yes, I will
So long my best pal
I'll miss you, yes, I will
Oh you, yeah you
Were like a brother to me


This isn't just a great album, it's one of the year's best.  And every time I think I appreciate all the work that went into this album, I listen to it again and discover I love it even more.  If you're a Rod Stewart fan or just a fan of good music, this is an album you need to have in your collection.