Chris Hedges' AMERICA: THE FAREWELL TOUR bids adieu before the bags are even packed

Chris Hedges uncorked the crazy again this week.  I try to be nice to Chris.  He does not make it easy.  He attracts enemies the way protons attracts neutrons.

We were calling Chris out here -- one of the few to do so -- because of his reporting.  Though he's today's 'hero' and legend, he is also -- and will always remain -- the first to falsely link Iraq to 9-11.  It was Chris -- not Judith Miller -- who co-authored a front page NEW YORK TIMES article -- built around 'friendly' unnamed sources -- anonymice -- explaining that Saddam Hussein was linked to 9-11.  Weeks after 9-11, he put his name to the front page 'report' "A  Nation Challenged: The School; Defectors Cite Iraqis Training For Terrorism."

None of the article holds up.

But Judith Miller is a name the world knows and Chris Hedges . . .


We held him accountable and then backed off because Tom Hayden told me they'd destroy Chris because Chris -- his 2008 'crime' -- was not supporting a two-party candidate.  I have issues with Chris but I wasn't going to take part in demolishing him because of who he planned to vote for.

In 2013, and this does matter for this book review, Chris Lynn Hedges took it upon himself to define what rape was. 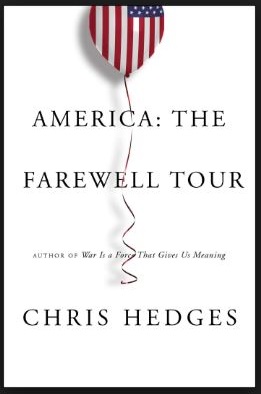 One of the biggest problems with his latest book AMERICA: THE FARWELL TOUR is that prissy Chrissy is a prig.  There are real issues in this world but Chris often can't find them because he's so damn busy 'defending' us all from 50 SHADES OF GRAY which he confuses with pornography.

50 SHADES OF GRAY, if I have the story right, started out as TWILIGHT fan fiction -- erotica.  I'm not anti-porn to begin with (Chris is) but I'm also not stupid enough to confuse erotica and pornography.  There is a world of difference.

Do I have problems with 50 SHADES?  Hell yeah.  The whole world knows -- or damn well should -- that the S&M relationship is about power and control and, yes, release.  Release.  It's that one word that explains why S&M male-female relationships tend to be with male subs and female doms.  Jerry Bruckheimer may not know much, but he does know that -- which is why his CSI got that -- at least that -- right.

Unlike Chris, I don't see the human body as pornographic.  I do, however, feel that fair is fair and, if woman are going to be naked for the enjoyment of some, then men should be as well.  There's nothing dirty or nasty about our bodies.  There's something very filthy about shoot outs and bombings used for entertainment.

In fourteen years online, I've never had to detail my thoughts on sex before.  I have to now because we're reviewing the book of a prig.  Chris does a chapter entitled "Sadism."  And he's obsessed with 50 SHADES OF GRAY in this chapter.  Apparently, a spanked bottom between consenting adults is now the greatest exploitation of the proletariat -- quick, someone get me a rewrite of THE COMMUNIST MANIFESTO!

That the man who revealed in 2013 how he didn't even know what rape was (yes, Chris, non-consensual fornication qualifies as rape) turns out also not to know what qualifies as 'spice' to some probably shouldn't be shocking.  (Though one's heart does go out to every woman Chris was ever with.)  But that he wrote this crap that confuses everything and grasps nothing, this nonsense that attempts to set himself up as the anti-porn voice and hero and put it in this book is certainly puzzling.  That he made it chapter four is even more so.

Let's face it, even in his best book (DEATH OF THE LIBERAL CLASS), Chris is not an easy read.  That's not because he's so much smarter than the rest of us, it's just because he can't carry a simple narrative.  So most people bail on a Hedges book long before the last page.  If he really felt the need to do a chapter on "Sadism," you'd think someone at Simon &  Schuster would have suggested he put it at the end of the book where most readers would ignore it.

He should have put it at the end because there's so much in the book worth reading.  There's also so much, in fact, that's "just add water."  He doesn't explore enough.  He rushes here, there and everywhere -- a giant gypsy moth flitting to and fro.  For example, he's concerned with art.  Specifically, he's concerned with art and commerce.  I shared his concern.  It's not a riddle for me to unravel.  I'm closer to the end of my life and, when I was searching for a good script, it was one that told a strong story and offered a female character that wasn't arm candy.  A number of us worked on that and the film world's a little better off domestically today as a result. (I said "a little better."  There are still many issues there to be addressed.)  It's late in life for me to start worrying about a new tactic for entertainment.


But when he finds a community where art can comfortably reside, where a song played live can be seen as filling a need, I share his interest in that.  Maybe I don't.  Maybe I'm more interested in it than he is?  Because I really think that should require an exploration but Hedges offers nothing but jottings.

I sometimes feel that way when I read WSWS as well.  When I'm reading comments and someone's yacking on uselessly (yes, I mean that) about how to 'fix' things.

What are you going to fix?  Take it from someone who fought the industry on sexism for decades, you're not going to change the industry.  You're best bet is to whittle it down -- shame it, name it.

But there you are, in the comments of WSWS, whining about how film focuses on capitalism or whatever.  I'm not saying it doesn't.  I am saying it's the 21st century, people, why are you whining?  You can make a movie on an iPhone.  Why the hell are you trying to influence a lethargic, corporate mindset instead of making your own films?

EASY RIDER has always bored the hell out of me. I love Jack Nicholson, he's a friend, but even he knows I've never made it through that self-indulgent film -- it always puts me to sleep.

But I can appreciate that it upended an industry in many ways for a brief time.

If WSWS readers want to 'change' the industry, the only thing that ever briefly alters anything is a hit.  So make a hit.

Or better yet, ignore the f**k out of the industry.  Make the films you want.  Agnes Varda's done that for decades.  She should have won the Academy Award this year (as the Russia hysteria fades, Varda's loss will be seen as one of the worst thefts in Oscar history).   Your answer should be:  Go outside the system completely.  Darren Aronofsky's PI is a great film.  It was made for $60,000.  Using a few iPhones and a group of like minded friends, a film could be made for virtually nothing.  And the comment section of WSWS could be used to promote these films.  Spark a discussion.

That's one idea, there are probably many other ones, many better ones.  But none of them -- not even mine -- make it into Hedges' book.

Some strong critiques make it into the book, to be fair.  But so much of what you read will have you wishing he focused on that (Trump's Taj Mahal casino -- and New Jersey's casinos in general which are disgusting and which are being replicated at Wal-Marts across the US -- like the casinos, Wal-Marts are less likely to fix a roof leak and more likely to just set out a bucket when it rains) and developed it.  As a book, AMERICA: THE FAREWELL TOUR really reads more like a book proposal.

That's especially true of the chapter "Freedom."  While I agree with his political commentary, it's a shame that this goes on and on for page after page (over 45) before getting to an actual issue (prison and the labor it provides -- slave labor) -- and that Hedges is done with the actual issue in less than 20 pages.  The prison issue could be an entire book.  And should be.

Other issues abound.  For starters, did no one in Chris' well-meaning and high-minded circle think to point out that the US is not America?  The United States is part of America, part of North America (as is Mexico and Canada).  There's also South America.  Reducing America to the US solely is not only myopia, it's also the height of chauvinism.

Back in September, I reviewed Sally Field's book and thought I'd grab the book by Chris next.  Then I read it and thought I'd be kind and just say nothing.  Then Elaine offered "I'm embarrassed for Chris Hedges" in October.  She was correct and she was funny and, as noted at THIRD, she was nudging me to review his book:

Jim: I'm asking because I kind of felt like, recently, Elaine was sort of prompting you to do so with a piece she wrote at her site.

Jim: I got that when I read it.

C.I.: You know, I've already trashed Seymour Hersh's book.  Is that what I'm going to do again?  Take on another 'lefty'?  Although in this case, the person is an actual lefty -- unlike Hersh.  I don't know.  I suppose I should.  He's just so irritating.  Why, as Betty was just noting, are so many of the lefty males who get promoted to hero status so unfortunate and irritating?

I was trying to ignore it and then Chris uncorked the crazy again.  Instead of dealing with the many real problems we have, he decided to play Chicken Little With a Crystal Ball this week.  Again, we have serious issues -- including the Iraq War -- which Chris helped sell on the front page of THE NEW YORK TIMES.  But instead he wants to alarm the world about what might happen.

If all the alarms that had gone off since Donald Trump was sworn in as president had resulted in any real fires, maybe he'd have a point.  Donald is not a great president.  I wouldn't call him a good president.  He does not meet my criteria and he does not address the issues that matter to me.  He is not, however, Bully Boy Bush.  Yes, there is worse than Donald Trump and, yes, the world has seen it -- the world.  All of this "sky is falling!" cries over and over turn people into the little boy who cried wolf and no one's going to believe you when there's a real crisis because you've repeatedly misled them.

If Chris hadn't pulled that nonsense this week, I'd still be ignoring the book.  But he did.

And it's part of why his book is so bad.  Now he's entitled to write whatever kind of book he wants -- and we're entitled to respond however we want.  And he can be a prig all he wants.  But he appears to want to influence people.

If that's the case, drop the cries of Chicken Little.  Also, if that's the case, when you write a book, stop trying to run readers off with your anti-sex rants because nobody wants to hear it.  There's a reason that The United Society of Believers in Christ's Second Appearing -- aka the Shakers -- fell even quicker than they rose -- people like sex.  Celibacy is not going to work -- ask a Catholic priest -- for most people.  And your anti-sex rants aren't going to persuade anyone to listen to anything of actual importance you might have to offer.