Friday, May 10, 2019.  Stolen goods on FACEBOOK, ex-prime ministers plotting to return to power and so much more.

A major bombing in Baghdad yesterday.  AFP reports, "At least eight people were killed and 15 wounded in a suicide bombing at a market in eastern Baghdad on Thursday, a security official said. It was later claimed by the Islamic State (ISIS)."  AP adds, "Hakim al-Zamily with the Sadrist political movement, which enjoys wide support in Sadr City, said lax security was to blame and that IS cells are taking advantage of slackened security measures in Baghdad."  It was a suicide bomber so that's actually nine deaths.  It's a major bombing and a major refutation of the false claim that ISIS has been defeated.  Which explains -- though it doesn't justify -- why the Iraqi government tried to lie about the bombing.  Margaret Griffis (ANTIWAR.COM) notes, "Baghdad Operations Command confirmed the bombing at first, but later claimed that the explosion was controlled and injured no one."  Hard to successfully lie about this when the governments of both Kuwait and Turkey have condemned the attack.  XINHUA notes, "The attack took place at rush time in the evening just after Iftar meal, or the break of the daylight fasting in holy month of Ramadan."

ISIS?  Is it going to be the excuse to keep US troops in Iraq?  So far, it has been.

At what point is the Iraqi government expected to defend itself from ISIS?  This is the (US-installed) government, remember, that let Mosul be occupied for 3 years.

On the topic of US troops in Iraq, ALSUMARIA reports that US Senator Marco Rubio has screwed up again.  He's stated there are 50,000 US troops on the ground in Iraq.  Are there?  Could be.  If there are, Marco wasn't supposed to tell.  If there aren't, too late, he's created an international incident.  Iraqi MP Sabah al-Taloubi is calling for the Iraqi government to clarify and states if Marco was accurate, that is a problem for Iraq.

Kata'ib Hezbollah & Asaib Ahl al-Haq are Shia militias equipped,trained & directed by #Iran’s IRGC. If they attack our 50,000 U.S. personnel and/or our facilities in #Iraq it should be considered no different than a direct attack by Iran.
291 replies514 retweets1,128 likes

Marco's statement was, "If they attack our 50,000 US personnel and\or our facilities in Iraq, it should be considered no different than a direct attack by Iran."  Now most likely Marco is including embassy staff, etc.  The 50,000 personnel is not supposed to be the number of troops.  But he wasn't clear and that falls on him.  Tensions are high in Iraq currently and a US senator making statements that are inflaming is already causing problems before you factor in that these statements are intended for Iraq and most Iraqis do not speak English.


There is a strong push for war with Iran and Marco is part of that push so maybe his 'mistake' isn't really one?

Also worth contemplating is Nouri al-Maliki's recent reaction.  Former prime minister and forever thug Nouri has always been close to Iran.  That's not a bad thing in the abstract.  Iran shares a border with Iraq.  The two countries need to get along and often do.  But note this report from NATIONAL IRAQI NEWS AGENCY:

The head of the state of law coalition, Nuri al-Maliki confirmed the importance of keeping Iraq out of any regional or international conflict and respect its sovereignty.

A statement by Maliki's office quoted him as stressing during a meeting with US Assistant Secretary of State for Near East Affairs David Satterfield, the "importance of strengthening bilateral relations between the two countries," noting that "Iraq adopts bilateral relations with the countries of the world, and meet common challenges. "

He stressed "the importance of keeping Iraq out of any regional or international conflict and the need to respect its sovereignty, and adopt the dialogue approach to resolve all crises and conflicts, and that Iraq is not a starting point to attack others."

The meeting reviewed the strategic partnership relations between Iraq and the United States and the mechanisms of enhancing joint cooperation. He also discussed the issues and challenges in the region, the efforts to reach political solutions to them, as well as the efforts to fight terrorism.

In turn, Satterfield praised the relations and joint work done during the time of Maliki's premiership, praising his great role in developing bilateral relations.

Reading the above, two things stand out.  First David Satterfield is quite the whore.  Nouri is a thug.  He should be in prison.  He steals the money of the Iraqi people, his persecution of them created the conditions for the rise of ISIS, the list of his crimes are many.  But there's David playing footsie with him.  Second, Nouri clearly wants to be prime minister again.  In fact, he wants to be it right now.

If you're not getting what's going on, you missed the limited roll out by empire functionary -- that's why he's friends with Thomas Friedman -- Robert Fisk.  Fisk isn't a reporter, he's a pretender.  He pretended to care about Iraq and then ran from it even while details were emerging about the murder of the woman he claimed was his friend.  Whatever, Robert.  A few days ago, he had a report on Hayder al-Abadi.  Who?  Exactly.  Hayder is the worthless puppet that followed Nouri.  He vowed to end corruption, he never even tackled it.  Barack Obama installed him as prime minister.

The international press told you he was wonderful -- remember, empire building takes a lot of whores.  He wasn't wonderful and that's why he lost the election that was supposed to be a sure thing according to the international press.  It's funny how the international press, time and again, fluffs for a Nouri or a Hayder -- or whomever the US installs.  You'd think they listen to the Iraqi people but they don't, do they?  Which is why they have egg on their faces over and over.

So Robert showed up to feign interest in Iraq but really to do the roll out for Hayder's attempt to return as prime minister and  it's a rah-rah piece that ignores facts such as the people of Iraq didn't want him, other politicians like movement leader and Shi'ite cleric Moqtada al-Sadr didn't want him.  But if Robert Fisk had to be weighed down by facts, he'd never achieved the tiny bit of fame he has -- or rather had.  You can only milk I-spoke-to-bin-Laden for so long.  Especially when the bulk of your over-praised commentary (passed off as reporting) really offered so damn little.


Reality tends to emerge -- slowly, but it does emerge.  Even for Donald Trump who appears to have discovered that John Bolton, swinger though he may be, is no one to listen to.

Trump lost confidence Bolton who suggested it was going to be an easy task to overturn revolutionary process in Venezuela & return the nation back to the oligarchy. But just look at the freaks outside embassy in D.C. & you can see why the people have resisted that element.
10 replies105 retweets269 likes


Pity President Donald “America First” Trump, Secretary of State (and former CIA Director) Mike Pompeo, National-Security Advisor (and Cold War fanatic) John Bolton, and Special U.S. Representative to Venezuela (and Cold War fanatic) Eliott Abrams. Knowing that the American people have grown weary with their forever wars in Afghanistan, Iraq, Syria, Libya, and Yemen, these four interventionists can’t decide whether to initiate a new war against Venezuela or against Iran or against both. They just know that they want a new war, an exciting war, a winnable war against a poor Third World country, a war that will cause Americans to forget about the ongoing fiascoes in the Middle East and Afghanistan and that will hopefully restore America to greatness through “mission-accomplished” conquest, bombing, death, destruction, and regime-change. One can easily imagine the arguments that must be taking place in the White House: “Iran! They ousted our Shah from power!” “No, Venezuela! It’s part of the worldwide communist conspiracy to take over America!”
Ideally from their standpoint, the choice will be made easier for them if either Iran or Venezuela strikes first. After all, let’s not forget that the Constitution, which is supposedly the law of the land, requires a congressional declaration of war before the president and his army can wage war. Moreover, after World War II, the Nuremberg War Crimes declared it to be a war crime for one nation to initiate an attack on another nation.


In other news, the war that has destroyed Iraq has been wonderful for those who want to steal antiquities and who want to profit from stolen goods.


Along with AL-MONITOR's video report above, there's the reality that FACEBOOK is a tool for stolen goods as well.

Researchers say looted antiquities from Iraq, Syria and elsewhere in the Middle East are being offered for sale on Facebook
24 replies79 retweets112 likes

Ancient treasures 'looted by ISIS' are being 'offered for sale on Facebook', researchers have claimed.
Professor Amr Al-Azm, who teaches Middle East history and anthropology at Shawnee State University in Ohio, said there are at least 90 Facebook groups and tens of thousands of members linked to the illegal trade.
ISIS stole from historical sites as its so-called caliphate spread across the Middle East, with it also granting other raiders access for a 20 per cent tax.


Iraq is beset with problems and they're stuck with one ineffectual prime minister after another.  Moqtada al-Sadr offers more reality than all the ex-prime ministers combined. 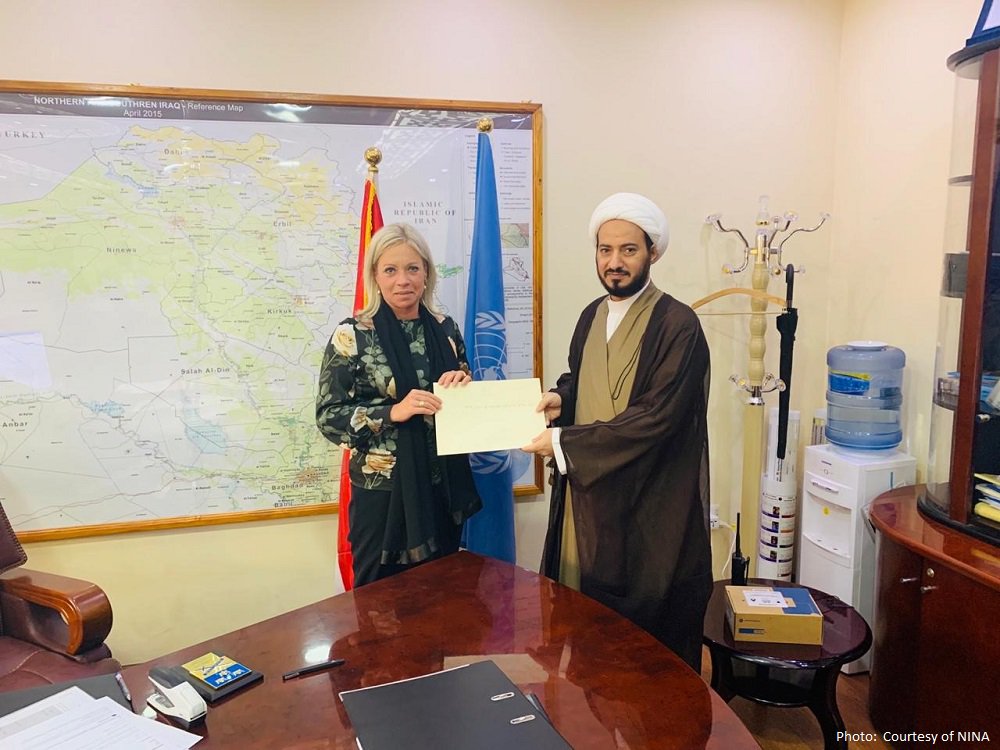 UNAMIVerified account @UNIraq
On 6 May 2019, the Special Representative of the United Nations Secretary-General for #Iraq, Ms. Jeanine Hennis-Plasschaert, met in #Baghdad with the Head of the Reform and Reconstruction bloc in the Council of Representati…
0 replies2 retweets7 likes

UNAMIVerified account @UNIraq
On 6 May 2019, the Special Representative of the United Nations Secretary-General for #Iraq, Ms. Jeanine Hennis-Plasschaert, met in #Baghdad with the Head of the Reform and Reconstruction bloc in the Council of Representati…
0 replies2 retweets7 likes

In the US, the presidential election will take place in 2020.  There are six women seeking the Democratic Party's presidential nomination.  Some are raising serious issues.