Monday, May 6, 2019.  The US prepares to bury another service member who died in Iraq, co-president of the United States Marco Rubio issues a proclamation, and much more.


Today, a US service member will be laid to rest.  Alexia Walters (LEX 18) reports:


The funeral for a soldier who died while serving in Iraq will be held Monday in Madison County. It follows a day of mourning, as family and friends gathered for the visitation for Specialist Ryan Dennis Orin Riley at the Richmond Church of Christ on Sunday.
According to the Department of Defense, the 22-year-old died while serving in Iraq in a non-combat related incident.
Family and friends say they’re devastated, but they’re holding on tight to their memories of Riley.

Why, in the United States, do we not have politicians who can actually lead and end these wars?  We're in yet another endless presidential election cycle and where are the leaders?

Betts J. Gorsky is concerned about the voters and writes THE PRESS HERALD:

L.D. 211, “An Act to Open Maine’s Primaries,” is a common-sense proposal that would improve our electoral process by boosting civic engagement and increasing voter turnout, especially among young voters and veterans, many of whom have not enrolled in any political party. I encourage all voters to support this reform.
I strongly believe that democracy works best when more people are encouraged to participate. Maine’s closed primary law expressly prohibits 35 percent of registered voters from participating in primary elections because they have not chosen to become part of a political party. This is particularly discouraging for young voters. Fifty percent of millennials “describe themselves as political independents,” according to Pew Research, and, as such, are disenfranchised by our closed-primary law.
Maine is one of only 11 states with “member-only” elections that limit participation in primary elections to voters who register with a political party. Voters who have lived in other states are even more likely to be stymied by our “closed primaries” system. This inconsistency disproportionately impacts those voters, such as veterans, who move states frequently. Similar to millennials, 49 percent of Iraq and Afghanistan war veterans aren’t enrolled in either major party and so are disenfranchised by Maine’s current closed primary law.


Where are the leaders?  Kevin Hardy (DES MOINES REGISTER) reports:


Campaigning in Iowa on Sunday, U.S. Sen. Bernie Sanders sought to distinguish his legislative record from that of former Vice President Joe Biden.

At a town hall event in Spencer, a woman in the crowd told the Vermont senator that she was trying to decide between Sanders and Biden.
"I like what I heard today," she said at the Clay County Regional Events Center. "How are you different than Biden?"
Sanders smiled and promised to "answer that in a couple ways."

Bernie Sanders is clearly a leader as is US House Rep Tulsi Gabbard.  Joe Biden?  Not so much.
Isaiah's THE WORLD TODAY JUST NUTS "Joe Biden discovers his voting record" went up last night. 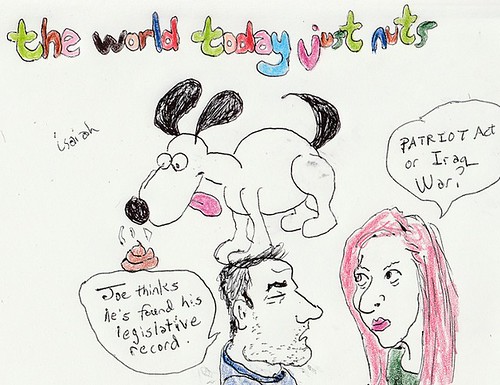 Even if Obama openly endorses him at some point, Biden has his own record, and it’s that of a consistent corporate stooge. particularly of the real estate and banking industries, and as one of the architects of the mass incarceration state.
Joe Biden didn’t just cast a vote for the 1994 Violent Crime Control and Law Enforcement Act , also known as the Clinton Crime bill. Joe Biden wrote the bill, including but not limited to provisions that created


Biden’s bill resulted in a spike in mass incarceration which of course affected African American and Latinx communities more profoundly than any others. The damage to families and lives of course continues today.


For many years, Joe Biden was known as the Senator from MBNA, the giant credit card entity that was bought by Bank of American in 2006 and re-sold to Lloyd’s Bank UK in 2016. Biden was responsible for the provisions that made it impossible to discharge student debt via bankruptcy, thus shackling millions of people with ballooning student debt that lasts till their forties and fifties. Student debt of course weighs heaviest upon black women.


Joe Biden is an unwavering supporter of apartheid Israel, just like his buddy Barack, and an unrepentant warmonger like just about all of his Democrat colleagues in the House, the Senate, and among presidential candidates. Until Biden’s entrance, Bernie Sanders was the clear Democratic front runner. That’s over. The polls haven’t broken Biden’s black support by age, but it’s safe to assume that Bernie still leads among younger black voters, while Biden’s voters tend to be older.

Millennials for Revolution  🌹‏ @Bernlennials May 2
Joe Biden’s embrace of war criminal Dick Cheney shows that he lacks the moral compass to be POTUS. Bernie Sanders voted AGAINST the Iraq War when it was unpopular to do so, demonstrating true moral leadership. #Bernie2020 #NeverBiden #NoJoe2020
9 replies43 retweets110 likes
Show this thread

Joe Biden is a scary politician.  He's not the only one.  Check out the kook from Florida.

Marco Rubio‏Verified account @marcorubio 2h2 hours ago
We will not distinguish between attacks from Shia militias in #Iraq & the #IRGC that controls them. Any attack by these groups against U.S. forces will be considered an attack by #Iran & responded to accordingly.
462 replies457 retweets1,300 likes

Armed actors not under state control are one of the greatest threats to Iraq in the post-ISIS phase, argued a top US Department of State official on Thursday.
"To ensure durable stability, we must support Iraqi-led efforts to bring undisciplined armed actors that are not under the control of the state under full state control," said Denise Natali, the assistant secretary for the Bureau of Conflict and Stabilization Efforts.
She was speaking at an event at the Washington, D.C.-based think-tank Hudson Institute on Post-ISIS Stabilization and Reconstruction in Syria and Iraq.
Militias through the conflict with the Islamic State (ISIS) had strong links to Iran-backed groups and their loyalty to Baghdad has been a question for successive prime ministers — Haider al-Abadi and now Adil Abdul-Mahdi.


Militias are not the biggest threat, Marco Rubio is.  And his remarks come as JSA reports, "The Trump administration is deploying air and sea strike forces to the Middle East in response to what it described as “troubling and escalatory indications and warnings” from Iran."

Special Representative of the United Nations Secretary-General for Iraq Jeanine Hennis-Plasschaert extended on Monday her greetings to all the Iraqi people, particularly Muslims, on the onset of the holy month of Ramadan.
"Ramadan is a month of peace and reflection, where families and friends get together. It is when Muslims give and forgive, turn their thoughts to the less fortunate and those who are suffering," Hennis-Plasschaert, who also heads the UN Assistance Mission for Iraq (UNAMI), said in a statement.
Hennis-Plasschaert said that she, in particularly, sympathizes with "those Iraqis who live in the holy month without their loved ones who lost them in the conflict or who are waiting for the return of the missing. We feel for those who remain displaced, living in camps or unable to return home," according to the statement.