Sixteen years into this wave of the Iraq War and success!  No, kidding.  Just more failure.  The latest sign of how poorly the never-ending war is going?  The US Embassy in Baghdad issued the following:


Event:  The U.S. Embassy in Baghdad advises all U.S. citizens of heightened tensions in Iraq and the requirement to remain vigilant.
Actions to Take:


Nothing spells success for the US government like an advisory that US citizens "do not travel to Iraq."

The New York Times‏Verified account @nytimes 6h6 hours ago
The commander of the Syrian Democratic Forces said he hoped American troops would stay in Syria, pointing to the American departure from Iraq in 2011, which was followed by the rise of Islamic State. “They must not make the same mistake,” he warned.
35 replies81 retweets171 likes


No surprise that the nonsense would appear in THE NEW YORK TIMES -- no outlet did more to sell the Iraq War.  No, Judith Miller was not the only one selling it at that paper.

The US departure in 2011 did not allow for the rise of ISIS.  Nouri al-Maliki is responsible for that.  The Iraqi people saw a crazed tyrant and they turned out, in March 2010, to vote him out as prime minister.  The election was in March.  When did Iraq get a prime minister that year?  November.  Why?

Because Nouri refused to step down and idiots like the then-US Ambassador to Iraq Chris Hill, idiots like Samantha Power and idiots like Susan Rice advised Barack Obama that Nouri was their guy.  Idiot Barack went along with it.  Instead of insisting that Nouri honor the democratic election results, Barack tasked US diplomats with negotiating The Erbil Agreement which nullified the will of the people, set aside the actual vote and gave Nouri a second term.

Nouri is responsible for the rise of ISIS.

As for the ridiculous Syrian Democratic Forces?  Uh, aren't you fighters?  Why do you need the US to breast feed you?  Are you not able to stand up on your own?

Barack had the US fighting ISIS and al Qaeda in Iraq while supporting it in Syria.  That's a policy screw up that he will never escape.

On the topic of ISIS, RT has a documentary about what life was like under ISIS in Iraq.

Iraq’s Hashd Shaabi volunteer forces announced on Sunday a plan to redeploy in Nineveh governorate.
A commander in the Hashd, which is also known as the Popular Mobilization Forces (PMF), Raed Al-Karawi, said the PMF is to redeploy across the governorate, noting that coordination with the Iraqi army and security forces are going on.


This move takes place as Nineveh has a new governor.  RUDAW reports:


The Nineveh Provincial Council elected Mansour Marid as its new governor on Monday.

He is from the Ataa Movement that confirmed the news.

The 39-member provincial council voted him in with 28 votes.

The political group is close to the Hashd al-Shaabi and Iraqi National Security Advisor Falah al-Fayyadh.

How long Mansour Marid will be in office is anyone's guess.  If the past is any indication, he's highly likely to be removed from office as happened to his immediate predecessors Nawfal Hamadi and Atheel al-Nujaifi.  Nujaifi was kicked out by the Baghdad-based central government because Mosul was seized by ISIS.  That was the excuse, anyway.  Two years prior to that, Nouri al-Maliki was trying to remove Atheel from office.  Ramadi, Mosul, Falluja, etc. were seized by ISIS and the person sacked for that was the governor of Nineveh?  Not the prime minister of Iraq?

RUDAW notes there was an effort to stop the vote:r.

Doubts over the Council’s ability to elect a new governor are rife. The Council, whose role includes overseeing governorate budget plans, itself faces accusations of corruption following an investigation launched by Iraq's Integrity Commission, with many calling for its dissolution. It was found that nearly $64 million from funds allocated for reconstruction projects had been embezzled.

In the run up to the vote that was supposed to take place in an Iraqi parliament session on May 2, a video statement was released by a group of Nineveh MPs, which said "Our people in the province of Nineveh are awaiting the decision of the Iraqi parliament to dissolve, members of who directly or indirectly deliberately caused in wasting funds or stealing them on part of the local government."

But parliament allegedly removed the vote on the fate of the Council from its agenda, much to the MPs' dismay.


Mustafa Habib details other issues with the election.

Mustafa Habib‏ @Mustafa_Habib33
Now, Moqtada al-Sadr calls the president and the prime minister to intervene to resolve the crisis by dismissing members of the provincial council (4) 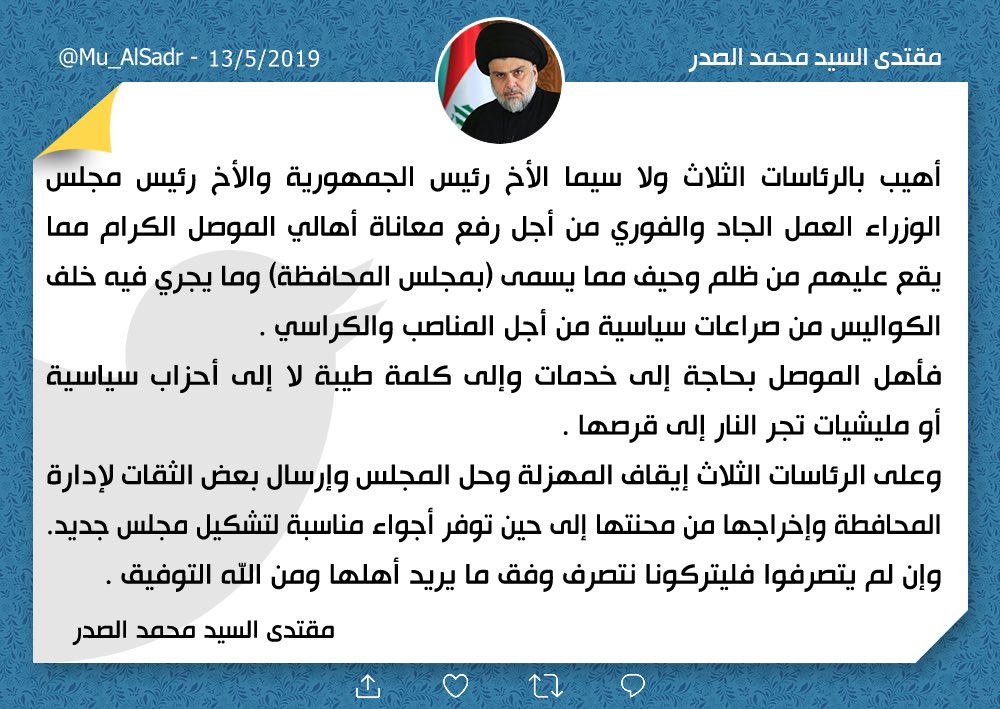 
We'll close with some Tweets from former US Senator Mike Gravel who is seeking the Democratic Party's presidential nomination: