20 Dictators Currently Supported by the U.S.


20 Dictators Currently Supported by the U.S.

By David Swanson
https://davidswanson.org/20dictators/
New book on 20 dictators whom the U.S. government currently arms, trains, and funds, renders ridiculous debates about dictators whom U.S. politicians praise or speak to. 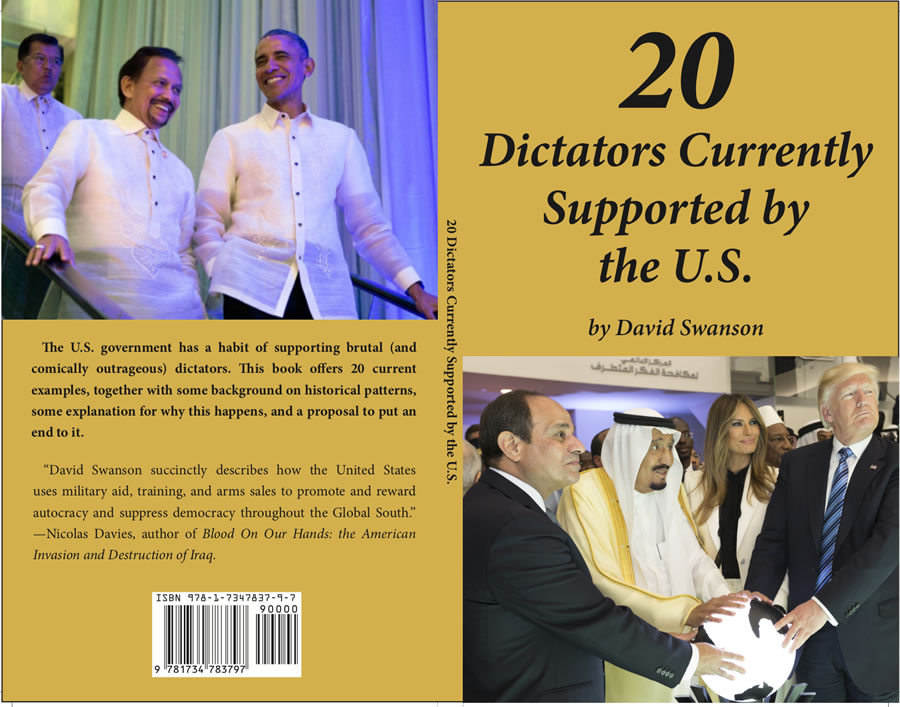 The U.S. government has a habit of supporting brutal (and comically outrageous) dictators. This book offers 20 current examples, together with some background on historical patterns, some explanation for why this happens, and a proposal to put an end to it.
As documented here, the U.S. government arms, trains, and funds all variety of oppressive governments, not just dictatorships. The choice to focus on dictatorships in this book was not made merely to shorten the list. Rather, that choice was made because the U.S. government so often claims to be opposing dictators through the promotion of democracy. Frequently, the atrocious conduct of a dictator is a central selling point for a new war or coup or program of sanctions.
Yet neither Saddam Hussein’s horrific (though fictional) removal of babies from incubators nor Manuel Noriega’s cavorting in red underwear with prostitutes while snorting cocaine and praying to voodoo gods (as the New York Times solemnly informed us on December 26, 1989) rivals the moral horror or the glorious goofiness of the 20 tyrants described in this book.
No one will be able to read this and believe that a primary purpose of U.S. foreign policy is to oppose dictatorships or to promote democracy. If it is important to you to try to believe that, you’ve probably already stopped reading.
“Swanson’s book of dictators contains names of heads of governments that few have ever heard, much less their brutal treatment of their citizens. Swanson exposes the abject duplicity of the U.S. administrations of both political parties that champion human rights, then sell weapons to the abusers of those rights.” —Ann Wright, co-author of Dissent: Voices of Conscience.
“David Swanson succinctly describes how the United States uses military aid, training and arms sales to promote and reward autocracy and suppress democracy throughout the Global South.” —Nicolas Davies, author of Blood On Our Hands: the American Invasion and Destruction of Iraq.
“David Swanson provides a shattering expose of United States empowerment of unsavory dictators around the globe, describing how the U.S. often sells arms to both sides in foreign wars and supplies military training and support to the armies of many dictator-led nations. Swanson’s important fact-filled book provides a stunning and detailed rebuke of the military-industrial-academic- media complex that is strangling our democracy, entwined and invested in the profits to be made by inciting perpetual wars. A must-read wake up call for the nation and the world to come to grips with these undemocratic and self-defeating policies!” —Alice Slater, Member of Board of Directors of World BEYOND War, UN NGO Representative of Nuclear Age Peace Foundation.
“David Swanson’s research illustrates the pattern of U.S. tyranny through propping up dictators around the world. This book calls the bluff on the hubris of some of the U.S.’ most common excuses for invasion and war. The clarity of the track record is shocking. Fortunately, Swanson offers a glimmer of hope in the form of one solution in the works.” —Rivera Sun, author of The Dandelion Insurrection.
“This book methodically exposes what U.S. foreign policy is supporting around the world (hint: it isn’t democracy) and offers an opportunity for course correction to get America moving in the direction of peace and human rights.” —Stacy Bannerman, author of Homefront 911: How Families of Veterans Are Wounded By Our Wars.
Get a personalized, signed-by-the-author copy mailed to you right away by donating $50 or more (or signing up to donate $5 or more a month) and emailing me your name, address, and instructions or by sending a check made out to David Swanson to: David Swanson 513 E Main St #1484, Charlottesville VA 22902 USA. Or just buy a copy now:
Buy the PDF.
Buy the EPUB.
Buy the MOBI.
Buy a Zip folder with PDF, EPUB, and MOBI.
Order the paperback from your local bookstore.
Buy the paperback on Barnes & Noble, Amazon, or Powell’s (coming soon).
Get a big discount on orders of 10 or more paperbacks (this can include copies of this and my other books). Be sure to let me know how many of which books and where they need to be shipped, and I’ll let you know the cost.
You can also get the PDF, EPUB, and MOBI from ebookit.
Share this book on Facebook, Twitter.