Yet again, the neoliberals are out for war and eager to send other people's children off to die.  The Center For Progress is getting it's war on as we noted in Wednesday's snapshot.  And then there's Zaid Al-Ali.

He did such a bang up job working in Iraq (that's sarcasm) that he's decided he's an expert.


He has an insipid column that was apparently too pathetic for even THE GUARDIAN to run so he took to ALJAZEERA.  Here's a typical passage:

Analysts and commentators in various parts of the world claimed that Mosul's population took sides in the conflict, throwing their lot in with ISIL. A video was widely circulated on social media, supposedly showing Mosul's inhabitants stoning Iraqi army vehicles on their way out of the city - never mind that the video was actually from Sadr City in 2008.

Second sentence first: Social media is global.  Not everyone speaks or reads Arabic.  It is very easy for a posted video to be shared with unintentional misrepresentations on social media.  I really have no idea what point the idiot thought he was making with that.

It's a paragraph in a September 2015 column by Joost Hiltermann of the International Crisis Group.

A word on the International Crisis Group.  Early on, we were asked to note them by someone inhouse there and I blew it off.  We ignored them for probably the first three years.  As coverage on Iraq in the west continued to dwindle, we began to cite them.

In a perfect world, we probably would never have.  Their larger goals are in conflict with my own concepts of peace.  So I'm not a fan.

I know Joost only through his public writing.


In Iraq, Prime Minister Nouri al-Maliki’s autocratic tendencies and sectarian-imbued repressive policies further alienated a Sunni population that, as soon as the opportunity presented itself, threw in its lot with the Islamic State (IS), despite the latter’s brutal rule. Iran could have acted to moderate Maliki’s behavior but neglected to do so, content that a friendly Shi’ite Islamist coalition ruled a neighbor that, barely a generation ago, had launched a destructive eight-year war against it. The Iraqi army’s collapse in the face of Islamic State’s advance in June 2014 created a security vacuum that Iranian military advisers have tried to fill by commanding urgently mobilized Iraqi Shiite militias. But what will the proliferation of such militias do for the unity of the Iraqi state, which Iran claims to want to preserve? The country’s breakup into warring fiefdoms is now a more likely scenario.

Iraq is not his focus in that column.

From his other writing does he believe the Sunni population in Iraq acts in unison?

From his other non-Iraq writing, does he believe any group of people act in unison 100%?

He was writing on another topic, Iran, and he did a short cut.

I do short cuts here and hear about it.  "You say THE NEW YORK TIMES reported in September of 2012 that Barack Obama sent Special-Ops back into Iraq but there's no link because it didn't happen!"

No, there's no link because I'm not here to spoon feed you.

Check it out, we've linked to that report over 570 times since it first ran.

There's the fact that Barack sent a brigade of Special-Ops in during the fall of 2012. Tim Arango (New York Times) reported, "Iraq and the United States are negotiating an agreement that could result in the return of small units of American soldiers to Iraq on training missions. At the request of the Iraqi government, according to General Caslen, a unit of Army Special Operations soldiers was recently deployed to Iraq to advise on counterterrorism and help with intelligence."


So after 570 times linking to it when I'm mentioning it in passing to make another point I'm still required to link to it?  A five year old article that was outright ignored in real time but that we covered in real time and that we have linked to over 570 times since?

Sorry, I don't have that time or kind of space.

Joost took a short cut because he wasn't writing about Iraq.

Zaid Al-Ali lies outright which is a wrong.

Yes, there are Sunnis who support the Islamic State -- Sunnis in Iraq.

Sorry, that's reality.  If you can't deal with it, stick with lying, Zaid Al-Ali.

The majority position of Sunnis in Iraq as the Islamic State began rising was: It's not my fight.

That was conveyed in social media as well as in strong journalism done by NPR and other outlets.

The Sunnis were being persecuted by Nouri al-Maliki.

The Islamic State rises up in response to Nouri.

Nouri had made clear that Sunnis were not part of his vision of Iraq.

It wasn't their fight.

There were some Sunni Iraqis who were against the Islamic State.  They were quoted in real media early on.  They saw it as a foreign effort (the Islamic State) and read it as an incursion in the way Iraqis see Iran's attempts to expand their border (I'm referring to cartography here, not political influence -- though it doesn't get much western media attention, Iran is frequently seen as attempting to redraw the actual border it shares with Iraq).

There were some Sunni Iraqis who were horrified by what they knew of the Islamic State and were against them for that reason.

But there were some who supported them.

And you have to remember when they rose up -- it's not a fact that the western media ever gets correct because it would require them confessing to their own failure.

Iraqis had been peacefully protesting for over a year -- demonstrations and sit-ins.

And the western media that built up the Eygpt protests as the great change in the world (didn't turn out that way, did it?) ignored the protests in Iraq.

Ignored it as Nouri used the Iraqi forces to attack the protesters.

Ignored it as Nouri used the Iraqi forces to attack journalists covering the protests.

Ignored it as Nouri used the Iraqi forces to kill the protesters.

As this became the reality and Nouri began threatening the peaceful protesters blocking the road between Baghdad and Falluja, as he began calling them terrorists and speaking (publicly) of setting them on fire, that's when the Islamic State goes public.

They are the black garbed figures that show up with guns to protect those protesters.

In their earliest public form, that's what they were -- defenders of the Sunni population who protected the peaceful Sunni protesters.

And they did protect them.

Nouri didn't kill them on that road the way he did elsewhere.

And that's why there were some Sunnis who saw them in a better light.

That probably would have continued for some if the Islamic State had not decided it should take and hold areas.

Once it did that, it was not just extremely fundamental, it was also corrupt.

As a movement (that resorted to violence), it could have had some success in the region.

We are speaking in political terms.  Do not e-mail me saying, "You said ISIS was successful or would have been successful and I don't think it's a success to enslave people!"  A movement's success is based upon it's ability to spread.  Even with limited violence, ISIS could have spread it's movement.  For those who recoil at that notion and insist that bombing is not an answer, I didn't say it was.  I'm referring to their movement.  For those who insist that Iraqis would recoil from violence, a number of people do not recoil in any area of the world.  Some do, some don't.  There is not a universal response.  Equally true, bombing is a daily fact in Iraq today -- including the daily bombs US war planes drop on Iraq.

As a governing force, it was always going to be doomed.

It couldn't manage a co-op, let alone a city.

And it's idealization was not even met within its own ranks so attempting leadership of a city was always going to expose hypocrisy and corruption.

But had they not started seizing territories in Iraq, they might have been able to have succeeded as a movement.

If they are defeated in areas that they hold in Iraq, they could go back to attempting to be a movement only.  However, since they attempted to expand and their expansion was destroyed, they'll always be seen as failures who scaled back to smaller goals and that would hurt success in the immediate future.  (Though the narrative, how it plays out, over ten or so years could lead to a revival.)

Zaid Al-Ali is slobbering over the 'success' in Mosul.

No one's looked so stupid since   that October State Dept press briefing when a journalist termed it a "slog" and CNN's Elise Labott screeched "NO!"


123 days ago, the operation to liberate or 'liberate' Mosul started.


The International Organization for Migration notes today, "As military operations to retake Mosul intensify, concerns mount that these operations may displace additional tens of thousands of civilians – beyond the 160,000-plus individuals currently categorized as 'displaced' in the Mosul region after four months of combat."  While RUDAW reports:


Oxfam International Director for Iraq Andres Gonzalez visited Rudaw's office in Erbil to discuss the next phase of the Mosul operations and warned of the looming humanitarian crisis which could affect 750,000 civilians as military operations target the western part of the city .

“Oxfam is calling on all armed forces to avoid the use of heavy weapons in populated and built up areas, including mortars and artillery, and to provide genuinely safe escape routes to avoid the high number of civilian casualties seen so far,” Gonzalez said this week.

Jean-Marc Mojon ‏@mojobaghdad  Feb 15
Siege conditions in west #Mosul: residents say they eat once a day and expect it to get worse @AFP https://goo.gl/CjYyDL  #Iraq 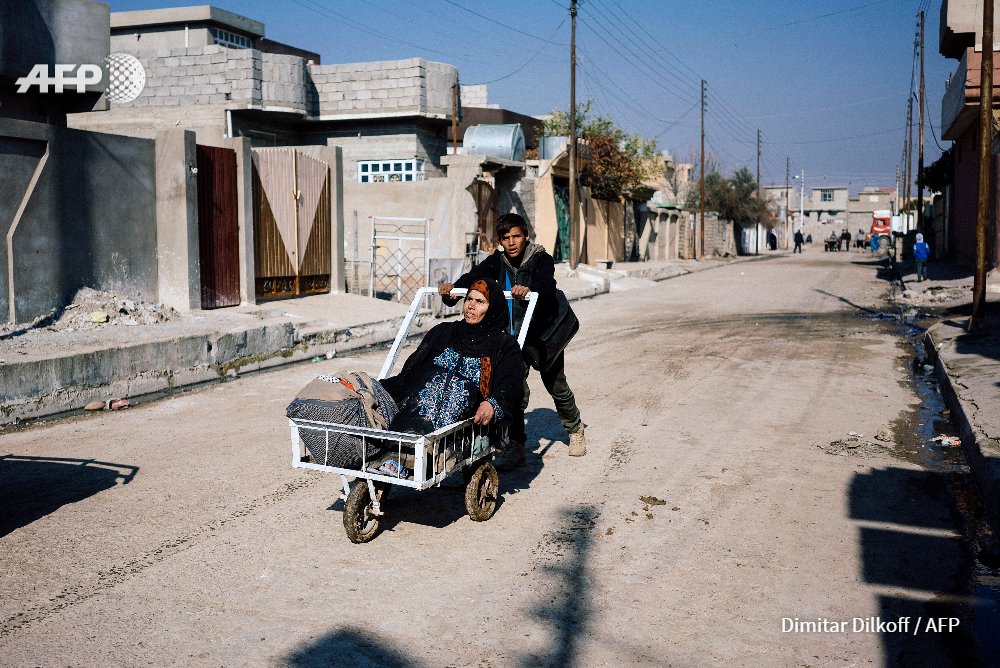 
That's not a success.


It's The Mosul Slog.

And this Tweet from Brett McGurk this morning touches on other issues Zaid Al-Ali's ignoring. 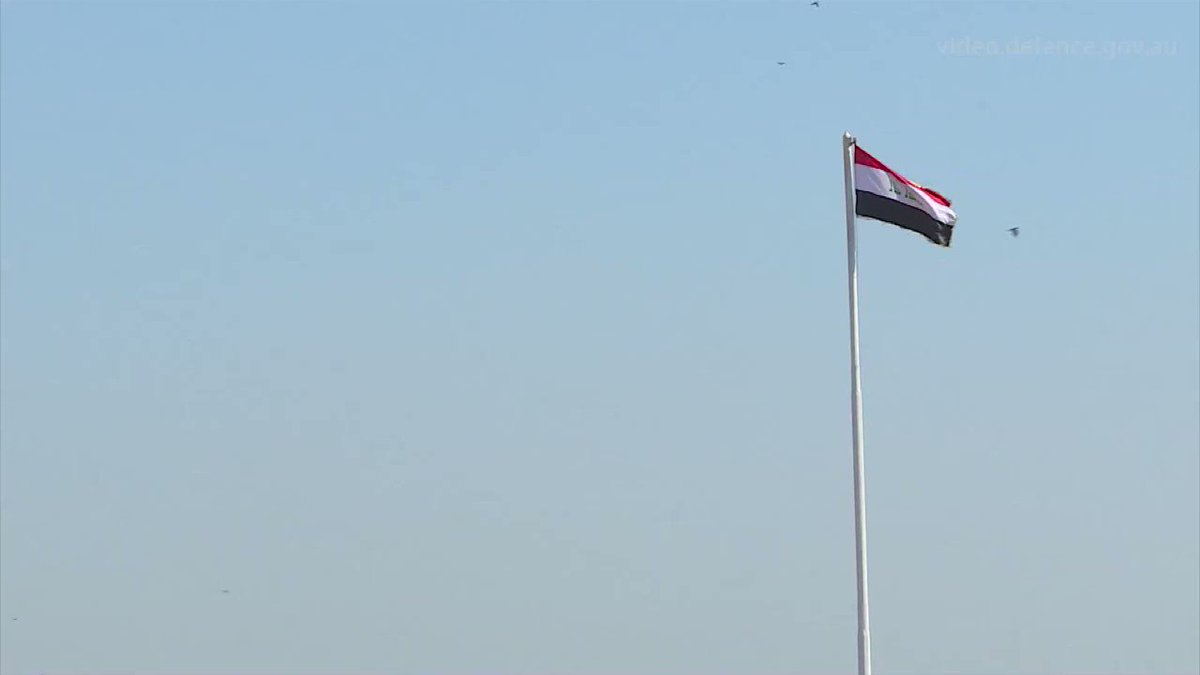 Al Jazeera NewsVerified account ‏@AJENews  7h7 hours ago
Baghdad: At least 55 killed in car bomb attack on Thursday, the latest in wave of blasts to strike the Iraqi capital http://aje.io/b6ke 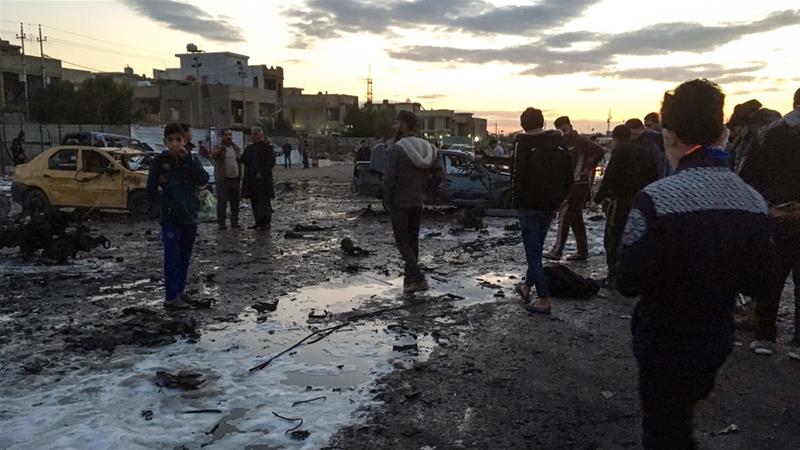 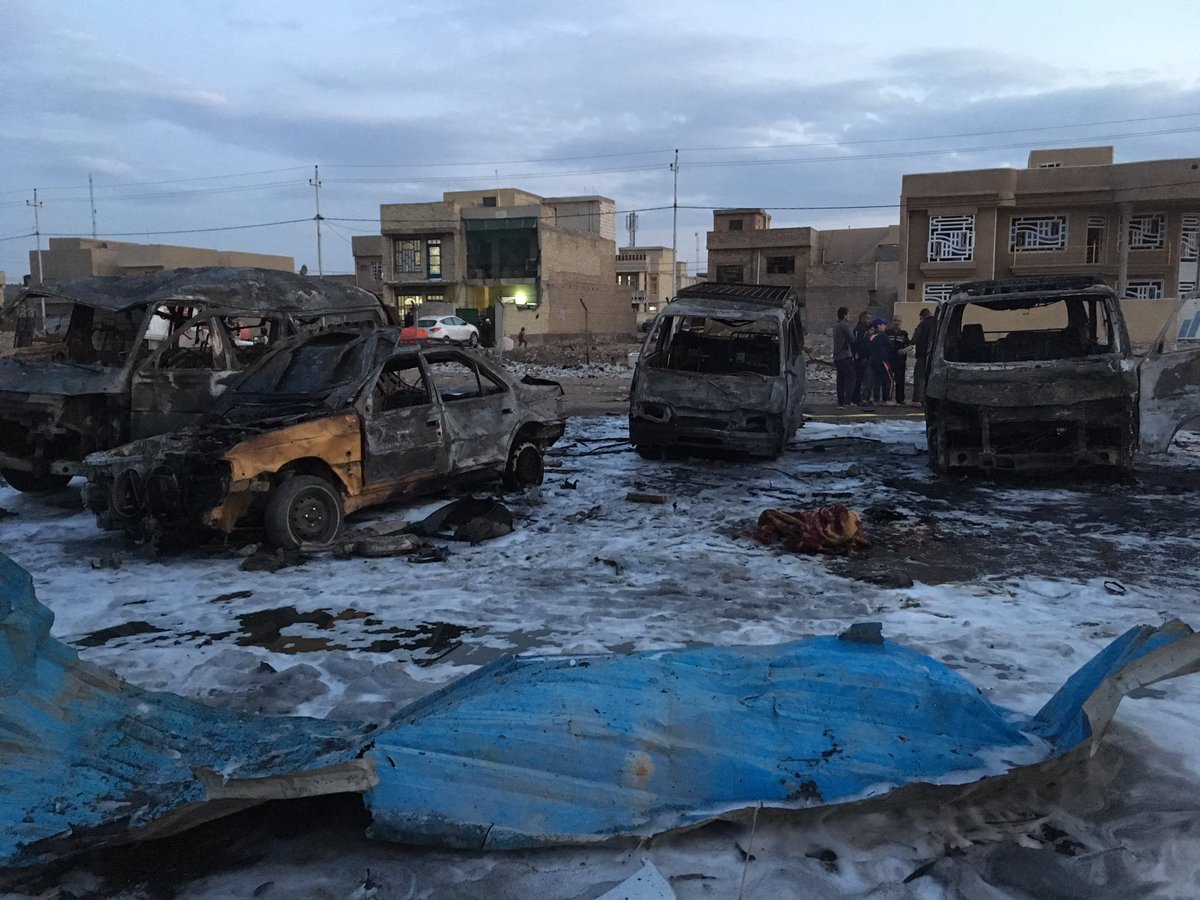 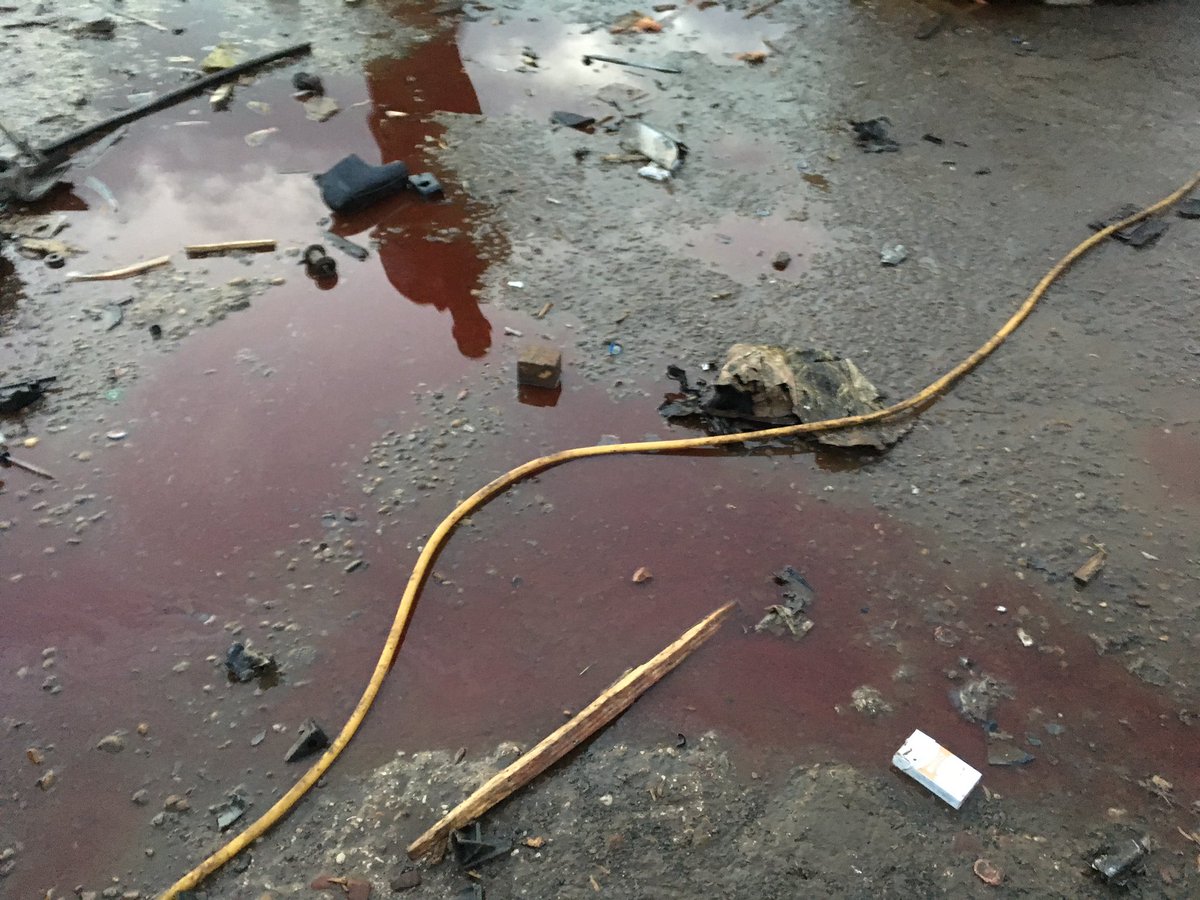 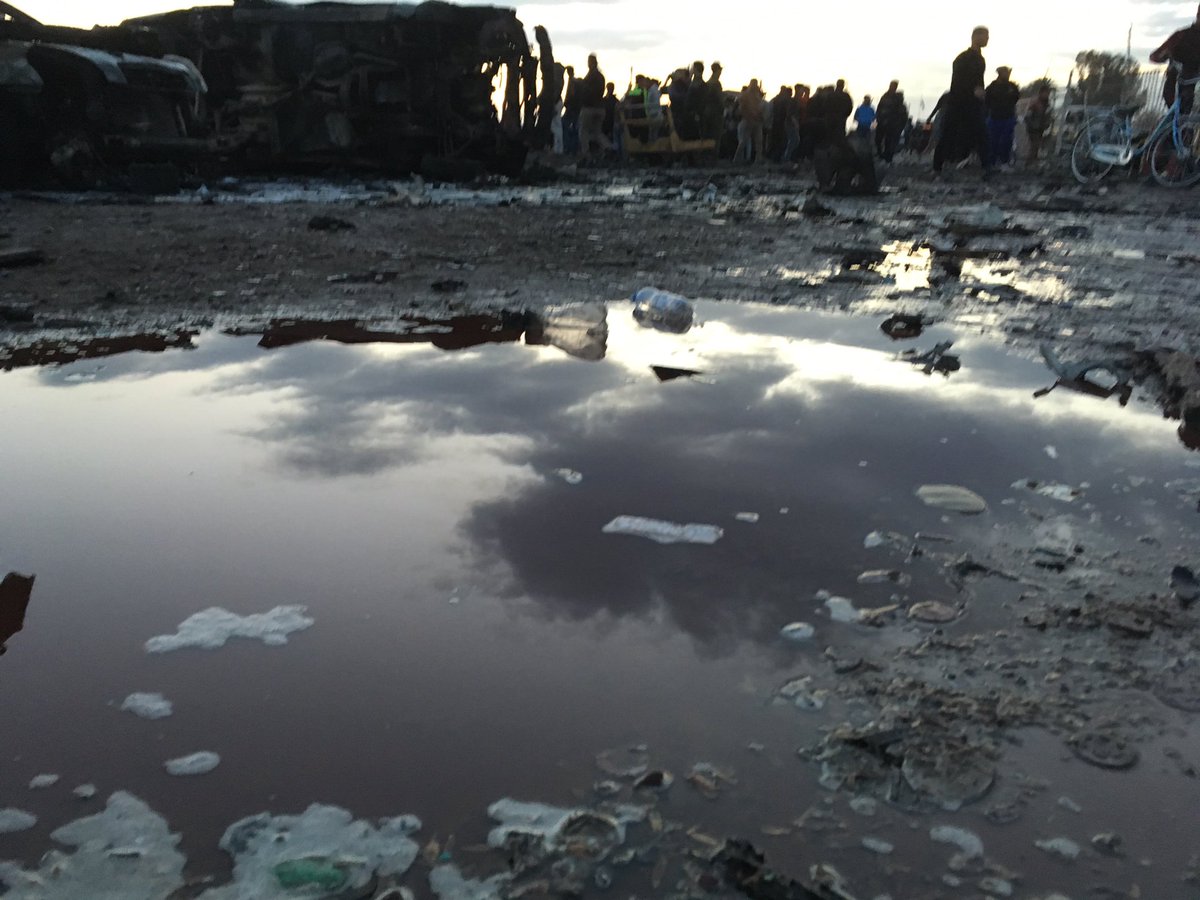 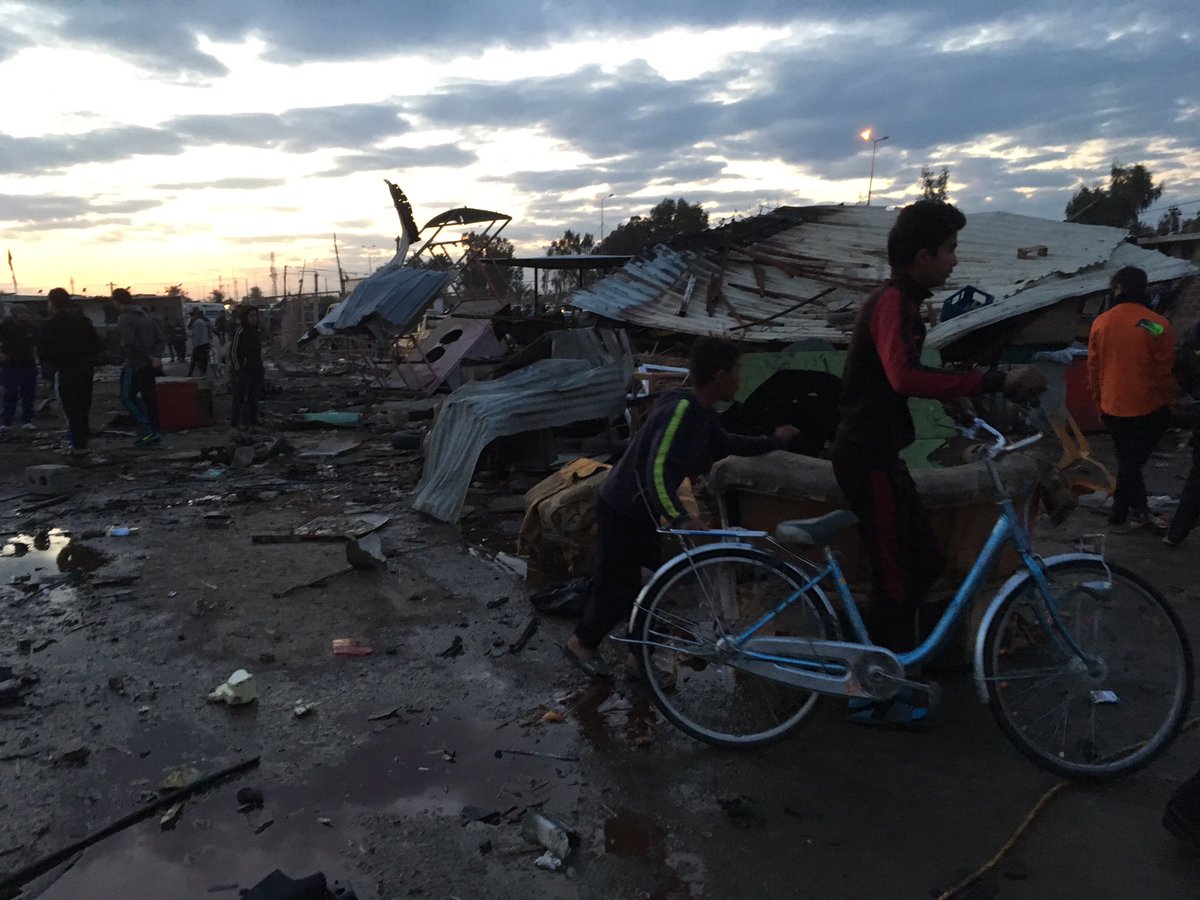