Kat: "Ooooh, I think I'm falling in love," Chaka Khan sings on "Like A Lady." 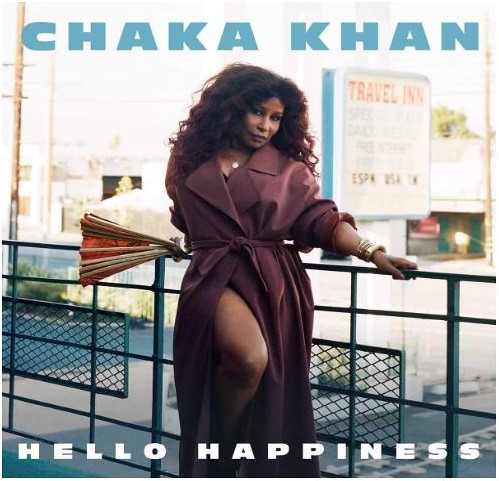 Chaka's back with her first studio album since 2007 and she's "sick and tired of boys wasting my time," she explains in the song where she thinks she's falling in love.  "Oh, my, what a sweet surprise," she sings and you believe her because she commits to it.

And she's committed to the material here on HELLO HAPPINESS.

"Don't Cha Know" kicks off with: "C'mon now, C'mon now, C'mon" followed by Chaka announcing, "I got my own thing."  Indeed she does and it's a grind-against-your-partner throw down.

If the album just featured "Like A Lady" and "Don't Cha Know," it would be cause for applause.  But those are only two of the seven tracks.  Seven?  Yes, the album contains only seven tracks.  No, that's not because they're extended mixes.  This isn't Chaka's LIFE IS A DANCE.  "Like A Lady" clocks in at five minutes.  The other six average are all less than four minutes.  But including only seven tracks might have been very smart.  It lets the album feel focused and cohesive.  There's no padding.  There's no extra.

"Ladylike" is really just a variation of "Like A Lady," recasting the song as more of a slow jam and less of a groove.  It's a bit of experimentation that pays off -- really pays off.  And track after track, that's the case with HELLO HAPPINESS.

Her vocals are amazing on this album which make up for the postponing of the Joni Mitchell album.  I hope she returns to that album (I've heard three tracks recorded for it) but even if she doesn't?  It's clearly been part of her reawakening.  Is she the Chaka we expect?

No, she's not.  She's so much more than that.  "I've got a hunger that won't let go," she boasts in "Too Hot" and you better believe her.  That song may be my favorite but, honestly, my favorite one tends to be whichever I heard last.  These are seven strong tracks.  Any could be the next single.  I'd love to see a "Too Hot" video with Chaka out on the prowl, slowly dancing from man to man.  It's a dramatic song and she really delivers -- in fact, she sizzles.

"Like Sugar" and "Hello Happiness" have already been released in the lead up to the album and they're two very different kind of tracks.  That's true for all seven but the album really holds together and cooks. HELLO HAPPINESS is easily her finest album to date.