Grading Nouri and the summit

The Arab League Summit took place in Baghdad yesterday. Al Mada reports 15 ministers attended. There are 22 countries in the Arab League. Patrick Martin (Globe & Mail) observes, "That 12 of the 22 Arab League leaders did not show up and sent lower-level envoys instead did not go unnoticed [. . .]" Hamza Hendawi and Lara Jakes (AP) put the number of Arab League leaders who attended at 10 and they pointed out that Qatar, Saudi Arabi, Morocco and Jordan were among those who sent lower-level officials to the summit. Patrick Martin explains that Sheik Hamad Bin Jassem Bin Jabr Al Thani (Prime Minister of Qatar) declared on television that Qatar's "low level of representation" was meant to send "a 'message' to Iraq's majority Shiites to stop what he called the marginalization of its minority Sunnis." Al Mada noted yesterday morning that the Iraqi public and Parliament would be judging the summit a success or not based upon whether the leaders turned out for the summit. On that scale, it wasn't a success. In other words, attendence needs improvement and absences hinder progress.

In addition to snubs and rebukes, Liz Sly, Aziz Alwan and Asaad Majeed (Washington Post) also note, "The blast at the Iranian Embassy undermined the government’s boasts that it had managed to pull off the summit without incident, although it would have gone unheard in the conference room deep inside the vast palace. Zebari and Elaraby both seemed surprised when asked about it by a journalist." Not a success.

Sam Dagher (Wall St. Journal) points out, "It spent almost $1 billion on preparations that included unprecedented security measures -- jamming cellphone networks and mobilizing 100,000 security-force members -- and rolling out a catered menu for dignitaries that featured a dessert of 24-carat-gold-laced dates." Not a success.

Al Sabaah quotes Nouri hailing the Summit as a historic moment to address the developments of the region. But, as noted yesterday, Nouri refused to do that. He played the fear card instead
Yes, it appears that once again, Nouri may have some explaining to do. It was Dr. Nabil El Araby, Secretary-General of the Arab League, who spoke to the region's higher purpose and what developments and trends meant for the Arab world.

If Nouri and the summit were Pass/Fail, they'd be graded a fail. 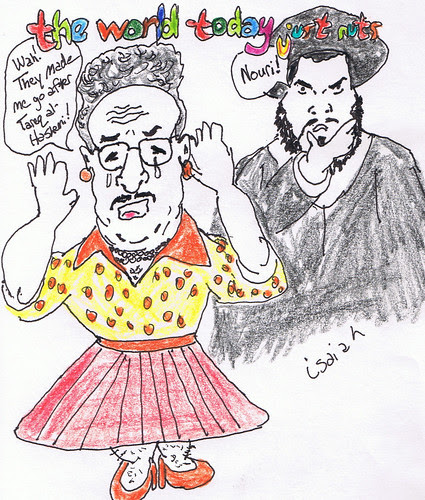 That's Isaiah's The World Today Just Nuts "Here's Nouri" and it would appear he once again has some explaining to do.