Phony Tony and his lies of war 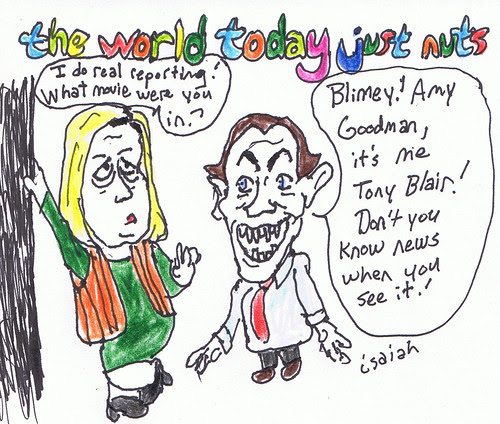 Above is Isaiah's The World Today Just Nuts "If It Stared In Her Face" featuring the Hedda Hopper of the 21st century Amy Goodman and War Criminal Tony Blair.

One time British prime minister and Bush family pet, Tony "The Poodle" Blair is back in the news cycle. Richard Norton-Taylor (Guardian) reports that yesterday Clare Short accused Blair of distorting reality in order to start the Iraq War. Specifically, he lied when he asserted the French would nix any attempt at a second resolution from the UN Security Council.

Backing up. The UN authorized weapons inspectors to go into Iraq. The UN did not authorize the war. Many citizens of the US and UK felt their rulers (Bully Boy Bush and Toy Poodle Tony) were committed to and, in fact, required to get a second resolution from the UN Security Council if war was the next step.

Clare Short was a Labour MP serving in Blair's Cabinet in the lead up to the Iraq War. Richard Norton-Taylor reports Short told an international tribunal yesterday that Tony Blair deliberately distorted the French government's attitude towards a second resolution. Short states (this is correct) that Blair maintained that the French would veto any attempt at a second resolution. (This is correct? The second resolution was established in the Iraq Inquiry. We pointed this out when the Inquiry completed their public testimony. We also noted that based on the public testimony and documents, Blair was not the passive one led by the genius Bush but, in fact, the one steering Bush through technical waters.) From Norton-Taylor's article:

The Foreign Office is trying to overturn a decision by Christopher Graham, the information commissioner, to disclose records of a conversation between Tony Blair and George Bush about the UN and the French position, days before the invasion of Iraq in March 2003.
Disclosing that the evidence was "fantastically important for the people of Britain and the historical record", Short told the tribunal.
The tribunal heard that Blair claimed that in a television interview on 10 March 2003, the French president, Jacques Chirac, said France would veto any new UN resolution backing war. This enabled Blair to argue before his cabinet, parliament and the British public that the UK could go to war with no further UN backing because of French opposition.
The tribunal heard on Thursday that what Chirac actually said was that France would reject a new pro-war resolution at that particular moment since the UN weapons inspectors had not been given enough time to carry out their mission in Iraq.

In the June 29, 2010 snapshot, we addressed the resolution at length as a result of the British Ambassador to France (2001 - 2007) John Holmes' testimony to the Iraq Inquiry. A second resolution was not desired by the US or the UK. It would hem them in. Holmes testified as to the French government's position and to being baffled that Jeremy Greenstock was told by Blair that he could not ask the French government what their position on UN resolutions were. This was during the exchange with Committee Member Roderic Lyne. From that exchange, we'll note this:

Committee Member Roderic Lyne: If the second resolution had contained a longer deadline for Iraqi compliance, do you think that France would have considered supporting it?

Ambassador John Holmes: I think it is possible because that's what essentially they were suggesting. They were suggesting -- they didn't like the six tests or whatever they were called, but they said "If you give -- if you put in a period" -- I think 120 days was the period they wanted -- "for the inspectors to operate, so they can do their job properly without being put against impossible deadlines, then that's something we could contemplate", but of course, they were still wanting to say that-that a second resolution of that kind would also not have any automatic trigger in it. You would still need to come back at the end of that, the Security Council would need to come back at the end of that, and take a view on what the inspectors were saying to them. So you know, at that stage, you were into third resolution territory. So that is a reason why we weren't particularly attracted, perhaps, to that route, but in any case in those timescales it was simply not available.
Both Blair and Jack Straw misled the British people and, later, the Iraq Inquiry. This might be further underscored if the conversation between Bush and Blair was released (that Short was giving testimony on). Joel Shenton (Public Service) explains, "The Foreign and Commonwealth Office (FCO) is fighting calls to release details of a 2003 phone call between Tony Blair and George Bush which was made just seven days before the Iraq War began."

While Labour continues to be stained by the shame Blair brought to them (and Gordon Brown as well), the member they expelled just had a surprise victory. Eddie Buckle and Robert Hutton (Bloomberg News) report that George Galloway won 56% of the vote and was re-elected despite predictions that he would lose. ITV offers an overview of his career here.


Senator Patty Murray is the Chair of the Senate Veterans Affairs Committee. Her office notes:

Hearing will also feature the stories of local veterans and servicemembers, veterans’ advocates, and businesses in order to highlight challenges and ongoing community efforts

(Washington, D.C.) –Senator Patty Murray, Chairman of the Senate Veterans’ Affairs Committee, today announced that she will hold a field hearing on the unique opportunities and challenges that the South Sound and Washington state continue to face as thousands of veterans return to the region. This official Senate Veterans’ Affairs Committee field hearing will explore how the military, veterans, business, and non-profit communities can work together to improve the transition home for those returning to Washington state. In particular, the hearing will focus on improving mental health care, employment opportunities, and community outreach for returning veterans.

The hearing will feature testimony from top VA and Pentagon officials, local servicemembers and veterans, business leaders, and veterans’ advocates. Members of the public are encouraged to RSVP if they plan to attend the hearing to fieldhearing@murray.senate.gov

Dr. Jo Ann Rooney, Acting Under Secretary of Defense for Personnel and Readiness, Department of Defense

For more information about this hearing or other activities of the Senate Veteran’s Affairs Committee, please visit www.veterans.senate.gov.

Press interested in coming are encouraged to RSVP to eli_zupnick@murray.senate.gov