Nouri's up to his old tricks 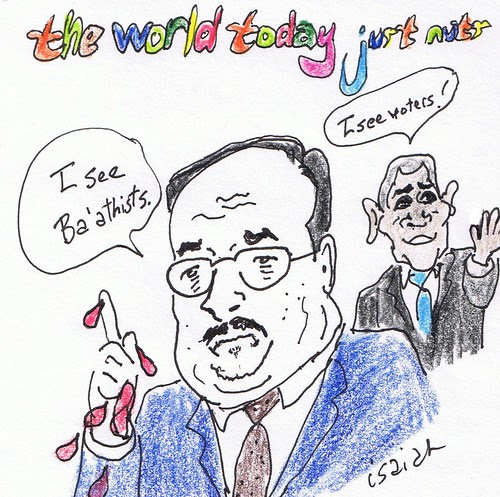 From December 25th, that's Isaiah's The World Today Just Nuts "I See Ba'athists" which is pertinent today yet again. Always looking for ways to demonize his rivals, Nouri al-Maliki is now going after Iraq's Communist Party. Al Mada reports that Nouri's security forces stormed the political party's headquarters and arrested 12 people who were arrested and questioned about protests. Ali Hussein (Al Mada) notes the Communist Party has a long history of fighting for Iraq, not against it. Hussein reports that Nouri's tanks have been sent to surround the homes of Communist Party members in Baghdad. Those who paid attention in December will remember that Nouri ordered tanks to circle the homes of Iraqiya members right before he demanded that Deputy Prime Minister Saleh al-Mutlaq be stripped of his posts and ordered the arrest of Vice President Tareq al-Hashemi on charges of terrorism. Both al-Mutlaq and al-Hashemi are members of Iraqiya as well as Sunnis. Ali Hussein notes that Nouri also ordered tanks to circle the homes of Communist Party members last year.


Meanwhile Alsumaria TV reports Foreign Minister Hoshyar Zebari declared today that Arab states have sent 12 Foreign Ministers to Baghdad thus far for the Arab League Summit. KUNA adds that Zebari "announced its [Iraq's] full support of the effort exerted by the joint envoy of the United Nations and Arab League Kofi Annan to end crisis and violence in Syria, while stressing its opposition to foreign intervention in the Arab country." The Foreign Ministers are meeting today. Nouri is supposed to deliver a speech today. The Washington Post's Liz Sly Tweeted:

Wonder how Iraq PM Maliki's rather hectoring speech to AL FM meeting in Baghdad went down with the Arab dignitaries. #ALIraq

AFP notes, "Iraqi President Jalal Talabani has accepted the credentials of the first Saudi ambassador to Baghdad since Saddam Hussein's 1990 invasion of Kuwait, the president's office said on Wednesday." Al Jazeera splashes some reality by explaining:

For the first time since that conflict, Iraq also officially received an ambassador from Saudi Arabia, Fahd bin Abdul Mohsen al-Zaid, though he will function only as a "non-resident" ambassador and is already the Saudi envoy to Jordan.
The summit was not particularly well attended. At least five countries sent foreign ministers, including Bahrain, but both Qatar and Egypt did not send their top diplomats, and others were absent.


Senator Patty Murray is the Chair of the Senate Veterans Affairs Committee and we'll note two things from her office. First, on the issue of homeless veterans in her state of Washington:

“This is a huge boost for efforts to get homeless veterans in our state into stable housing,” said Senator Murray. “Each one of these vouchers means a year’s rent for someone who has sacrificed for our nation but is now sleeping on our streets. With new servicemembers returning home every day and the economy sputtering, we must step up our efforts to provide all veterans with housing and the dignity that comes with it. We owe it to our veterans to provide them with the resources and support they need to put a roof over their heads.”

Today’s announcement is part of an allocation of $75 million that will be distributed to local public housing agencies across 50 states and provide help to an estimated 10,500 veterans. Senator Murray included the $75 million for this program in the 2012 Transportation, Housing and Urban Development (THUD) Appropriations bill, which she oversees and which funds the Department of Housing and Urban Development (HUD).

The following is a list of Washington state housing authorities and corresponding VA facilities that will receive HUD-VASH vouchers and the number of vouchers they are set to receive:

(Local Housing Authorities and VA facilities work together to administer this program.)

And on today's questions about the PTSD diagnoses:

TODAY: Senator Murray to Question Army Surgeon General on the Handling of Mental Wounds of War

At Hearing of Defense Appropriations Subcommittee, Veterans Chairman Murray will press the Army Surgeon General on troubled PTSD unit at Joint Base Lewis-McChord and whether similar problems exist at other bases

(Washington, D.C.) – Today, U.S. Senator Patty Murray (D-WA), Chairman of the Senate Veterans’ Affairs Committee and a senior member of the Defense Appropriations Subcommittee, will question Army Surgeon General Lieutenant General Patricia Horoho on recent shortcomings in the Army’s efforts to properly diagnose and treat the invisible wounds of war. Specifically, Murray will discuss the forensic psychiatry unit at Madigan Army Medical Center on Joint Base Lewis-McChord that is under investigation for taking the cost of PTSD into consideration when making diagnosing decisions. The Army is currently reevaluating over 300 servicemembers and veterans who have had their PTSD diagnoses changed by that unit since 2007. Murray will ask whether similar problems are happening at Army bases nationwide.