"Had this money gone to the people in need for housing or other needs, it would have at least raised the living standard of people from the lower class to at least the middle class," declares Iraqi Abul Assal in Kelly McEvers report for All Things Considered (NPR). 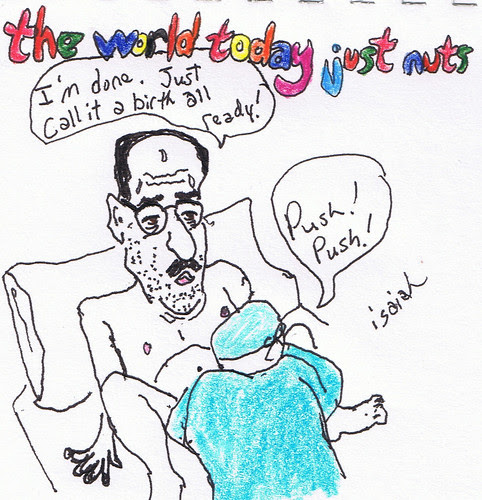 That's Isaiah's The World Today Just Nuts "Not Quite There."

Yes, the Arab League Summit has finally arrived. To celebrate, fire works were set off. Oh, wait. Those weren't fire works. Suadad al-Salhy (Reuters) reports it was a rocket attack on the Green Zone. AP adds that an unnamed official says it landed close to Iran's Embassy in Baghdad. Yes, as Kitabat obsevers, the Arab League Summit is back in Iraq for the first time in 22 years. Kitabat notes that UN Secretary-General Ban Ki-moon has arrived. The Kuwait Times quotes the Secretary-General stating, "The relationship between Iraq and Kuwait has always been very sensitive, and there are many pending issues that have not yet been resolved. I urge Iraq to fulfil its longstanding obligations to Kuwait…especially in regards with the missing people, Kuwaiti property, compensation." Alsumaria TV adds that Ban Ki-moon stressed that Iraq paying off its debts to Kuwait will allow it to exist Chapter VII. Al Sabaah notes that Iraqi President Jalal Talabani met with Ban Ki-Moon today. In addition, Al Mada reports that the President met with Ikililou Dhoinine who is the President of Comoros (and was the first leader to arrive in Baghdad for the summit).

Nouri spoke to the foreign ministers of various countries yesterday. Al Rafidayn covers the speech which included Nouri noting terrorism in Iraq (sadly, he wasn't confessing to his own terrorism) and declaring that all Arab nations will face it -- especially those in which the security is fragile -- so he was calling for an Arab cooperative to fight terrorism in the region. His speech is said to have bored (said by a friend covering the event and a friend at a wire service). That's not surprising. On your first day of a conference, you really aren't looking to be bummed out. You're looking to be uplifted.

Nouri's heavy-handed and rules through fear. He thought he could apply the same scare tactics in dealing with foreign ministers of other countries -- none of those present face the level of violence Iraq does. So not only was the topic a 'downer' but they really didn't see the need to be lectured to on the topic of violence from the person over the most violent country in the region. Nouri's so out of touch that he honestly believes other leaders in the region would be impressed with him. His calling for cooperation on positive projects and issues would have surprised them and would have impressed them. Instead, he's the crazy troll under the bridge and he's got no one to blame but himself (and his advisors who thought his speech would go over well).

When the summit (which began in Baghdad at noon today) comes to an end and Nouri's still the same lowly, cheap thug he was before the summit, remember he has only himself to blame for that.