Powdering and preening for the Arab Summit 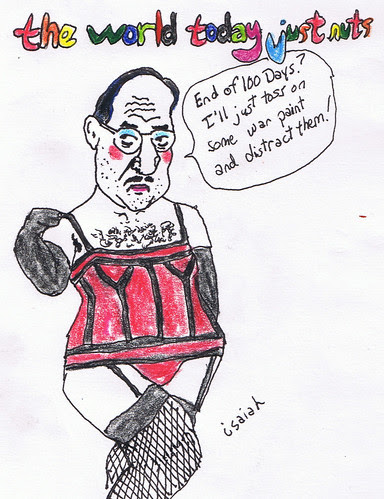 Above is Isaiah's The World Today Just Nuts "The Plan For Day 101." And Nouri can dress Baghdad up all he wants for this week's Arab League Summit, it's still Baghdad, no matter how much paint and eye liner he tosses on. Sam Dagher (Wall St. Journal) reports, "Nearly $1 billion has been spent on sprucing up a capital racked by years of conflict, and close to three million flowers and a half-a-million trees have been planted for the occasion. Baghdad International Airport will be shut to civilian traffic and some 100,000 army and police have been mobilized to secure the visiting Arab dignitaries". Alsumaria TV adds that over 500,000 trees and plants have been added to the streets and entrances of the Green Zone and Baghdad International Airport. Some of the trees are date palm trees, some of the plants are rose bushes. None of which covers over Kitabat's report that Iraqi children are forced labor working for hours on end for little pay at a brick factory just outside of Baghdad. No, Nouri, all the rose bushes in the world won't take away the stench of a child sweat shop where young children labor for 14 hours a day.
Not will it conceal the true state of Iraq. Farirai Chubvu (New Era) explores those realities today:

Today, nine years after US troops toppled Saddam Hussein and just a few months after the last US soldier left the devastated country, Iraq has become something close to a failed state.
Prime Minister Nouri al-Maliki presides over a system rife with corruption and brutality, in which political leaders use security forces and militias to repress enemies and intimidate the general population.
The law exists as a weapon to be wielded against rivals and to hide the misdeeds of allies. The dream of an Iraq governed by elected leaders answerable to the people is rapidly fading away.
The Iraqi state cannot provide basic services, including regular electricity in summer, clean water, and decent health care; meanwhile, unemployment among young men hovers close to 30 percent, making them easy recruits for criminal gangs and militant factions.
Although the level of violence is down from the worst days of the civil war in 2006 and 2007, the current pace of bombings and shootings is more than enough to leave most Iraqis on edge and deeply uncertain about their futures.


A member of Parliament's security committee tells Al Rafidayn that Baghdad lacks "intelligence capabilities" and some of the "necessary equipment." However, Kitabat notes a rocket attack was foiled or is said to have been foiled.

Al Sabaah reports Comoros President Ikililou Dhoinine is the first Arab leader to arrive in Baghdad for the summit. It's not often that the president Comoros (whose total population is less than 800,000) gets to garner international headlines.

Al Mada reports on Foreign Minister Hoshyar Zebari's Monday press conference where Zebari stated 21 countries would be participating in the summit, that Syria wasn't invited and the newspaper notes that Syria is expected to be a major part of discussion at the summit. In another article, they quote him stating that the summit will send an important message about how Iraq has integrated into the Arab world. Al Sabaah runs a photo of Zebari from the press conference. Al Mada notes that Nouri has ordered a stop to the protests against Bahrain for this week.

Nouri would also like to keep the political crisis in Iraq off the summit radar (though everyone participating will already be aware of it, his aim is to make it appear that the crisis hasn't effected anything and that the press has played it up as more important than it is). Al Rafidayn notes that Speaker of Parliament Osama al-Nujaifi met with Vice President Tareq al-Hashemi in the KRG (at Nujaifi's home). They discussed the summit and the ongoing political crisis -- including the warrant Nouri has sworn out on al-Hashemi. (Not mentioned is the death of al-Hashemi's bodyguard this month while in custody of Nouri's forces but since al-Hashemi gave a speech Sunday stating he was tortured to death, you can be sure that came up as well.) Al Rafidayn also states that Iraqiya is planning to boycott the April 5th prep meeting for a national conference to resolve the political crisis unless Nouri honors the Erbil Agreement.